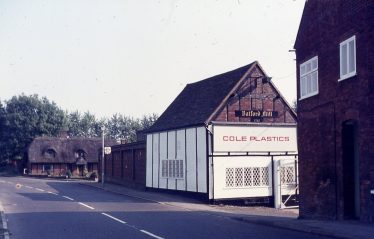 William Freelove Divers, who owned Batford Mill in the 1850s-1860s, was born in 1817 in Tewin.  His parents were William Freelove Divers and Mary Ann (Ayling) Divers.  He married Maria Finch on 8 Aug 1860 in Leverstock Green, Hertfordshire.  There were three children born to this union:  Maria Jane Divers (1861-1933),  William Finch Divers (1863-1922) and Florence Divers (1865-1919+).  The two girls Maria Jane and Florence married two brothers, Frank and Harry Elliott.  William Finch Divers never married and in 1906 went to Australia and became a Miner and Prospector returning to England in 1921.

William also owned the original family farm, and in the 1851 census, farmed 180 acres and along with Batford Mill, employed 9 men and 2 boys.  He died in 1866 and it is possible Batford Mill was sold. However, his brother, Henry (who never married) was also a Farmer and Agriculturist and later a Farm Bailiff. In 1871 Henry and his two sisters, Mary Ann and Clara (who also never married) were all listed in the census as Land Owners in Harpenden (I believe Gore Farm) and were living on Great Railway Rd, Harpenden.

I live in Saskatchewan, Canada and have been researching my Divers ancestors for the past 15 years.  I would sure love to hear from anyone else who may be able to fill in some blanks.

Editors note: we have so far not identified Gore Farm – might it have been Great Northern Farm (formerly New Farm) between the station and the river Lea – later to become Pinney’s garage, and now redeveloped as St Stephen’s Court?