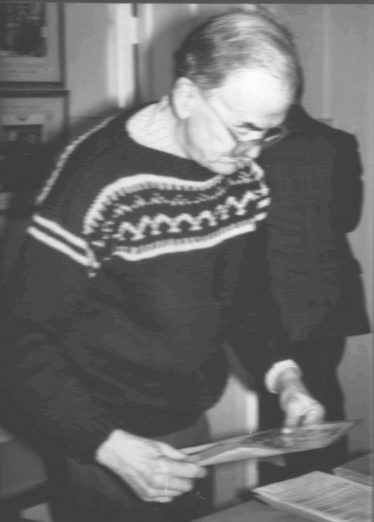 Pat Wilson at work on documents and photos – Les Casey

Pat Wilson died in Cornwall at his daughter’s home on 6 November 1988, aged 78. He was a working member and in due time Vice-president of the Harpenden Society and a founder member of our Local History Society. That he should have been so arose naturally from his intense interest in Harpenden, its people, its future – and also its past, since settling in Batford [5 Salisbury Road] in the 1950s.

We in the Society recall his dogged persistence that a Local History Centre should be established as a focal point of our activities. He won through with officialdom, though we may at times have wondered how. In 1979 the Centre [in the cottage attached to the rear of Harpenden Hall, formerly Harpenden Urban District Council offices] became a reality and a part of the life of Harpenden.

Pat was a man of peace, with great hidden strength: a man of vision, kindliness and wit, ready to use his professional skills as an architect for the benefit of the community. We remember him with respect and affection and are deeply grateful for all that he did for the Local History Society.

Pat was also involved in 1961 in the building, largely by voluntary labour, of the first stage of Batford Memorial Hall. Stage 2 followed in 1964. He gave long service on the Management Committee. He worked with the Rector, the late Canon Peter Bradshaw, on the opening up in 1962 of the chancel and sanctuary of St Nicholas Church and the moving of the organ to the west end.

Architect of All Saints Church

With the post-war increase in the number of people living in the Lea Valley area the old All Saints’ mission room (opened in 1889, thrice extended and now demolished) in Coldharbour Lane became far too cramped. In 1955 Mr Dolphin Smith, a local farmer, gave river-side grazing land close by Pickford Bridge for a new church. A Building Fund was opened. Pat, a member of the congregation, insisted that the land be cared for and trees planted. In 1961 a Planning Committee was set up and again it was natural that Pat should be appointed architect. Together they worked out needs, studied photographs and visited new-built churches. Pat roughed out sketches, gradually worked up through discussion, financial constraints and statutory approvals into final drawings and the choice of every-day materials. Work began in 1964: on 26 May 1965 the present All Saints Church in Station Road was consecrated. Pat worshipped there for some years and then joined his wife, Mary, in membership of the Society of Friends.

Pat took a leading part in the movement to preserve the amenities of the Lea Valley, following the closure of the Dunstable to Hatfield branch railway line in 1968. 1972 saw the eventual formation of the Upper Lea Valley Group, with Pat as enthusiastic Chairman (later Secretary), participating to the full in the physically demanding and often muddy work of waterway clearance, rebuilding weirs, tree planting and the establishment of the Lea Valley Walk from Westfield Road to Leasey Bridge.