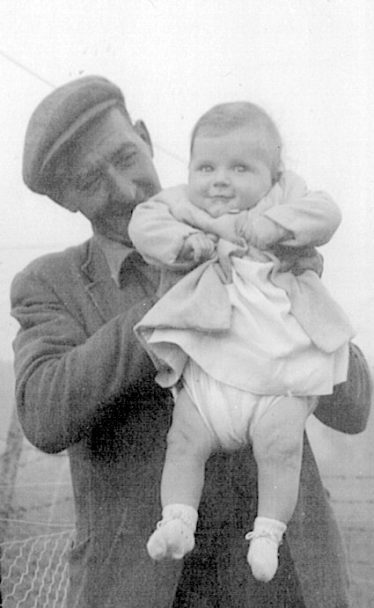 Clive Hobbs now lives in Australia, and has been browsing the Harpenden History website: 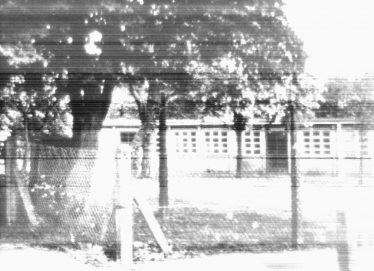 Well, thanks to Geoff Woodward for the article on Batford. I learnt a lot from it that I didn’t know, particularly about the pre 1950s. Reading through it, memories of those early days started to come flooding back.

Mr Bingham at Bentleys…..My mother used to walk me from the top of Porters Hill down to the Nursery school that was then on the corner of Carisbrooke and Langdale avenue. Her friend Win Hills was the postmistress at Bentleys and she would call in for a natter as we were passing and I would love to go with Mr Bingham out to the back yard of the store and burn the discarded cardboard cartons…

Incidentally, my peg at the nursery was a butterfly…………

I remember the footbridge being installed over the Harpenden East railway; also the tubular bridge over the River Lea, but can’t recall dates. In the playing field going from Bentleys down to the River Lea I remember that there was an old WWII pill box that must have been removed in the late 50s.

The Almagam factory……One of my first memories was being pushed in the pram to the Coronation celebrations in the village and I distinctly remember the front wall of the Almagam factory being decorated with an array of coloured lights for the occasion.

The chippy by the river…..sixpeneth of chips………wow, what a treat that would be on a Saturday night! The bike shop at the side of the chippy was run by Mr and Mrs Keen from Porters Hill. He started off in his back shed repairing bikes for people on the Estate: what a lovely generous family they were.

I came to grief one night crossing the road at Batford Corner. I had just left Edwards shop, it was dusk and I walked into the path of a cyclist who had just finished his shift at the Almagam. His lamp bracket on the front of the bike made a small cut in my left cheek.  I still bear the scar today. George Murphy was on the scene in a flash and took me into his barber’s shop where the damage was assessed before sending me on my way. What a great community. That happened right where the gate was that you spoke of Geoff and I never had any idea as to why that gate was there. I do now.

The first bus run via Batford Corner to the village I recall was the 391 service and it used to cost 3 old pence for the trip. Later it became the 355 and eventually serviced Pickford and Milford Hill. 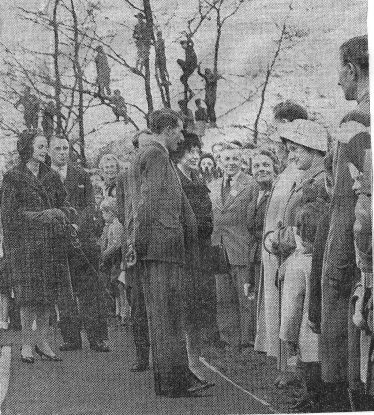 Royal Occasion:  When Princess Margaret came to plant a tree at the new All Saints Church on the site opposite Coldharbour Lane. The Harpenden Free Press had a photograph of some of the local boys climbing into the trees opposite the site to get a better view. I was one of them…

Tobogganing in the Dell

I well recall the winter snow experiences that Geoff referred to when all the trades people attempted to negotiate both Pickford and Porters Hill and very often had to leave their vehicles on the flatter roads and deliver by hand. 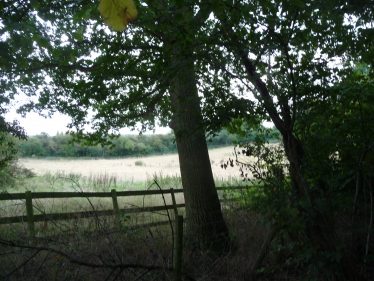 The Dell behind Whitings Close in late summer. Perhaps someone has a photo of winter tobogganing?

For the kids on the estate when snow was on the ground, “The Dell” was the place to be with your sledges (toboggans) all home made of course knocked together from fruit crates with the steel strapping fixed to the runners. The Dell is an area behind Whitings Close. To reach it there is a pathway at the north eastern end of the close with a gate at the bottom of the path as you enter the field. I don’t know how the large dip in the landscape occurred but a few hundred yards up into the field there is a large depression in the landscape that acted perfectly as a sledge run. The competition was always to see whose sledge could go the furthest.

I wonder if it is still used by the local children these days?

Another great Autumn event was of course bonfire night. I can think of at least 6 areas on the estate where the local kids would build their bonfires, the competition was fierce and raids were often carried out on other area bonfires to increase the size of the stack. There were no prizes of course but just the opportunity of chest beating to know that we had the biggest.

The grassed oval at the top of Porters Hill was the place for weekend opportunistic soccer matches, usually coinciding with exciting national league victories that would inspire soccer action.  Players coming from Whitings Close, Noke Shot, Milford Hill, Northfield Close, Batford Road with teams being picked by the toss of a coin and then personal selection that as always left the weaker players until last. The only down side to this of course was the ball being kicked into local gardens and the keen gardeners not particularly happy.

Looking back I don’t believe that we realized at the time what great community we had then.