No.126 Southdown Road is on the corner of Cravells Road. This was a greengrocers run by Harry George Read prior to 1945 and for a while afterwards. 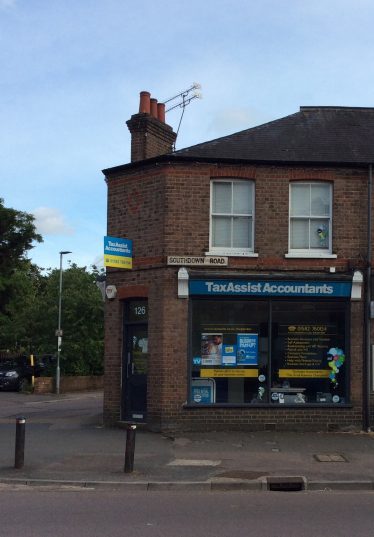 Harry George Read married May Dilley (of Stotfold) in 1929 and they had a son Derek Philip Read and a daughter Margaret Diana Read (known as Diana) I was 15 years younger than Derek. We lived at the back and above the shop at No.126 until some time around 1950 when Harry and May had a house built in Grove Road, known as ‘Maytrees’, 101 Grove Road, next to the Atlas Basket Factory.

Harry outside 126, decorated probably for the coronation, 1937

Part of the land was Harry’s smallholding for the storage of produce for the shop and the growing of produce for sale. He also had pigs. There was a large barn to the right hand side, also another shed off of the entrance to the smallholding side and Harry built a ‘cold’ storage unit to enable him to keep produce for longer. There were also another shed or so and a large saw area and other machinery. On the right hand side of the land (Basket Factory side) there were three greenhouses and pig styes. May had part of the land nearer the house for her chickens. 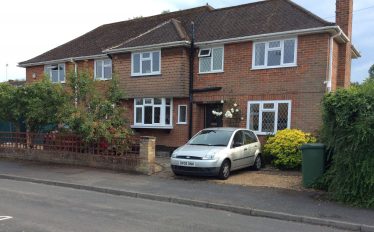 Some time in the region of 7 years later they sold the land for the building of bungalows to a Mr Spence (I think that was his name, he had a rather unique car, think it was pale blue, but I digress). The building of the bungalows took up the frontage which ‘Maytrees’ had onto Grove Road and a new road was built in front of the house. That is now Hawthorn Close and their house became No.1. The house has been extended on the left hand side incorporating the entrance to the backdoor and extending up and over the garage.

During the time they lived in Grove Road Harry bought another shop in Harpenden  Lower High Street (no. 13) next to Bunty’s sweetshop. Street view shows Bunty’s now, in 2020, to be a Cancer Research Charity shop. 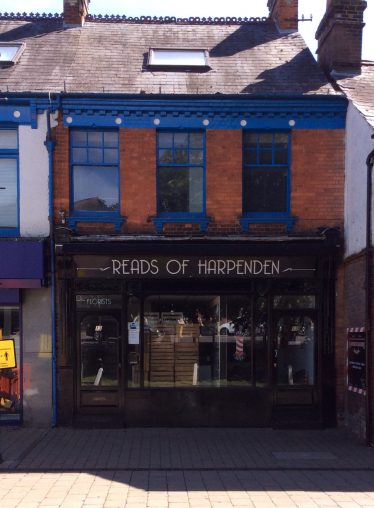 This was the shop in which his son Derek Read worked along with another man and a lady, Mrs Burdett (not sure about the spelling of her name).  Shortly after Harry got the shop in the High Street he gave up the lease of the shop in Southdown Road. 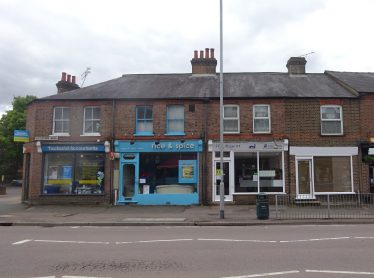 If I remember correctly the freeholder of the Southdown shop was Mr Ward who had the grocery shop at no.124  From what I can remember Mr Ward’s wife seemed to be incapacitated as I can remember visiting her in bed. The rear access to both shops was from Cravells Road and was a shared one. The grocery shop was dimly lit and there were sacks of produce on the floor. The contents were scooped out into blue paper bags. I think the main counter was on the right hand side and there were scales on the opposite side as well as the counter side. Along from the grocery shop there was a shop selling sewing items and a sweet shop.

As you can appreciate I was only very young when I lived at the shop in Southdown Road but on street view it appears the same as it was then. It is now a Tax Assist Office.  I was born at the end of the Second World War. 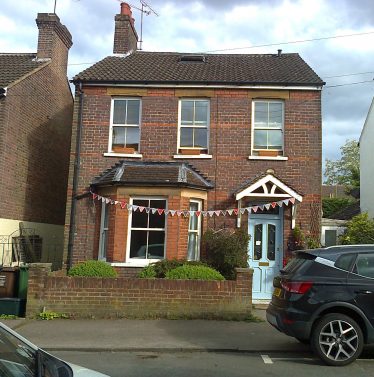 Harry George Read was one of two sons whose parents lived in Coleswood Road (no 18). Harry’s brother Cyril, married a girl called Ida and they had two girls, Sheryl and Vicky. I can remember going to both Oggelsbys Garage and Putterills Garage with my mother. Also many more memories which I am trying to put into some sense of order. Unfortunately people are passing by this point in time, as my brother Derek unfortunately has a few years ago.

Derek married Barbara who was from Batford and they lived in Grove Road  for a short period of time with my mother’s father in a bungalow (no. 58) which May bought, this was virtually opposite the entrance to the smallholding. 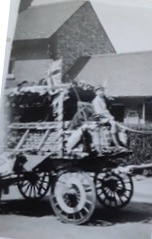 Derek and Barbara moved to an apartment and they had two children, Marion and Christopher. They then moved to a lovely house in Dalkeith Road (no. 52). Marion left England and went to study in Berlin and still lives in Germany, no children. Christopher lives in Welwyn Garden City and has two children Matthew and Elizabeth. Elizabeth is married and lives in Harpenden. Derek’s wife Barbara is still alive and has just had her ninetieth birthday, she lives in Biggleswade.

Note: There is no known connection with the Read’s Motor Works family