Memories of Life at number 26 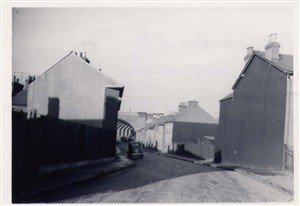 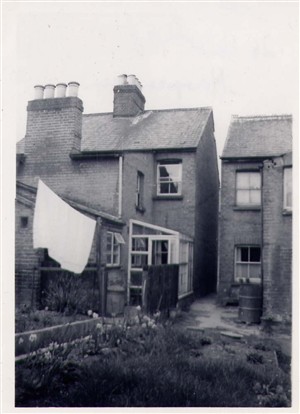 Heath Road ran from Queen’s Road to Southdown Road, close to the SkewBridge, with Cross Street half way down on the left.  By 1962 the cottages on Cross Street and those facing on to Southdown Road, including some shops, had been demolished, as they often suffered from flooding.  The whole area was cleared in the later 1960s, to make way for the newly aligned Bowling Close and Heath Close – a Harpenden Urban District Council development of flats and small terraced houses.

We occupied 26 Heath Road from July 1962 to August 1964, at a rent of £4 per week.  This was a semi-detached two-up two-down cottage, with a small third bedroom a step down from the back bedroom, over the kitchen.  The rooms were 10ft by 10ft, and the stairs went up between the two main rooms.  The rear view shows that the outside toilet adjoining the kitchen had been incorporated as a small bathroom accessed through the kitchen.  A ‘conservatory’ had been added alongside the kitchen.  The back living room had a fireplace with back boiler, but in the bitter winter of 1963 the tank in the loft froze, nearly causing disaster.  Ice formed inside the windows, and our thermometer in the front room read 29°F over several days.

The cottages either side had long-standing tenants, who had brought up large families.  Mr Hawkins at no.28 kept pigeons.  Mrs Halifax at no.24 still had a toilet accessed from outside, and was adamant that she did not want it modernised.

Further down the hill on the right was a meeting room for the Welcome and Rovers football club.  A dog called Toby spent much of his time lazing in the middle of the road.