Southdown - Heath Road - We called it The Borough/Burrow

Reminiscences from the 1930s 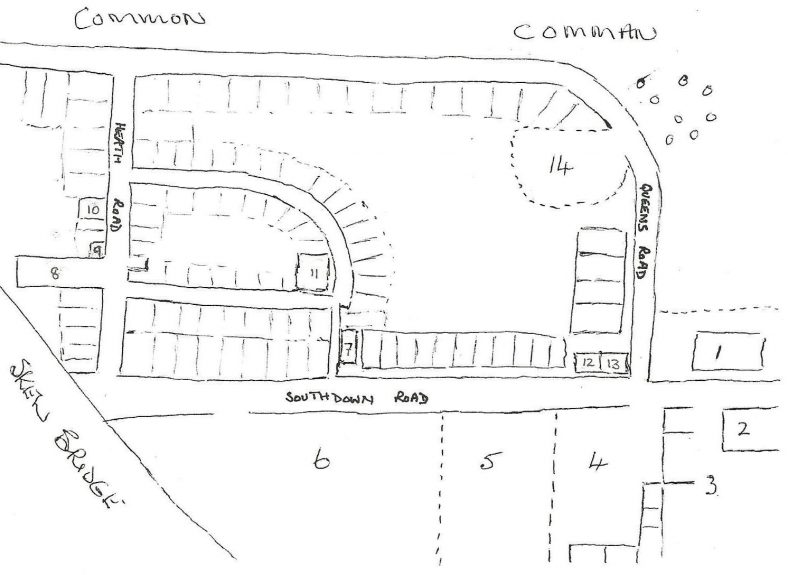 (The numbers refer to those on the sketch map). 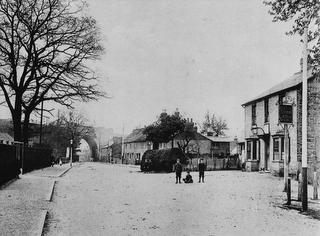 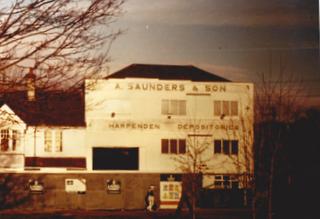 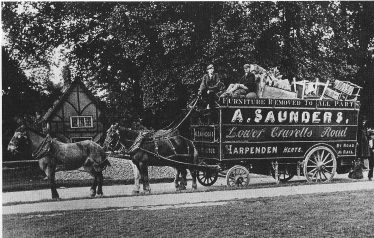 A Saunders horse drawn van c1912. Note it still had the old address of Cravells Road on it. Credit: Fom Harpenden in Old Picture Postcards by Eric Brandreth

2. Opposite was Mr & Mrs Saunders house, the Office was on the right of the entrance and the Furniture Store, Garage and Workshop (3) at the  back up to the railway bank. (Replaced by Kings Court).

Saunders & Sons was run by Mr Saunders with a colourful Manager whose name escapes me at the moment but he was arrested for discharging a pistol. Then came Mr Cully as general manager; Mr Rob Andrews was the mechanic helped by a Mr Sparks and also a body builder, a Mr Halsey. We called Mr Saunders “Abe” behind his back – he was stern man or that was the way he appeared to us, but he was always ready to listen and help if possible, He had two sons, one was an Accountant and lived in West Common – I just cannot remember his name but he did pop into the business from time to time. The other, Ken, ran the furniture side of the business.

4.  This was the Council Yard with open sheds to the left hand side and rear, later used by A. Saunders for parking vehicles and storage etc.

5.  Was Mr Saunders’ allotment, looked after by an old retired employee Mr George Russell. They were kept pristine and if entered into any show would have won a prize. George also looked after the front garden of the house. He must have been into his 70s but could out-work most other people including me.

6. Was known as the cart yard where vehicles were parked, there were 2/3 old vehicles or trailers parked here on which were kept two hand-built box bodies. When an extra box vehicle was required we backed up a flat-bed vehicle to the front of trailer; put pieces of round pipe underneath and pushed/pulled the box into position on the flat vehicle where it was then tied down.

We had a number of four wheeled vehicles which had no starters, so in the mornings if you had one of these to drive you had to go into cab, lift bonnet and put a short length of pipe over the engine primers and pump up, then out of cab again push down the decompresser handle and swing as fast as possible on the starting handle. When you had got a good speed up then you pulled up on the decompresser handle and hopefully it would fire up. In the winter we helped each other to start our vehicles.

7.  Nearly opposite to the entrance to the cart yard was a narrow brick paved alley with Warwicks Fried Fish Shop fronting Southdown Road. It had a big gas light on the wall which showed light on the shop and the alley. Along to the left of this were a number of very small cottages very close to the road with very little footpath. When it rained these houses were covered by mud thrown up by passing vehicles, buses etc.(and they were liable to flood in heavy storms – ed.) 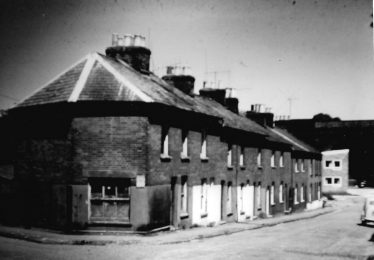 On the left hand side about 30 yards up was a yard once owned I believe by Mr Sam Rolt, another haulier but he used horses rather than motor vehicles and was later taken over by A. Saunders. 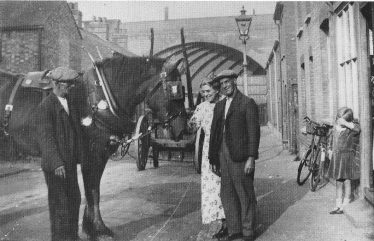 Heath Road; outside Parcell’s shop; the Skew bridge in the background. 1930s.

Next door to this entry was the Bakery (9) owned and run by Mrs Parcell and her son Bill, a very big man who was always laughing; he did the baking and deliveries with his little van. As you entered the shop you had the oven right in front of you and the counter to the left behind which sat Mrs Parcell always wrapped up in a black shawl, wearing glasses and knitting, two lovely people. 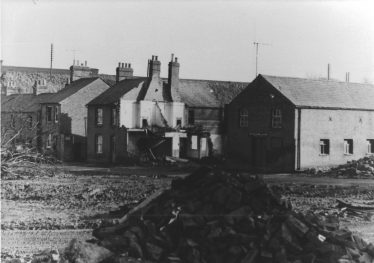 10. Was the Rovers Youth Club which ran a number of football teams for local youngsters and was used as a youth club by the young boys locally.  It was run by Mr Jim Pierce, who worked at Grays Grocery Shop on the green. At the top of the road was the Common, on the right was a road which ran around the back of Heath Road, at the corner was a shop run by the Misses Slough (11) which sold sweets, cigarettes etc, opposite was a small house with a lovely front garden (could this have been where George Russell lived?) 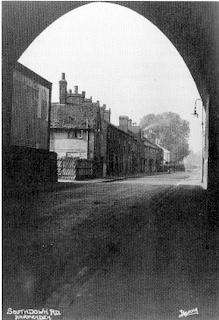 Cottages along Southdown Road from the Skew bridge. The entrance to Heath Road on the left. 1930s

Through the alley by the fish shop back to Southdown Road turn left along the front of more small cottages but with little front gardens with railings, then you come to “Scalpers” the Barbers (12) owned by Mr Ted Simpson which had a counter on the left as you went in where you could buy cigarettes etc; the barber’s shop was at the back. Ted had large photographs of footballers on the wall here probably to take your mind of the pudding basin cut you were about to get. Next door was Mr Bandy who owned the Bike Shop (13) where he would repair your bike if you had the money, however, you never walked along the front of his without looking skywards to see if the bedroom window was open as Mrs Bandy often threw the contents of their night bucket out into the road. 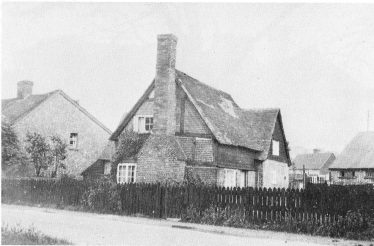 Around the corner into Queens  Road and there were about six thatched cottages with small front gardens and little porches held up by round timber, then you had Watlers Farm right on the corner (14). He had a few cows which quite often would be out grazing under the few trees opposite on the common under the watchful eye of Mr Edgar Minney the cowman. We often saw these on our way home from school.

John’s father, Mr William James Reeks, lived in and around Harpenden mostly in Grove Road, in the period around 1920 until his death in 1960  and his mother continued to live there until her death in 1983. The house was rented from a Mr Cole a local farmer. John knows that his father worked at the gas works and for Mr Charley Sibley, a well borer, and as a gardener at Aldwickbury Estate owned by a family called Hetts (“They shot off to Canada in 1939!” he says).

He volunteered in July 1915, and proceeded to France later in the same year.  Here he saw heavy fighting in many sectors, and was engaged in the battles of Albert and Ypres.  During his service overseas he received injuries in action, which resulted in partial loss of sight, and was invalided to England, and after hospital treatment was discharged as unfit for further service in January 1917.  He holds the 1914-15 Star and the General Service and Victory Medals.”