Oggelsby's - the Blacksmiths at Southdown

I was interested in your article in the Herts Advertiser concerning the centenary of your business, also your request for information of the time previous to 1912. You may not know me personally, but I was born in 1886 and lived first in Cravells Road then in Coleswood Road until 1910, and remained at Southdown end of Harpenden for 80 years, so I remember quite clearly most of the people who lived there during those early years.

I particularly remember the Blacksmiths Shop and Business.The green opposite the shop was the playground for the local children, and I with other boys would meet there almost every night during the winter for games; then when the Blacksmiths began their evening work after tea we would gather at the door to watch and get inside the big doors if possible. There would be your Great Grandfather Charles at No. 1 Forge and the two sons Charles and Fred at the other. Charles Snr. was a tall, big man with a rough manner of speaking to us boys. If too many tried to get inside he would come and swish his leather apron to drive us out, but if only one or two, it would be “Come on, boy and blow the fire”, all hand blown bellows of course. This was indeed a treat and privilege especially if very cold outside. When we tired it would be “blow up boy”. Although he pretended to be rough, we also knew he liked boys and was kind at heart. As I grew older I knew him at the Chapel also. During these evening sessions the Blacksmiths would make shoes ready for horses for the next day, also making, mending, or sharpening all kinds of tools for workers in many trades: workers on farms, buildings, road, well-sinking etc.

In about the 1890s labourers began to obtain second-hand bikes; only the better off could afford new ones, and these old bikes were in constant need of repairs and they began to bring them to the Blacksmiths shop for some of these repairs. These were quite out of bounds for Charles Snr. but your Grandfather Fred took over these jobs, also a young man named Ernest Weston my second cousin was working in the shop at that time and he became interested. This branch of the work grew rather quickly and could no longer be carried out in the Blacksmiths shop, so a top floor was placed over the whole shop making a workshop for cycle repairs and storage, and Ern was put in charge full time. It was reached by a ladder from close to Forge one. I can see everything very clearly. There was a long window across the front and under the window, a long wide workbench. At one end of the bench was a door, which opened out onto a platform and over the door a pulley to haul bikes up and down. In course of time this bench became crammed full with all parts of bikes and tools, and Ern would usually find something to fit any job which came along, in fact some parts had to be made to fit, as many old bikes were made up ones in the first place.

My eldest brother was also an Ernest and he worked as an assistant in a grocers shop, and had a half day off on Wednesday. He was mechanically minded and interested in bikes, and each Wednesday he would spend part or most of the afternoon helping the other Ern in the shop. No money was exchanged but he might take one or two bits to help build a bike out of odds and ends.

When I was 13 years old and started work in the same grocers shop the two Erns built me a bike out of odds and ends. The front wheel was larger than the back and the tyres were solid rubber about 1” wide. The roads were not smooth like the present day. Stones were laid on the road then watered and rolled in by a heavy roller so the finished article was rather rough. This caused a good deal of breakages on cups and cones and spindles etc. but chiefly spokes which were drilled into the spindles. You could manage with two broken spokes but if more the wheel would wobble and finally touch the frame, then we knew it was a job for Ern, and we knew what he would say. “What do you expect me to do with that” but he always had a try. He would say “Here’s a spanner, take out the wheel”. He would fit new spokes and then we watched in wonder while he trued it up, tightening and loosening spokes until he got it true. This helping to do the job was typical of all the jobs done in the Blacksmiths too if you were waiting for it.

This seems very simple stuff now, but it meant a lot to us in those days and also to the working man whose job to a large extent depended on his bike.

Somewhere about this time my brother Ernest got hold of a motorbike (second-hand). This was quite something to own one of these. It needed quite a bit of titivating to keep it going. He began bringing it down to Ern at the shop and your Grandfather Fred also had a go, and I think that it must have been about this time that he took to doing repairs on cars and using one himself. He bought a secondhand Charabene/charabanc and started to take people out for joy rides on Saturday afternoons. It was quite an excitement for us lads to see it being loaded up and start off. If it went up Walkers Road it would go with a bang and a clatter with smoke from the exhaust and we would try to keep up with it. Fred always drove it himself and it was quite an experience and adventure for the passengers as they never quite knew when they would arrive or return. Fred also bought a large saloon car, might have been a secondhand Rolls, I’m not sure, but it held six with the driver. This he used for taking people to the seaside on Saturdays for their holidays. It was usually two couples to go and two to return each week. The favourite places were Eastbourne and Worthing. This went on for some considerable time. Fred now began to give more of his time to motor repairs and the back yard behind the Blacksmiths shop was used as a sort of garage. This was eventually covered in and made into a workshop also garage for cars, and the motor business was established.

You will have gathered from this simple narrative that I should have been seeing these changes from about the years 1892 to about 1908-10. I wonder if you may find anything useful in all this, but it has revived memories for me and given me something to think of and probably pass on.

Another exciting happening in connection with the Blacksmiths shop for us boys was when new iron tyres were fitted to the wheels of farm carts and wagons. There was a round iron base with a hole in the middle to take the axle or hub of the wheel, on the ground in front of the shop, and the great iron tyres would be carried from the fire while red hot, with tongs by two or three men and then harnessed on to the wooden wheels. Another man would stand by with cans of water to cool the iron so as not to burn the wood. This was terribly hard work but we lads loved to watch this operation, but standing well back.

* In giving permission for these photos to be published, Colin Oggelsby writes: “The three photos of my father George as a boy were taken by The Daily Mirror to go with an article showing how everybody was pitching in for the war effort.  The originals were given to my father’s own father Frederick who passed them on to him. 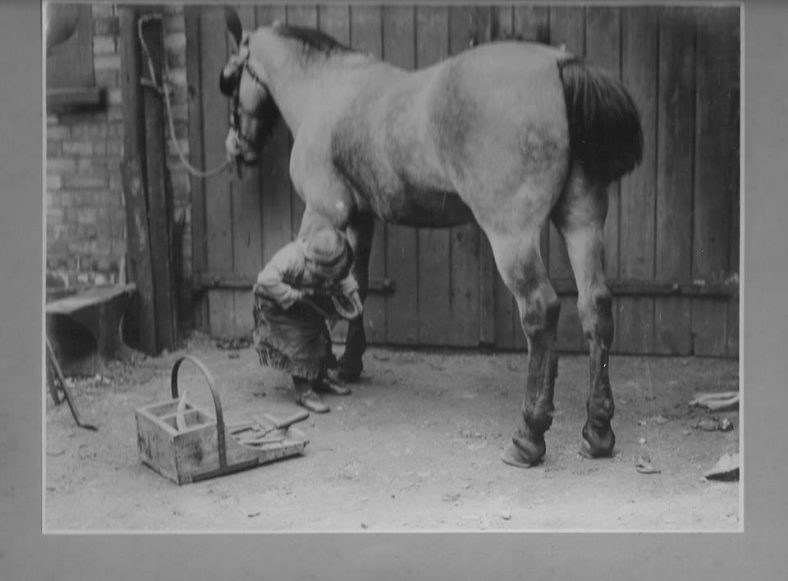 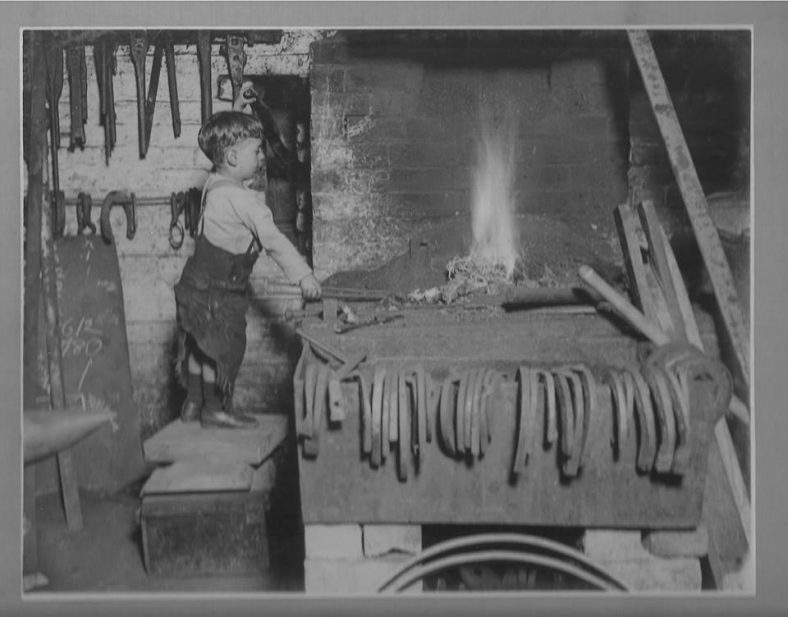 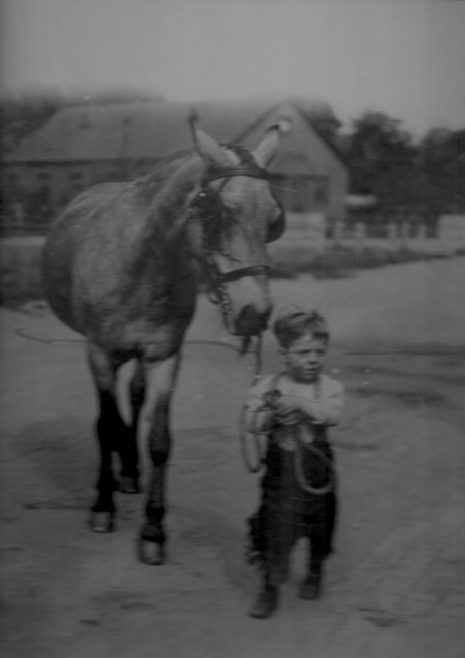