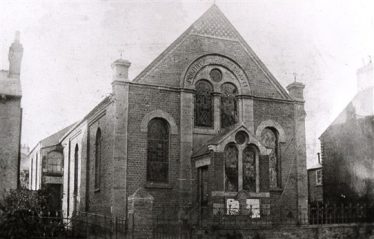 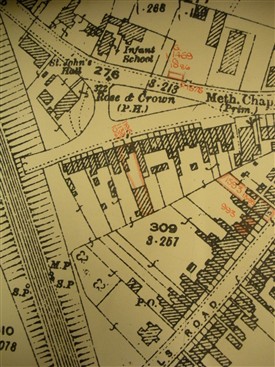 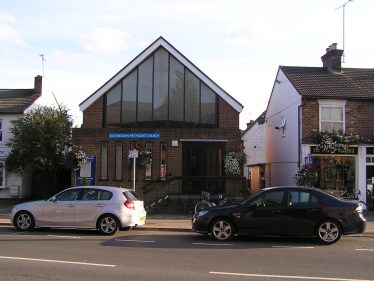 zoom
The chapel in September 2012, with the 1970 "modernisation"
David Noble 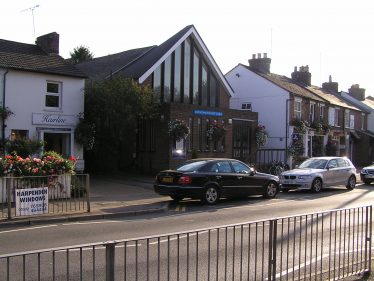 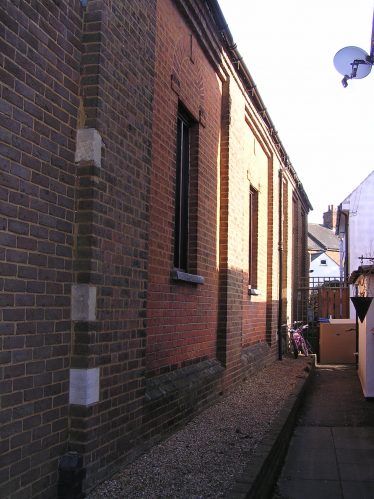 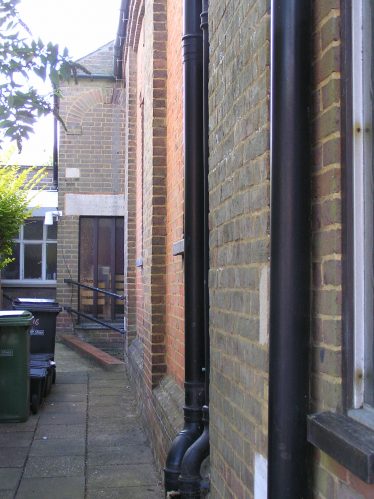 zoom
The access to the 1888 Sunday school extension
David Noble 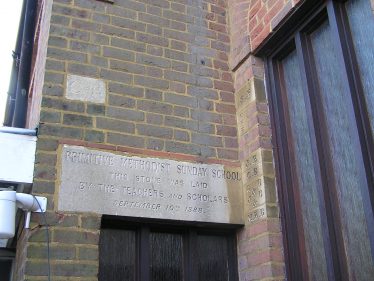 For most of the nineteenth century, a Methodist presence in Hertfordshire was either Wesleyan or Primitive. Primitive Methodism came into being between 1807 and 1812; it was essentially a working class movement, and always remained a nonconformist denomination on a much smaller scale than its Wesleyan counterpart. Wesleyan Methodism had been well-established in the centre of Harpenden since the end of the eighteenth century (on which more information can be found here ), so, when in the 1850s Primitive Methodists from Luton began to mission Harpenden, it was perhaps not surprising that the focus of their missionary efforts should have been the settlement in the Bowling Alley area to the south, now known as Southdown.

As happened in so many places, the work began with open-air preaching, supplemented by prayer and class meetings in people’s houses; gradually these meetings became confined to one cramped cottage in Grove Road, which was used on Sundays as a Mission Hall. However, it was soon clear that a purpose-built chapel was needed to house the growing numbers of people attracted to the cause. In1865 this need was finally met when a chapel was constructed on a small and awkwardly shaped site in Wheathampstead Road (since renamed Southdown Road) that was barely big enough for the purpose. According to Kelly’s Directory, the chapel contained 130 sittings. Valerie Bloye, who wrote A history of Southdown Methodist Church in 2000, gives the following description of the building:

“The original Chapel was a large, square-looking building with no porch, but with double doors facing the street, which was screened from within by a curtain hanging from the gallery. Positioned centrally in the tall gable was a bull’s-eye window, its surrounding stone engraved with the words: ‘Primitive Methodist Chapel erected 1865’. Plain deal wood forms, with back rails, faced the pulpit, which was in the middle of a raised platform where sat the choir. … At the back of the choir stood the harmonium; and a gallery, with four rows of seats, ran the width of the Chapel. Daylight came through plain glass windows, and gas burners, later given incandescent mantles, provided artificial of light.”

Bloye’s history of the church gives a very full account of the growth and development of both the society at Southdown and the chapel. Harpenden had the largest membership of the nine churches in the Luton Park Town Primitive Methodist circuit. Davis says that there were 658 members in the circuit of whom about 100 belonged to the Harpenden society. The chapel was served largely by local preachers from Luton, with ministers visiting perhaps once a month. The Sunday school was also founded in 1865, when the few scholars who attended met for lessons in the chapel pews. However, in 1888, a small room was added to the back of the chapel and separated from it by a partition, which became the meeting-place of the Sunday school. The extension can still be seen today and is marked by an inscribed stone above the external doorway. Above the room space was a balcony, which was called ‘the New Gallery’.

The Primitive Methodist society in Harpenden clearly continued to flourish through the latter part of the nineteenth century, because, in March 1898, plans were submitted to the Connexion’s District Building Committee for a new Sunday school building and for alterations to the interior and the exterior of the chapel. By October 1899, the chapel had been altered (at a cost of £343) and the new Sunday school hall had been built (costing £440) on the opposite side of the road (demolished in 1979 to make way for what was originally a Finefare, now Co-operative, supermarket) on the site of three allotments which had previously been leased to the trustees by the owner of Rothamsted, Charles Bennet Lawes. As before, Bloye provides a description of what the chapel now looked like:

“The exterior had a built-on porch, with doors either side and front-arched windows, and a low front wall capped with ornamental ironwork and wrought-iron gates on either side. The bull’s-eye window was converted into tall, arched windows, as on the porch, with the name of the Chapel engraved in the stone round the main arch. Coloured glass replaced the plain glass in the windows. A notice-board was centrally positioned to give public notices and orders of service. Inside, the Chapel had now gained the twenty feet of the Sunday School room, and tiers of beautiful pitch pine choir stalls ranged round a central pulpit. … There were steps on either side into the choir stalls, and steps on either side of the pulpit for the preacher. The harmonium kept its place at the back of the choir. Pitch pine pews ousted the old deal forms, the choir windows were to have blinds and six chandeliers were ordered to complete the picture.”

Eventually, in October 1925, Bloye explains that the chapel acquired an organ “hand-made by a man at Gorhambury Lodge” at a cost of £90. In typical Primitive Methodist, and, indeed, nonconformist style, the new organ was centrally located behind the pulpit, which meant that further internal alterations were necessary to accommodate it. As Bloye points out, it appears that at the same time as the organ was installed new curtains and communion table coverings were ordered, and electric light and a hot-water system were installed, paid for by a gift of £100 specifically for that purpose This whole arrangement lasted until major alterations to the interior and the exterior of the chapel were carried out in 1970.

At the time, the 1970 scheme was described as “modernisation” of the premises; however, what it succeeded in doing was to alter fundamentally both the interior and the exterior of the building. Internally, all fixtures and fittings were lost and a false roof was installed, the latter altering the proportions of the worship area, removing all trace of the chapel’s original design. Externally, the whole of the 1899 porch and front elevation of the chapel were removed. In their place was erected a single storey box-like front extension with a flat roof, completely at odds with, and totally obscuring, the original chapel behind. The original front gable was replaced with vertical glazing across almost the full width of the elevation, with a pitched roof set at a jaunty angle that does not match that on the rest of the building. Although the original design of the 1865 chapel can still be seen in the side elevations, its public face certainly does not do justice to the building’s heritage as the oldest Primitive Methodist chapel in Hertfordshire that is still in use as a Methodist church.