Transcription of her Will of 1741, with notes 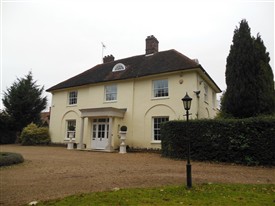 Elizabeth’s father, George, died in 1713 aged 43 (only 2 years after his father). He left his estate to be shared equally between his four children, all of whom were under 21 when he died. His will made them joint tenants, each having an equal and undivided right to the estate and the right of survivorship under which the share of a deceased sibling accrued to the survivors. The sole executor, Stephen Ashby, was also made Trustee of the estate. Execution of the will was overseen by the London Court of Orphans whose detailed records (held in the London Metropolitan Archives) show that George left an estate with a net value of over £6,000.

Thomas, George’s eldest son, lived at Piggotts Hill, as did his sister Elizabeth. He was a Member of Parliament for St Albans from 1731 until his death on 1 February 1742/3. There is no record of him ever marrying so it is reasonable to conclude that Elizabeth took the role of lady of their house, or indeed ‘of the manor’. Thomas did not enter the family trade; instead he went to university and became a gentleman. He made provision in his will for the education of one Thomas, the son of Mrs Mary Gardiner.

Elizabeth made her Will in 1741. She omitted to have her signature and declaration witnessed – hence the need to have persons other than the executors swear on oath that she had actually written the will. She died aged 32 only a few months after her brother Thomas (1696-1743).

Little is known of brother Austin (b.1707) – the last mention of him is in the probate of Elizabeth’s will and I have not traced his will.

I have not found any record of her elder sister Ann (1704-1766) living at Piggotts Hill. In later life Ann lived in the newly-built Savile Row in London and owned a summer house in Isleworth. Also a spinster, she outlived her three siblings and so held all of her father’s legacy. She appears to have been an astute investor; she left a substantial inheritance to the Thomas ‘Gardiner’ mentioned above, who had been ‘legitimised’ and had assumed the Ashby name and married well.

‘IN THE NAME OF GOD AMEN  I Elizabeth Ashby of the parish of Wheatamstead (sic) in the County of Hertford spinster being in good health of body and of sound and disposing mind memory and understanding do make and declare this my last will and testament in manner and form following.  Inprimis I will and order that all my just debts which I shall owe at my death and also my funeral expenses shall be paid and satisfied with all convenient speed after my decease and after the payment thereof give and bequeath as followeth. Item to my cousin George Carter one hundred pounds, to Mrs Ann Jane Robinson Lytton one hundred pounds, all my books, the blue earrings she gave me, the ring she gave me called tip toe, my chest snuff box with the gold hinge and her mothers and sister Warburton’s pictures and my favourite horse called Sancho. Item to my god-daughter Dolly Collins one hundred pounds my brothers Trustee to pay her both interest and principal at the age of nineteen and all my laces and the ring with two hearts Miss Gee left me. Item to Mrs Hariot Crawley ten guineas for mourning and the snuff box with my brother’s picture. Item to Mrs Caroline Wood the snuff box with my picture in it and the picture with the high crowned hatt to Miss Barnard of Harden according to promise, to Mrs Elizabeth Yeames provided she is unmarried at my decease, ten pounds a year to be paid her quarterly during her life and also to the said Mrs Eliz(abeth) Yeames ten pounds for mourning, the padlock ring she gave me and her my three pictures.

To my brother Thomas Ashby the annuity after Mrs Yeames decease all my plate linnen china and household goods which I believe will be more than equivalent for the trifles I leave to my other brother and sisters. To my brother Austin Ashby my gold watch case and chain, likewise he is to have fifty pounds for a ring I received from him many years ago and have since sold it to my sister Sarah Ashby (wife of my brother Austin Ashby) all my earrings of every sort excepting those above mentioned and my brother Austin’s picture which is to my watch. To my sister Ann Ashby all my other diamonds and trinkets of every sort. To my own servants twenty pounds apiece besides proper mourning and to my maid all my wearing apparel except what is particularly good to other people. All my work’d linnen and laced scarfs to my sister Ann Ashby and any other of my cloths if she pleases to wear ‘em. To the poor of Aldermanbury parish ten pounds and the same sum to the poor of the parish I am buried in besides a guinea to every poor family I used to give bread to. I do hereby order and direct that rings to the value of five guineas each be given to the following persons Mrs Katherine Savars(?) Mrs Ann Jane Robinson Lytton Mrs Hariot Crawley Mrs Caroline Wood and Mrs Elizabeth Robarts of Radcliffe, twenty shilling rings to all the persons who support my pall and to such clergymen as my executors think proper after all debts and legacys paid and funeral expenses defrayed, the rest and residue of my fortune to be equally divided among my two brothers and my sister Ann Ashby whom I appoint to be my joint executors of this my last will and testament hereby revoking all other wills by me made. In witness whereof I the said Elizabeth Ashby have set my hand and seal this thirteenth day of September in the year of our Lord 1741. E. Ashby

If it should so please God that I dye before my brother Thomas Ashby I beg he will bury me wherever he intends to lye himself, but if he dies before me then it is my particular desire to my other executors that they will let my coffin be placed as near him as possible and if a vault is sunk for me which I beg it may, let it be large enough to hold Miss Robinson if she desires it’

The twenty seventh of July 1743. APPEARED personally George Carter of Farnham in the County of Surry esquire and Henry Collins of Doctors Commons London gentleman who being severally sworn on the Holy Evangelists deposed as follows that these deponents were well acquainted with Elizabeth Ashby late of the parish of Wheathamstead in the County of Hertford spinster, deceased and with her manner and character of handwriting having received letters from her and these deponents having severally perused the writing hereunto annexed purporting to be the last will and testament of the said deceased beginning thus In the name of God amen I Elizabeth Ashby of the parish of Wheathamstead in the County of Hertford spinster and so forth and ending In witness whereof I the said Elizabeth Ashby have set my hand and seal this thirteenth day of September in the year of our Lord 1741 and thus subscribed Elizabeth Ashby. And also the memorandum beginning and ending as aforesaid to be all of the proper handwriting of the said Elizabeth Ashby deceased.     Geo. Carter    Hen. Collins

This will was proved at London before the W(orshi)pfull Edward Kinaston Doctor of Laws, surrogate of the Right Worshipfull John Bettesworth also Doctor of Laws, Master Keeper or Commissary of the Prerogative Court of Canterbury lawfully constituted on the twenty seventh day of July in the year of our Lord one thousand seven hundred and forty three. By the oath of Ann Ashby spinster the sister of the deceased and one of the surviving executors named in the said will to whom administration was granted of all and singular the goods, chattels and credits of the said deceased being first sworn duly to administer the same (power reserved of making the like grant to Austin Ashby the brother of the deceased and the other surviving executor named in the said will, when he shall apply for the same.

Notes on people mentioned in Elizabeth’s Will

Many references have been omitted for brevity – please contact the writer if you would like further details.