You are here: HomenextHarpenden HistorynextPlacesnextColdharbour and WestfieldnextMemories of Highmoor, Westfield Common in the 1920s and 1930s

Memories of Highmoor, Westfield Common in the 1920s and 1930s

Extracts from 'On growing up in Harpenden before the war - Beginnings' 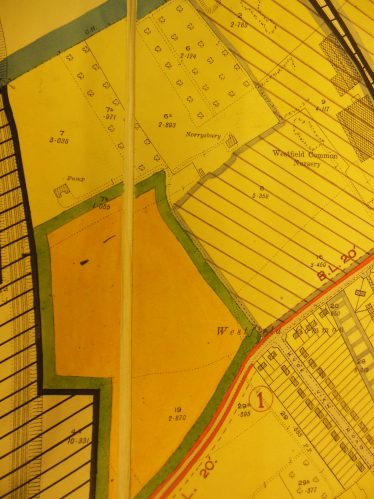 This memoir turned up recently in a file in our archives marked “Memories of Harpenden Before the War” – BF 20.16

I was born on 5 October 1921, in a largish house called ‘Moorlands’ in St James Road [no. 12]. My first memories date from a few years later when my parents moved to a new single-storied house (which my father, a civil servant had designed) built in a corner of a 5-acre field behind what is now the enlarged Westfield cemetery, with the main LMS railway on the western border, and the much older estate of Freddy Moss and family (no greenhouses then, only a rather aged orchard) down the valley to the east [near The Red Cow].

My parents called their new abode Highmoor, which adequately described the rather bleak and pretty empty field that it then was. I think it had been previously used for grazing horses… The ground yielded loads of the most delicious field mushrooms. I remember picking a bucketful at breakfast time, and at least one more bucketful during the day.

There were of course no public services, and my father had employed a company specialising in water extraction to sink a 130ft well near the house, from where water was pumped daily by a rather large single-cylinder horizontal petrol engine which drove the huge pump by means of a belt several inches wide.

In the very early days my mother had enormous help about the house and embryo garden from her own mother, who had been widowed only a short time before she was born [Mrs Gisby?]. Without Grannie’s help I doubt whether Highmoor could ever have been manageable while my father was in London, where he went every day by train.

At that time there was no lighting in the house other than by oil lamps or candles. We did not get mains electricity until just before the war [late 1930s], but anticipated this by generating our own (110 volts, 800 watts DC) using a very cumbersome “automatic” plant, which was installed in the garage.

My next recollection is of “helping” our gardener, who rejoiced in the name of Mr Almond, as he planted young Cox’s Orange Pippin trees in what was to become a large orchard. An upper lawn had already been established at the west side of the house, with a fairly large rectangle of cultivated ground between it and the railway, which at this point ran through a deep cutting. The cultivated ground was mainly devoted to raspberries which grew well in the somewhat poor soil.

My father was a well-known Hertfordshire bee-keeper, having links inter alia with Rothamsted Experimental Station. He kept his hives in the north-eastern corner of ‘the meadow’.

At harvest-time, on the way home from the village we would usually stop a while at the “town end” of Westfield Common, which with several other fields was devoted to hay production. We would watch the horse-drawn hay-carts delivering their loads to the “elevator” used for building hay-ricks. I was always fascinated by the elevator which was powered by two horses constantly turning a central vertical shaft, then driving the elevator through a huge bevel gear and a long horizontal shaft which lay on the ground, slowly but endlessly turning as it transmitted the horse-power to the machine which raised the loads of hay to the top of the rick. There, several labourers using pitchforks received the hay and skilfully spread it out so that the rick rose slowly to the required level, when it was thatched to keep the rain off.

Identifying Highmoor and its development from Kelly’s Directories

By anonymous, but probably by the son of George William Adkin(s), edited by Rosemary Ross