The house was recorded in the mid 1970s by the Buildings Group of the History Publishing Society: Amy Coburn, Daphne Godwin, Eileen Haines, Margaret Jones, Rosemary Ross and John Carpenter, who wrote and updated this report and did the documentary research on on the Neale families. [For more see “Wheathampstead and Harpenden”, volume II, pp 76-78.] 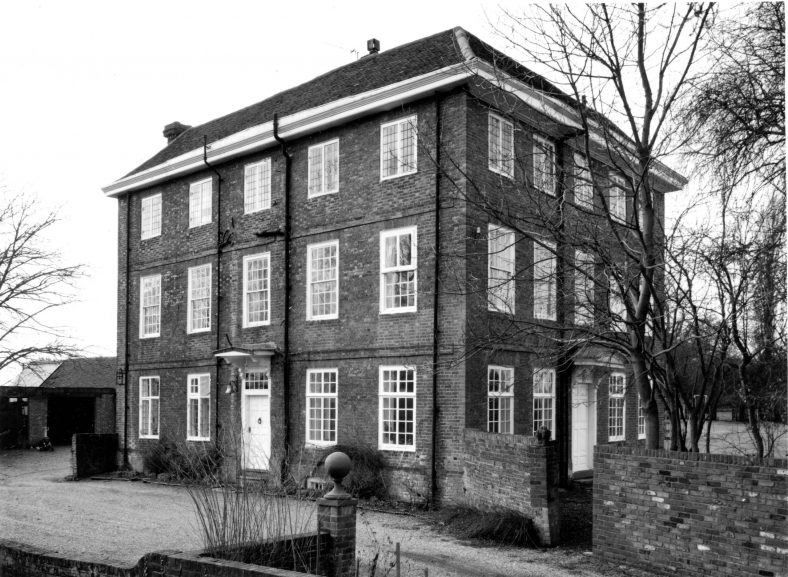 A double pile brick house in Flemish bond, of 5 bays and 3 storeys demarcated by string courses, under hipped roofs of plain tiles, built 1690-1710. It lies by the lane from Hatching Green to Ing’s Wood and Redbournbury; brick piers with stone ball finials announce the entrance on the E façade.

Please note that all the photos illustrating this page are Crown Copyright – Royal Commission for Historical Monuments, taken in 1977. 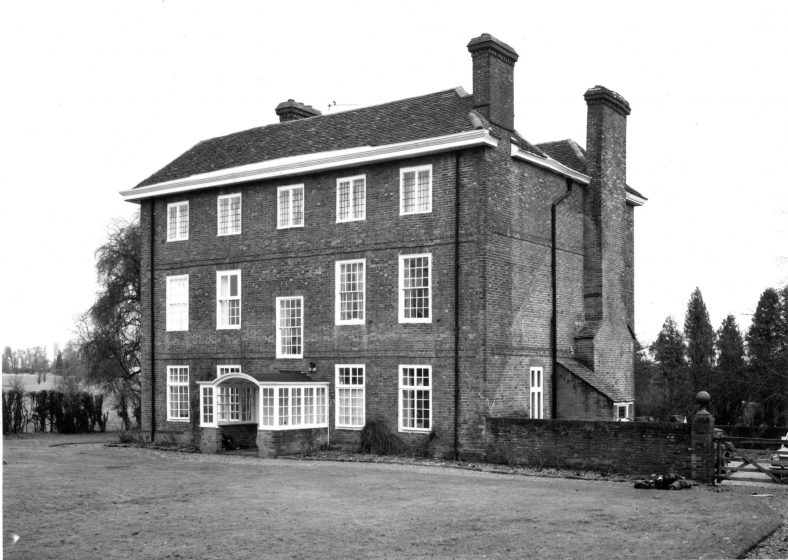 The N elevation is almost identical and the W differs only by a porch (later addition?) and above it the stair window. Fenestration is entirely with small panes apart from replacements: mullion & transom windows on the ground floor, sashes on the first and leaded panes in the attics. The E and N eight-panel doors have a rectangular over-door light under a hood on carved brackets. All ground floor and most first floor rooms are heated: those on the N side by a 4-flue internal chimney, those on the S by external stacks.

The superior rooms of a house at this period are usually placed either side of the entrance but not here: drawing and dining rooms are both on the N side of an E-W staircase hall. 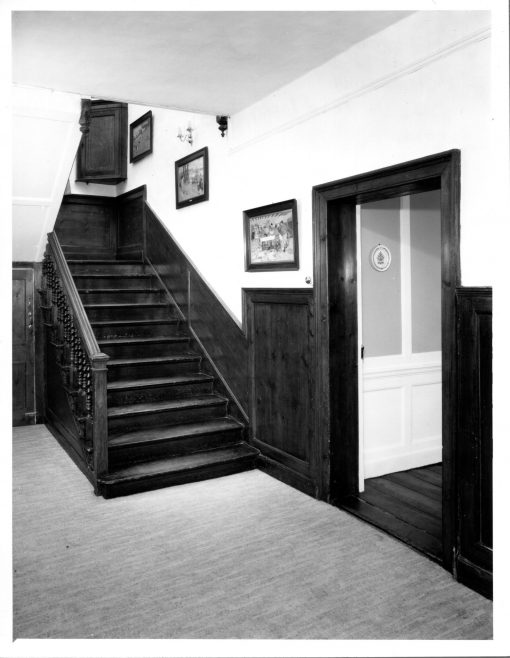 Staircase hall, with door to rear lobby, and access to cellar and back porch. Lower flight of main stair, cupboard door and door leading to the dining room.

The original dog-leg, open-string stair has twisted balusters and flora carving on the tread brackets; c.1700. The hall panelling is later.

The drawing room, truly a `witthdrawung’ room, access being limited to that through the dining room, is distinguished as the best room by bolection moulded panelling. 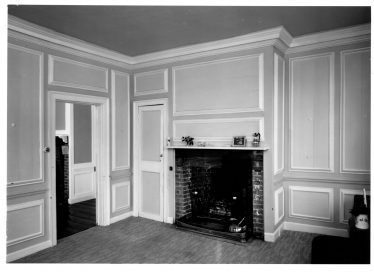 The dining room has plain panelling with shelves next to the chimney breast. The original brick hearth was blocked in the C20. Curiously there is an outside door in the NW corner of the room. 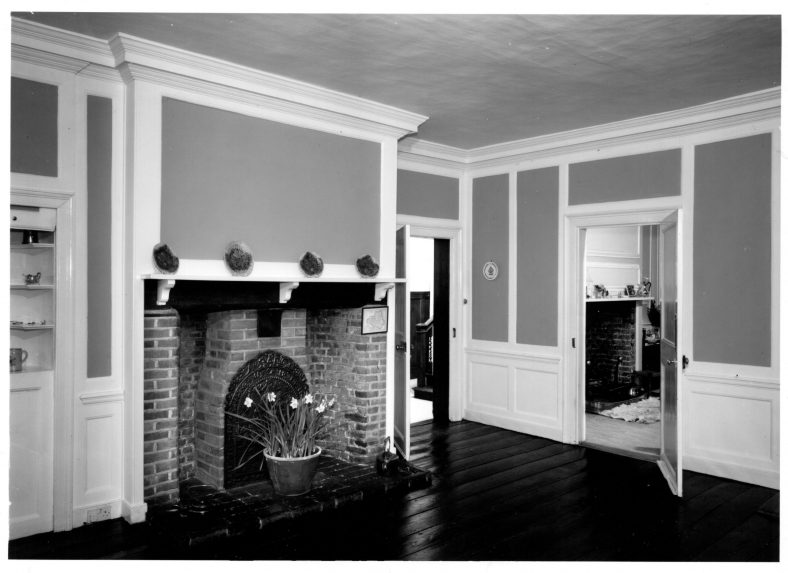 The kitchen occupies the SE corner of the house; a door alongside the hearth leads to the exterior through a lean-to porch. The two E windows are narrower than others on the ground floor; is there a practical reason or do they express the different status of the room? There is a larder and meat hooks in the ceiling. A third door opens into the SW corner room, perhaps a staff sitting room for it has an original corner fireplace although the bolection panels are reproduction. Here also is the back stair, a hidden way to the upper floors.

A wooden semi-circular moulded archway on the first floor leads to the principal bedrooms. 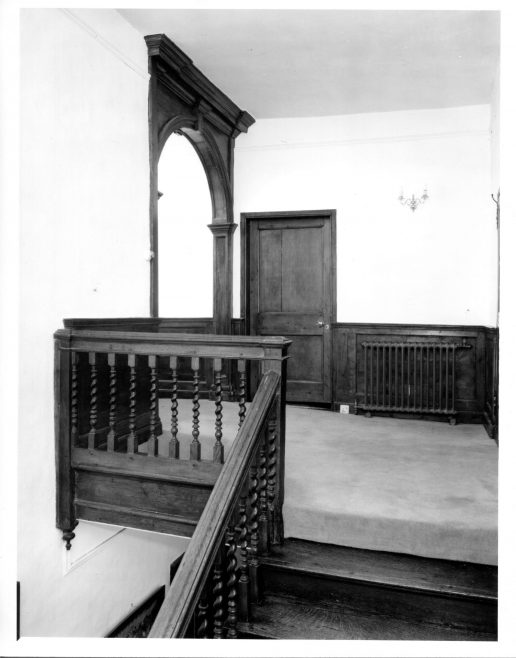 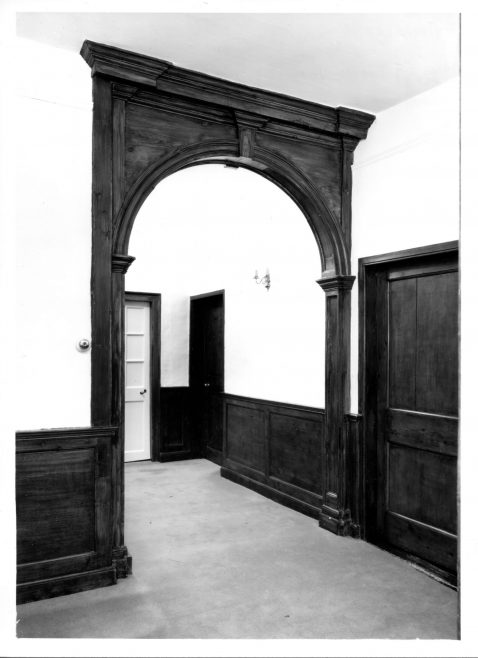 Archway on first floor, leading to the principal bedrooms 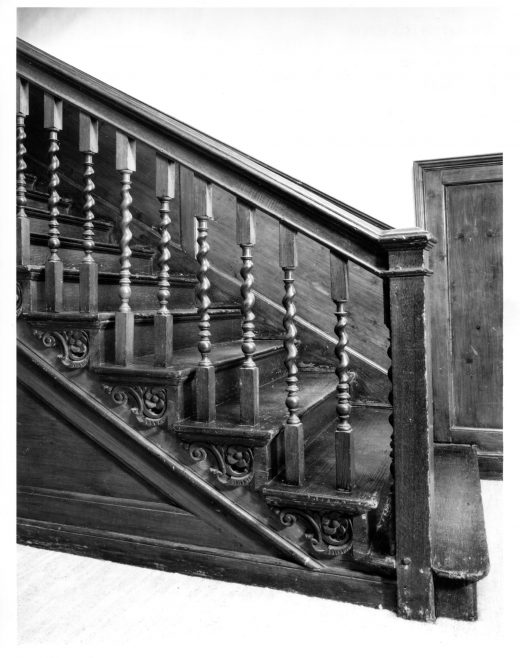 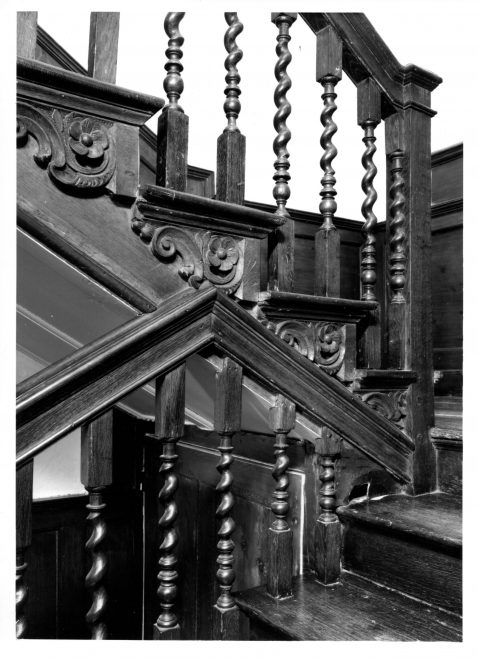 There are more original fireplaces, panelling and window shutters but decoration throughout is restrained as expected in a Puritan home. We have not examined the timbers of the three intersecting roofs but their novel form at this date promises new and interesting construction.

Traces of an earlier building

The unusual room arrangement appears to result from abutting the house against an existing dwelling. Our tutor, Lionel Munby, recalled seeing (in the 1950s?) a timber-framed building on the S side: indeed there is still a gable crease mark and the door by the kitchen hearth would have opened directly into it. Inability to light a stair adequately from the S could have been the reason for the E-W alignment of the hall with the stair at the W end. But this has its own problems because it is the N side of the house that is seen from a distance, the entrance elevation appears only on arriving. The solution, namely to make the N side, rather than the entrance side, the principal elevation has placed an external door opening into the dining room. Never-the-less the intention is clear: whereas the E doorway has only a flat hood, that over the N doorway is segmental; the rubbed brick voussoirs of the window above the N doorway alone are scalloped and with a proud keystone further accentuate the doorway below.

History of the Neale family at Hammondsend from 1293 to 1785

We first read of Hammondsend in the C14 when William Neale left `Hammingsende’ to his second son Nicolas in 1479, but a Nowell or Nele family was at Rothamsted 1293-1355 so was already well established in the area. The first owner we know much about is George Neale who inherited from his father John about 1567. The Neales, with branches at Kinsbourne Green, were the most outstandingly successful yeoman farmers in the neighbourhood. George marked his success by buying property: in 1593 the Bardolphs of Rothamsted, Edmond and the Richards, sold him a tenement in ‘Hatchinge Green’ with 50 acres of copyhold land on which he paid 6s 11d to Westminster; there he set up his son Edmond (i) in 1602. In 1596 George bought some of Annables and, with Nicholas his brother, a messuage and lands in ‘Harpenden, Kenesborne & Wheathamstead’ from the Butlers, Henry esq., John gent. and their wives Alice and Elizabeth. In 1599 George bought the old Manor of Ing’s, including a barn and lands in ‘Harpenden, Wheathampstead and Redborn’, from Francis and Robert & wife Elizabeth Meverall, but dropped the name Ing’s, submerging it in the farm they had built up at Hammondsend. The following year he sold lands to George Carpenter of Falcons End. When George made his will in 1610 nine of his ten children were still alive. He died the following year worth £664 0s 2d; he was the richest Harpenden inhabitant whose inventory we have seen. The inventory suggests that recently he had inserted a floor into his open hall. More building followed, for in 1663 the house was taxed on six hearths. George was probably in his 60s; his widow Joan lived until 1628 and must have been over 76.

Hammondsend passed to Edmond their eldest son but he died in April 1623 aged not above 51, leaving to Elizabeth his `well-beloved wife … the use of one of the chambers within my newe dwelling house… and one bed and furniture fitting for her’. His only surviving son Edmond 2, heir to Hammondsend, also received `landes ten(emen)tes amd hereditamentes within… Harpenden and…Redbourne wch I late purchased (1602) and had of my brother George Neale… to the intent that he… bring up and mayntaine my fyve daughters’ Mary, Elizabeth, Susan, Sara (ii) and Grace. Edmond was 17, his sisters were under 16, he had a widowed mother and grandmother; by the time he was 20 he had married Elizabeth and started his own family. Perhaps it was this experience that fitted him for public service. He seemed to have had Puritan leanings for he gave two sons Old Testament names: Zachariah (usu. Zachary) and Nehemiah. Edmond 2 was churchwarden and constable on several occasions and chief constable of Dacorum Hundred in 1646-9 and 1664. Mr Edmond Neale, Godman Jenkin and Nathan Cotton were assessors in 1650 for a militia rate for Cromwell’s invasion of Ireland and he himself paid £3 3s 9d an amount exceeded only by Ananbles £3 11s 8d and Rothamsted £7 2s 10d. Another army rate shows Neale paid for 246 acres at Hammondsend. He was one of five signatories of a petition to the Commons `that the parish of Harpenden may be completely constituted and made a parish by itself not depending upon the parish of Wheathamstead’.

Because of gaps and errors in the registers and the frequent use of the same Christian names, relationships are not easy to disentangle especially after the Act of Uniformity in 1662. By his will made 10 March 1670 Edmond 2 passed Hammondsend to his son Edmond 3, who was baptised 3 November 1625 and married at Redbourn to Anne Finch 29 June 1661. He mentioned four other children and to his wife Elizabeth left a substantial amount of household goods, much of it in a house at Woodend Redbourn where his son Zachary farmed. Edmond 3, died 1709, could have been the builder of the present house but one of the next generation, perhaps his son George 3, is more likely. George was baptised 10 November 1663, was married to Anne Beynon in 1699 at Redbourn and seems to have died in 1729. About this time the property passed into the hands of a fourth Edmond Neale, a brother or much more likely a cousin to George.

Edmond 4 had married Londoner Rachel Foster at a Society of Friends Meeting House in 1690. Their four children, Mary, Rachel, Zachariah and Sarah, also had Quaker weddings. The three daughters were married at Woodend Meeting House; their family home, it seems, was a licensed Quaker conventicle, for which Edmond was a trustee in 1732. Edmond and Rachel had left Woodend farm for Revel End Redbourn by 1725, when Zachary married Elizabeth Hall at Hemel Hempstead, and they must have been aged about 60 when they took over Hannondsend; indeed it was Zachary who paid the 6 Guineas poor rate in 1735. Edmond 4 died in 1750; his son and heir was then in his 50s. From 1764 Zachary leased the property to Henry Taylor and part of the pasture to John Bennet. Thomas Birchmore had become the tenant by 1782 when the land tax was £19.

A change of dynasty!

In 1785 Zachary and his second wife Rose sold Hammondsend to Frederick Vandermeulrn (VCH names Jodhua Pomfett Vander Meulen) whose descendants held it until the end of the C19. It was sometime rented to tenants.