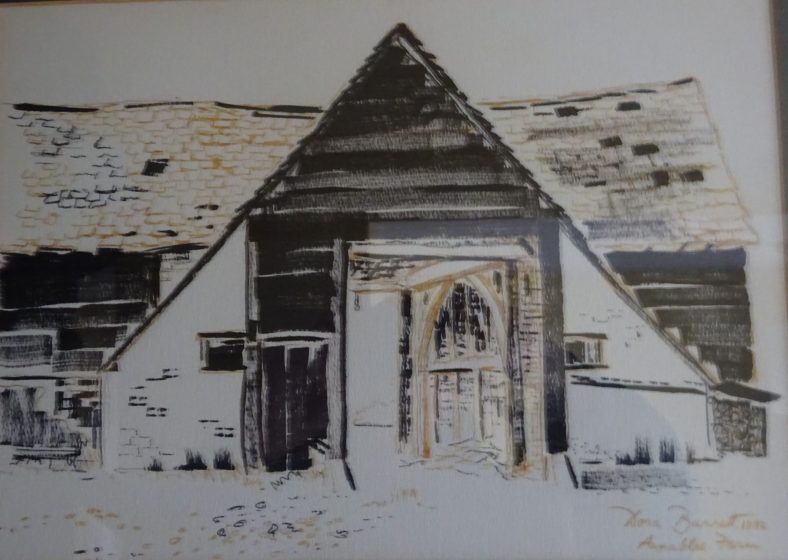 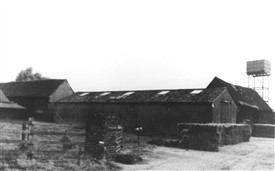 Annables farmyard in 1987 – the stock had gone by then. Credit: LHS archives

Looking at the vast areas that are now controlled by one or two men with modern machinery, it is difficult to remember how many people were employed on each farm prior to 1943.

Annables Farm, where I worked during the war years, was a mixed farm of about 300 acres. A lot of this land was used to provide food for the cattle – some 60 milking cows, and young stock to follow on. To look after the stock and work the farm and dairy at least ten people were employed, with ‘extras’ called in at hay and harvest times. Jack Fay the farmer when I first came to the farm, bottled TT milk on the premises and delivered it to customers in Harpenden in milk floats pulled by ponies.

These ponies – I think six of them – were the pride and joy of a marvellous old character known as ‘Deaffy’. He was stone deaf, and one day had turned up at the farm asking for work. From then, until, because of old age and infirmity, Mr Fay had to get him into an old people’s home, he lived in a barn on the farm, and looked after the ponies. His knowledge of horses was uncanny. Somehow he seemed to know when a pony was off-colour before it was actually ill. He would ask for a shilling or two from Mr Fay, and set off in the pony trap to the chemist in Harpenden. Invariably his remedies were effective but he would never divulge what they were – and invariably he would return in a state of happy intoxication!

Tributes to the many farm workers

Another of the farm characters was George Cootes (nicknamed ‘Tinner’). He, I was told, had gone to the Boer War as a little drummer boy. A man of few words, he had a back as straight as a ram-rod, and wore a flat cap well forward on his head and a handkerchief round his neck. Most of the rick building was done by him and he was proud and jealous of the work he did. His home was in Flamstead and every day we walked across the fields on the footpath that leaves Flamstead at the top of Chequers Hill, crosses the A5 (A1…) and runs diagonally over the Friar’s Wash water meadows and eventually joins the top end of Roundwood Lane. Of course he branched left and came up the farm lane to Annables, always arriving early for work.

It was with ‘Tinner’ I was working, cocking hay in a field called ‘Chimbles’, when we were told that Mr Fay was taking over his father’s farm at Knebworth and leaving to live there. ‘That’s a bad job for us,’ I said. ‘Ah!’ was his reply, ‘it’s like losing your mother and father’, and tears were in his eyes.

Bill Higgins was an altogether more talkative man. Stooping slightly, and with a drooping moustache, he always wore a battered trilby and a shirt with stud but no collar. ‘I never want to eat another rabbit in my life’ he said vehemently, and then explained how he had brought up a family of six on 18s 6d a week wages. Most of the meat they ate was rabbit, snared along the hedgerows or netted when ferrets were put down the burrows.

The foreman was a rather distinguished looked man, tall and lean and with clean-cut face. He had farmed in Canada as a young man but returned to England to marry a round little wife. His name was Albert Quadling. 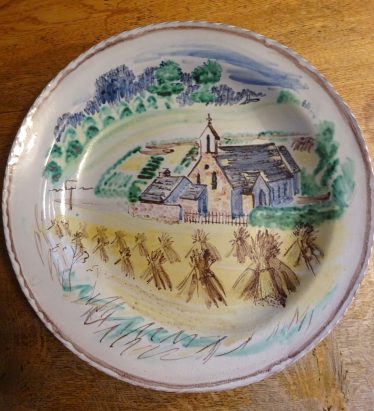 Johnny Mac (MacMillan) was a tough little 5’2” Scot who came from the Glasgow area. He was a terrific worker and in spite of his small size would tackle anything, and of great use on the farm. He had a natural aptitude for keeping machinery working and for mending it when it broke. It was he who taught me to load a cart in the Scottish way – crossing the sheaves at right angles on the ‘ladders’ of the cart so that they did not fall through, and I became good at making the load balance nicely so that there was not too much weight on the horse’s back, neither was it lifted off its feet by a tail-heavy load. Johnny was of rather quick temper but with all the courtesy and kindness of so many of the Scots.

Mr Bandy was night-watchman in Luton, but used to put in some hours helping out during hay-time and harvest. Formerly he had worked in the brick-field which used to be at the corner of Watery Lane (Brickfield Cottages). He was a very gentle and courteous man.

I must not forget ‘Timmy’ – George Timberlake – unable to read or write and slow of speech, but a marvellous worker, as honest as they come, as strong as an ox, and one who would work until he dropped.

Arrival of ‘new-fangled’ – and traditional – machinery

But things were changing rapidly. We had a hay-sweep, but then came a baler, static at first but later towed by a tractor. We even had a strange machine on which we sat feeding cabbage and narrow-stemmed kale plants into a conveyor belt, which, hopefully, planted them more quickly than we could by hand!

That new-fangled thing the electric fence was installed and Deaffy, disbelieving its effectiveness at a distance from the battery, walked to the end of the field and grasped the wire. His remarks were unprintable! 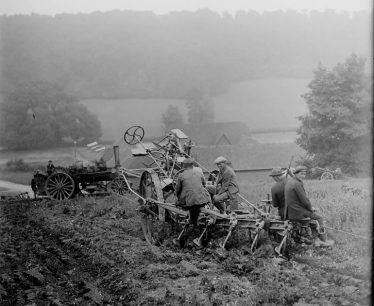 The main part of Kinsbourne Green Common had to be ploughed up to help the War Effort. They had tried grazing sheep on it for a time but this was not practical, with roads all round and dogs about, so, after getting his old ‘International’ tractor bogged down two of three times, Jack Fay hired Olivers’ steam tackle from Wandon End. In fact it was the last time that I saw a steam plough in action. They had two of the really big traction engines, each fitted with a horizontal wheel, or cable drum, with cable on it, under the boilers. One engine stayed at the top of the Common and the other took up its position opposite, at the bottom end. 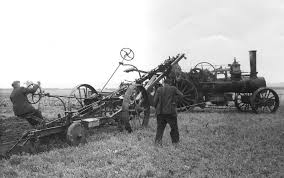 The cable ran between them and along it was towed the six-furrowed plough. When it reached the end of its ‘run’ the plough was tipped up. There was a blast on the whistle, the engines moved forward the width of six furrows and the plough was towed back to the first engine. In that way you could plough really rough, hummocky ground and also get rid of the hawthorn bushes and scrub.

One fair-sized oak tree was left standing, ‘because,’ said Albert, ‘it will be nice to sit under it and eat our sandwiches at harvest time. Unfortunately its shape has been somewhat spoilt. All the lower branches were hacked off and burned by the Gypsies during the snow and great freeze of 1963, when ten caravans were stuck on the Common for about two months.