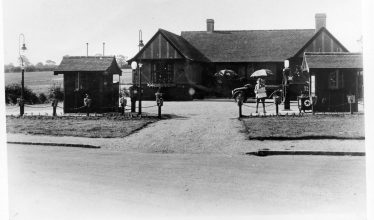 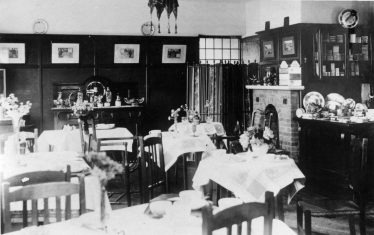 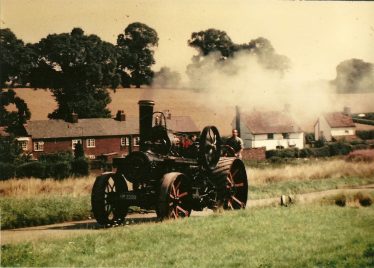 zoom
A traction engine on Kinsbourne Green Common in the late 1960s when there were regular rallys - see Comment below
LHS archives, cat. no, LHS 010,265

Transcript of an anonymous article in our archives, with additional information.

Green Lawns was built for Mr Arthur Beckett in 1920 by his brother and Mr Jesse Catton, who were in partnership developing property at that time.  Arthur Beckett and his wife had lived in America but returned to England at the coming of the First World War by the last liner to get safely through. They had initially lived in London but Norman, their son, had sustained injuries on the rugby field which left him with asthma so it was felt that the fresh air of Kinsbourne Green would be beneficial. At that time Kinsbourne Green was extremely rural. It is understood that the Deeds to Green Lawns ‘contain Russian names (so presumably the land on which it stood was once owned by Luton Hoo’ – Ed).

Green Lawns was a petrol station and restaurant – with tennis courts and a putting green – a country club. In the 1930s directors of the great London stores such as Harrods and Whiteleys; bishops; famous stage names all came to Green Lawns for lunch and tea playing putting and tennis. The Hertfordshire Hunt dinner took place there and the hounds and hunt were frequently seen on the Green. During the week they had a regular clientele of commercial travellers: steak and kidney pie was a favourite.

All the cooking was done by Arthur Beckett’s wife, aided by Joan, Norman’s wife. Everything was cooked on a large black range as there was no gas or electricity and the house was lit by oil lamps. Ready-cooked hams were supplied by Mr Harris and they were one of Mr Ackroyd’s first customers. Everything was delivered by horse and cart – including the milk which came from Faye’s Dairies at Pollards Farm in churns, the milkman earning 6d a week at that time.

When, in the 1930s, the family visited London, they travelled to Luton to catch the train on the Straw Hatter Coaches. These stopped anywhere to pick you up and delivered you safely to your door, charging you 2/6d return, including the travelling rug.

In the late 1930s a pilgrimage from Dover arrived barefoot, in habits, seeking refreshment and set up an altar in the garden.

Norman Beckett took over the running of the garage in 1940. He drove a lorry in the north during the Second World War and his wife Joan had charge of Green Lawns. The Army was billeted there, bringing with them a machine gun. They gouged a large hole in the holly hedge which separated Green Lawns from the common in order to get the gun into the garden.

Petrol was, of course, scarce at this time but until then Green Lawns had been a very busy place being the last petrol station between Harpenden and Luton. The family were often woken at night by drivers wanting a can of petrol.

In the 1950s Mr and Mrs Reese ran Green Lawns. It was still a country club then and a tennis club regularly used to come from Luton to play their matches on the two, or possibly three, tennis courts – there being few tennis courts available in the area at the time. There was no putting green then.

After that Mr Chesham leased Green Lawns to Mr Prattley in 1960; to Malcolm New in 1977; and to Bowers Motors in 1981. For more informationa on the later developments see Geoff Woodward’s page on Kinsbourne Green and comments added below.