Kinsbourne Green Common in the 1930s 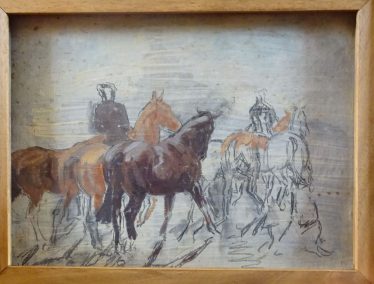 Dora Barrett – Sketch of horses, reflecting her love of riding

Dora Barrett lived at Highlands, Kinsbourne Green. Her father was a businessman in Luton and Dora lived in a flat in the house, caring for her parents until their deaths. 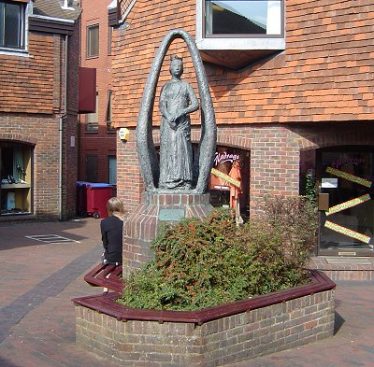 Eleanor Cross, Dunstable, sculpted by Dora Barrett. This replaced one which had been destroyed in the Civil War

She had attended Luton High School for Girls, and was a keen horsewoman and successful artist and sculptor. She remained single and lived on The Common until moving into a care home, where she died around 2000.

One of her important commissions was for the Dunstable Eleanor Cross to replace the original cross destroyed in the Civil War. This was commissioned by the Dunstable building firm of Robinson and White, which created the shopping precinct where the statue stands.

She wrote a number of articles for the Local History Society Newsletter. This edited article was first published in Newsletter 45, February 1988. See also her experiences as a Landgirl in WWII.

This was a real common then – in the nineteen thirties. It had bracken and hawthorn trees and even, at the lower end, a small patch of heather, and harebells grew through the soft pinkish heath grasses. It was a wonderful experience to stroll over this soft, mauve and pink counterpane on a still summer evening, and breathe the sweetness which had been drawn from the flowers and grasses during the day. Clouds of ghost moths would rise with every step one took. Then, from up the lane, a little screech owl would start to call. We often saw him bobbing up and down on a gatepost or telegraph pole. I would imitate him and he would answer back.

The next old house was called ‘Kinisbourne’ (now Kinsbourne House -tbc). In 1936 it was lived in by Mr and Mrs Percy Currant and their family of three boys and three girls. The house was long, low and painted white, with stables and out-buildings and with a really beautiful garden. The grass verge here is very wide and the Currant boys kept it mown so that they and the village boys could play cricket on it.

It seems to me a pity that it has become fashionable for most people who live on the edge of the Green to cut the verge in front of their houses and turn it into a lawn. Not only does it make the houses obtrusive, it also keeps the wild flowers of the Common cut out of existence. This wide verge, running from ‘The Harrow’ (redeveloped as a row of houses in 2017-19) to Dove House Farm, is now the only piece of original heath turf remaining – the rest having been ploughed up during WWII – and left to its own resources, would soon revert to the wealth of beautiful grasses and flowers which grew when it was mown for hay just once a year. 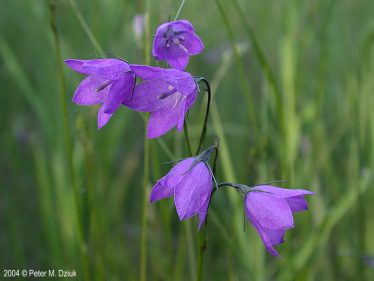 Some flowers I remember, with their descriptive country names, are mouse ear chickweed, greater and lesser stichwort and, earliest of all, the coltsfoot. Following on would be campion, toadflax, ladies’ bedstraw, fumitory, shepherd’s purse, ox-eyed daisy, rayless mayweed, knapweed and, what a lovely name, rest harrow. There were patches of heavenly blue harebells and, shining brightly, St John’s wort grew down by the little church of St Mary.

As the year advanced drifts of willow herb would blaze forth, and the soft blush of young sorrel appear over the Green before turning to pink and rust. The perimeter of the Common was lined with hogweed and thistles.

In autumn the thistle seeds attracted various birds but in particular the goldfinches. It was – and still is, I’m glad to say – a truly marvellous sight to see a charm of these small, beautiful birds rise from the seed heads and wheel round so that the sun catches the brilliance of the fold in their wings. Linnets also are much in evidence at this time of year.

Sadly the yaffle or green woodpecker, once a frequent visitor to the trees and lawns in our garden, is now seldom seen and great spotted and lesser spotted woodpeckers are but occasional passing visitors.

The barn owl which used to float over our paddock has been missing for many years but happily tawny owls still frequent the garden. This summer the night breeze has carried the rusty squeak of young owls and I have found many pellets under the horse chestnut on our back lawn.

Spring time usually brings a pair of partridges into our garden looking for seeds. Originally these would have been common partridge, but in more recent years they have always been the French or red-legged variety. This year (c.1988) none have come.