Notes on Kinsbourne Green between the Wars by George Walsh

My formative years before a lifetime in Africa 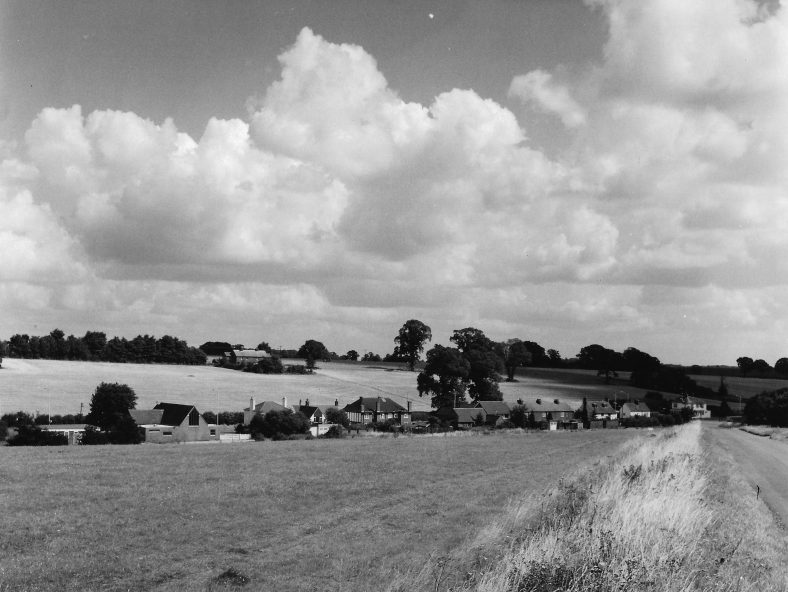 Notes added on the script are:  born Kinsbourne Green on 14th November 1917; left ‘for the wars’ September 1940 and, in another hand, ‘I believe he was the nephew of  Lovegrove, Free Press editor and his mother was nee Batty of Milton Road)’ (ed. but see below)

Further information gained from ‘Ancestry’, Kelly’s Directories and Electoral Registers: George’s father was Edward Kendrick Francis Walsh born in 1882 in Over, Cheshire, and his mother, née Irene Francis Baty, was born c 1878 in Cloughton Cheshire. Their marriage was registered in the Wirral in the first quarter of 1913 and it would seem they started married life in ‘Kirkeaton’ in Longcroft Avenue, Harpenden.  By 1918 they had moved to ‘The Cottage’ Kinsbourne Green and were still there in 1943 when Edward died on 28th April in the Luton and Dunstable Hospital. Irene died in April 1961 in Northern Rhodesia.

George himself married Beatrice Dora Evelyn Osborn (born Edmonton, November 1908) at Edmonton in 1945 having served as a 2nd Lieutenant in the Royal Artillery during the war. He was a civil servant in Northern Rhodesia in 1959. Beatrice, and probably George, died in Cape Town in the 1990s.  If anyone can correct this information or fill in the gaps please do so by adding a comment to this page or via ‘contact us’.

Until the late twenties Kinsbourne Green was a small hamlet, and it could hardly support the primary school operated in St Mary’s Church, with about 30 pupils. I was an unwilling scholar having been forced by the Inspector to leave home and start schooling at 7 years of age. The two Hollywood spinsters who lived in the house behind “the Fox” ran the school. They retired to Tring.

The school closed when I was about 10 and by that time two small buses plied between Luton and St Albans. One was the ‘Express’, I forget the name of the other. It was not long before the green London buses came on the scene with a 20 minute service (4d to Luton), and numbered 324 (?). 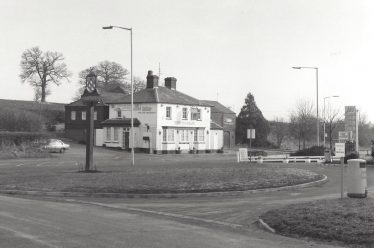 The absence of a bus service meant that when I was very young all shopping had to be done by walking the 2½ miles to Harpenden. Mr Harris ran a very small village shop next to his own house diagonally across from the ‘Harrow’ (later a Beefeater! ed now demolished and replaced by a row of 8 semi-detached houses) – ½d for 2 pickled onions – and it was only in about 1929 that the Bennetts built the shop next to the Chapel with a better selection of goods. Later the Co-op van came weekly and supplied food and general merchandise, travelling from house to house. The Bennett’s daughter, Myrtle taught me to play the piano.

Villagers’ names included Smith, Clark, Fensome, Harris, Howard and Bates. Harris, the road sweeper, lived in the first of the small cottages on the main road while Smith, another road sweeper, lived in the middle cottage. Clark with his many children lived next door and I was surprised to see his son Albert answer the door to me a few weeks ago. He was nearly killed when run over by a car in the mid twenties. He passed me on to the fifth cottage where his two sisters Alice and Edith live, one being 84.  The cottages have been well maintained and improved, and the sisters were so smartly dressed. They reminded me of  the times my mother used to hand them out a penny from time to time! Their father was a labourer for Jesse Catton the builder.

My village playmates were Cyril Clark and Ronnie Smith, doing the usual seasonal things – hoops, yo yos, cricket, flipping cigarette cards, the victor taking the pool (I was a bad flipper and always lost). Each Guy Fawkes time we built a giant bonfire with bracken from the common and all the waste wood outside our garden and the ‘Cottage’, on the common. By that time I had started going to the Council School (Victoria Road Schools) under Mr Watts in Harpenden, later to go to the Luton Modern School which, being in another county cost my father £20 a year, although I could have gone to St. Albans Grammar without payment. Saunderson our headmaster lived in Harpenden and often gave me a lift to school.

For a time I was in the church choir at St Mary’s but later defected to the Methodist Chapel being taught at Sunday School by Connie Howard from the ‘Old Bell’ area. I met her again as a nurse in Northern Rhodesia, accompanying the Government Medical Officer whom I had called to investigate a case of suspected murder of an African by a white farmer!

We got little for our rates (£11 a quarter for the ‘Cottage’, same as the rent!) as gas, electricity and water were only laid on in the early thirties.  There was no indoor sanitation either. We had an excellent well lined with flint-stone and 60ft in depth.

I imagine there had been no building from Victorian times until the mid twenties when the ‘Close’ and the ‘Pleasance’ went up.  On the common in close succession houses were built on either side of the ‘Cottage’, one in the orchard above, occupied for a time by Bartlett, Manager of Vauxhall Motors.  (If we ever wanted spare nuts and bolts there were plenty on the A6 dropped from new cars going to London!). This was followed by the house below the one occupied  by the Cunninghams. It was built for Mr Miles, owner of a rubber  company – now Avon Rubber I believe. He once gave us some rubber grips for the bats we were using playing cricket on the common in front of his house. There was a public footpath between his house and the Cunninghams. The farmer behind (another Catton? ed Frederick) tried to close it but the villagers always prevented this happening although few used it. There was a second path below the Cottage  leading past the top of the Close to Roundwood. About this time the house ‘The Turning’ was built below the Cottage as well as ‘Green Lawns’ on the main road.  I often played tennis there with my friends from Luton. It was also a garage and tea room. 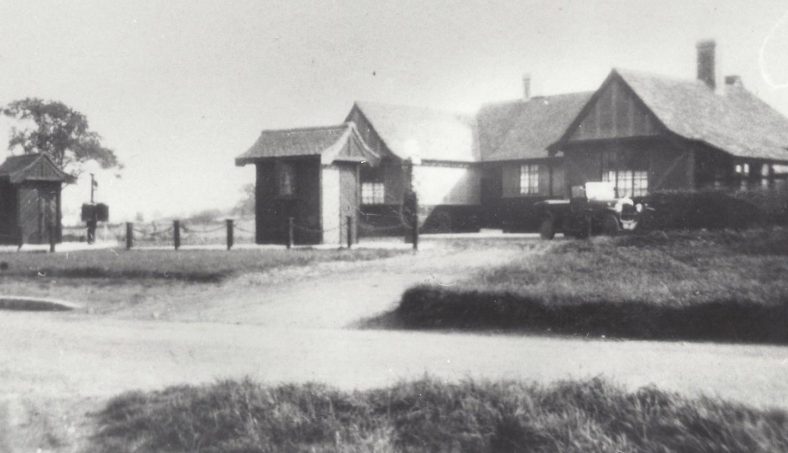 The turf of the common was largely made up of tight and short downland grass, the present growth seems to be the result of cultivation during the Second World War.  Skylarks abounded and the top half was mainly of bracken and heather.

The North Herts Hunt was a great feature with the huntsmen exercising the whole hunt almost daily on the common. Foxes were scarce and had to be bred at the Kennels to be later released as needed. It was one man’s job to look after them. So much for the “We are the controllers of vermin” story. It was a popular sport following the hunt on foot in the winter and attending their meets.

The farms on the Bedfordshire side were owned by Luton Hoo Estate – Lady Ludlow. They had a steam plough, a multibladed plough being hauled to and fro by two traction engines. The Estate also had a coal fired fire engine which caused more fires than it put out as it dropped live embers across cornfields! 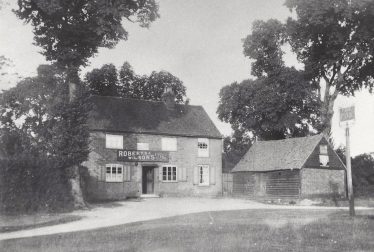 The two counties had differing closing times and a daily rush occurred between the Harrow (Beds) and the Fox (Herts) between 10 and 10.30 pm. Most steady drinking took place at the Harrow – all the men folk went there most nights. Outsiders too – Sir Laurence Olivier often visited with his wife as did Gypsy Petulengro the broadcaster, who lived in a caravan at the top of the common: almost as great character was Prince Honalulu – “I got anorse” who came to the races at Friar’s Wash every year. Several hunts held their meeting there. If the favourites won too frequently the bookies would up sticks and scamper off.

Lilly was the village policeman who lumbered along on his cycle from time to time and dropped in at the Harrow for a chat and a noggin each time.

There was a good postal service, provided our geese didn’t frighten the postman away.  Even at the beginning of the war a letter posted by father in Cardiff at 6pm would reach us in the morning without fail.

Little of note happened in the village. A Schweppes’ truck turned over on the A6 in the twenties and the drink froze, so cold were the winters then. I often had to slide to school over the icy roads and suffered terribly from chilblains and it was not uncommon to be snowed up for a time; there was a gliding fatality near the kennels when the pilot was taking off being towed by a car – I believe this was the first such fatality; the whole village turned out to wave to King George V and Queen Mary who were driving to Luton on some official occasion; in my scrapbook I have a photo I took of a Morris or Austin which had crashed into a signpost near the Harrow as well as a letter I wrote as a schoolboy complaining about the ‘Harpenden’ sign instead of ‘Kinsbourne Green’ by the Harrow.

Currant of Currant and Creek, the Luton hatters, lived in the ‘Cunningham’ House and the Earl of Essex lived there for a time. One of his peacocks escaped into our garden and he came to catch it.

On a botanical note (ed see also Dora Barrett) – ground elder did not exist in the village in my day; we used to enjoy eating the pignuts dug up on the common, and in the years when yarrow was plentiful, Heath and Heather, the St Albans herbalists used to collect it by the lorry load. 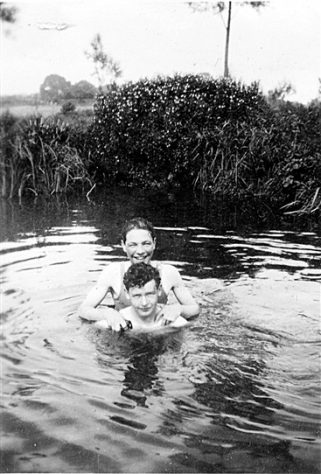 The Munt brothers swimming in the River Lea

As well as scrumping – eating other people’s apples although we had a surplus ourselves – we were not beyond having a nibble at the odd mangel wurzel grown as animal food on the farm on the way to Roundwood. We learnt to swim in the Lea at Batford and where incidentally there were many fresh water crayfish. One of the London restaurants sent a man down to catch them using pieces of kipper as bait. 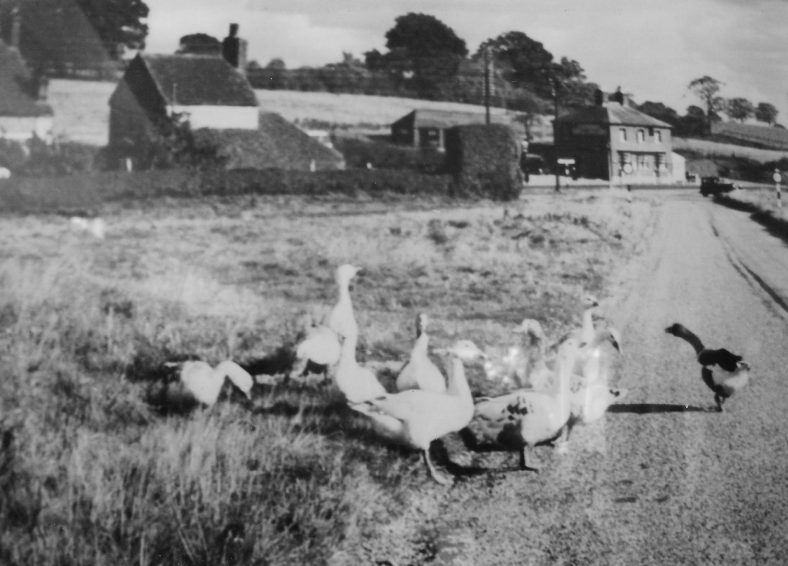 The enlarged photo of our geese on the common was taken by me using a 7/6d Brownie box camera with yellow filter to bring out the clouds. It was one of several I took at 10.30am or half an hour before the declaration of war on that fateful Sunday in September. The dark gander on the right was called ‘Gandhi’ and had already been injured and made lame by a car. The road they are on had recently been tarred and improved, although for some reason the latest Ordinance Maps show it a an insignificant road with dotted lines.  Mind you they also show the ‘Beefeater’ as a post office (‘P’ instead of ‘PH’)!