A debate on Harpenden's 'Dry Valley'

Bruce Campbell has started a debate about lost watercourses through Harpenden. Below, Les Casey and John Wassell comment on this proposition.  Others are welcome to join the debate. 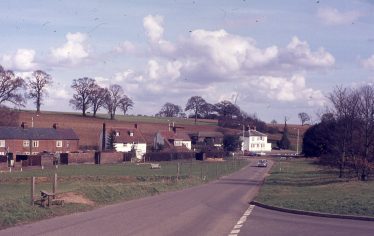 Kinsbourne Green – The Common slopes gently down to the A1081

Harpenden residents will be familiar with the name Kinsbourne and the associated area lying to the north of our town. ‘Bourne’ is an old English word for a river in the chalk lands which flowed in winter time but dried out during summer months. The word Kinsbourne suggests therefore the existence somewhere of a river Kin. It does not appear on any Ordnance Survey map but its course or what remains of it can be traced quite readily from its source to its junction with the Colne river and thence eventually to the Thames. The depth and the width of the remnants of the course suggest a river with a very substantial flow at least during periods of peak rainfall. We can only surmise when the Kin was an active healthy river. What we do know is that in the Kinsbourne Green area the water table was very much higher historically than it is today. This level of water table in turn gave rise to a very active spring line which in turn gave rise to the head waters of the river Kin. There are several names whose provenance suggests that this is so. An access road at Annables is named Spring Road and there exist two large copses – one is named Long Spring and the other Kinsbourne Spring. The reason they are wooded is that they were considered by the land owners as being too wet to plough. They are situated to the south and east and close to the property of White Walls.

The Kin then sprang to life in this area and followed a course north east for a distance of about half a kilometre until it met what is now the roadway of the A1081. At this junction it turned abruptly south east towards Harpenden. A well defined remnant of the course can be seen on the west side of the A1081 close to the access to the Thrales End Lane. Here a tree line obscures a dry river course some two metres deep and four metres wide and some one hundred metres long. The course followed through Harpenden feeding the ponds at Southdown and thence through Southdown itself to Cross Farm, West End Farm and Nomansland. Parts of the course are clearly defined running parallel to the road until it reaches the present B651. It crosses this and deviates to the east and south until it reaches the village of Sandridge and thence to the gravel pits near the Beech Farm and onto the river Colne.

There seems little doubt that at one time it was a very substantial river indeed. Why does it not flow today? The reason of course is the need for water from an ever burgeoning population and the ever increasing demands on the aquifers for its supply with the consequent lowering of the water table and the demise of the spring lines at Kinsbourne Green.

Les Casey, the Society’s curator and former teacher of geography and geology, replies:

In the later stages of the Ice Age the front face of the great ice-sheet which covered most of ‘Britain’ was piled up against the northern scarp face of the chalk range which would form the Chiltern Hills. At the foot or ‘sole’ of the ice-sheet fragments of the many rocks over which the ice had passed were embedded as sands, silts and gravels in the base of the ice.

The Ice-sheet on the NNW face of the Chiltern Hills

As the climate changed and the ice-sheet began to thaw, melt-water percolated through crevasses down to the sole, washing out those embedded materials. Accumulated melt-water found a dip in the crest of the chalk scarp and spilled over to flow down the dip-slope to form a valley the floor of which became covered with deposits of the glacial gravels. See the geological map below.

In the ‘Pluvial Period’ which followed, heavier rainfalls produced streams flowing over the dip-slope of the chalk, perhaps where remaining perma-frost first prevented percolation of water into the chalk. Then when the permafrost had melted, rain did percolate into the permeable chalk until saturation raised the ‘water-table’ and surface streams continued to flow creating the new valleys – headwaters of the Ver, Gade etc and valley which now passes through Harpenden.

Formation of the Lea Valley

In the glacial overflow channel, normal river erosion deepened the valley, cutting down through the glacial gravel deposits, reducing them to marginal terraces on the spurs between the new tributory valleys of what is now the Upper Lea Valley.

As the climate became gradually drier, the level of saturation (water-table) became reduced and the dip-slope valleys became ‘dry valleys’ with only intermittent streams during rainstorms. The Lea Valley, having been cut deeper, still reaches the water-table and the river still flows (though now supplemented by the discharge of treated water from Luton water-treatment works).

White Walls at Kinsbourne Green is perched on the 500 foot watershed between the Ver Valley and the Harpenden dry valley. The ridge is covered by ‘drift’ deposits of ‘clay-with-flints’ as shown in the geological survey map. These may account for the wet patches which may appear around Kinsbourne Green, but the contours on the 1/25,000 OS map give little indication of tributory channels down to the Harpenden valley except for one near the county boundary just below Gibraltar Farm on the A1081.

The ditch which lies parallel with the A1081 near the Ridgewood Drive corner ditch appears to be a line of old gravel workings, composed of valley gravel, not ‘glacial’ gravel.

The Harpenden dry valley (the Anglo-Saxon Herpedene) does extend through ‘the village’, where cottages could draw water from their wells, and on through Southdown, Nomansland, Oaklands and Smallford to join the River Colne.

There is no reasonably accurate old map showing a river along the valley. Dury & Andrews map of 1766 is the first that shows demonstrably accurate mapping of physical features down to ponds and individual buildings and it shows no river or stream in the Kinsbourne Green area.

Kinsbourne is the relatively modern version of the name. The question is whether the second part means ‘bourne’.

The oldest record dates from 1201 and is ‘kenesberne’. The writers of the Society’s booklets on Harpenden’s history considered this to mean the burial place of Cyne (no K in Anglo-Saxon/old English, so pronounced ‘Kyne’ and usually spelt with a ‘k’ as in the latin usage, eg Claudius, Cato). The phonetic renderings/misrenderings of local names are a constant source of confusion to researchers. I have found the following variants from various sources:

I could not find a word like ‘bourn’ or ‘bearn’ etc meaning burial in an Anglo-Saxon Dictionary. Personally I think the origin may be from ‘cyne’ and ‘berearn’ – both found in the dictionary I used. Cyne (Kyne) being here a prefix meaning ‘king’ or ‘kingly’ and berearn = barn/barns, so meaning Cyne’s Barn or the King’s Barn. As the original name is at least 1,100 years old no doubt others may have different opinions!

This is the name given to the boundary of Wheathampstead in a charter of 1060 in the vicinity of Kinsbourne Green. It refers to that part of the valley from just south of Gibraltar Farm to Thrales End Lane where the parish and county boundaries ran (and still run) along the road from St Albans to Luton. It is apparently a corruption of the Anglo Saxon words for a military road running through a dene or valley. ‘Dine’ or dene (from ‘denu’) was specifically used to denote a narrow dry valley and is discussed in detail in ‘The Origins of Hertfordshire’ Tom Williamson, pp 171-173, where the herpedine itself is discussed.

Care is needed here as the term is a regional dialect word for a small coppiced area of woodland. The 1840’s Tithe Awards for Harpenden parish show nearly 40 examples of this name applied to these small wooded areas  – as far as I am aware none of them is also a water source.

The Old Cock Pond and the Southdown Ponds

I agree that some water would at times have run along sections the valley from ground sources – the most obvious being the water source on the east side of Harpenden High Street opposite Church Green. This was probably the reason for Harpenden’s foundation. It later fed two breweries and formed a pond until modern times and still affects properties along the High Street.

The run-off has been channelled to the ‘Southdown Ponds’.  I understand that water that used to run beyond these excavations ran into a sink-hole opposite Crabtree Lane and reappeared near South Mimms.

All the above are of course open to challenge, as all good research should be. Far too much ‘history’ is simply repetition of ‘facts’. 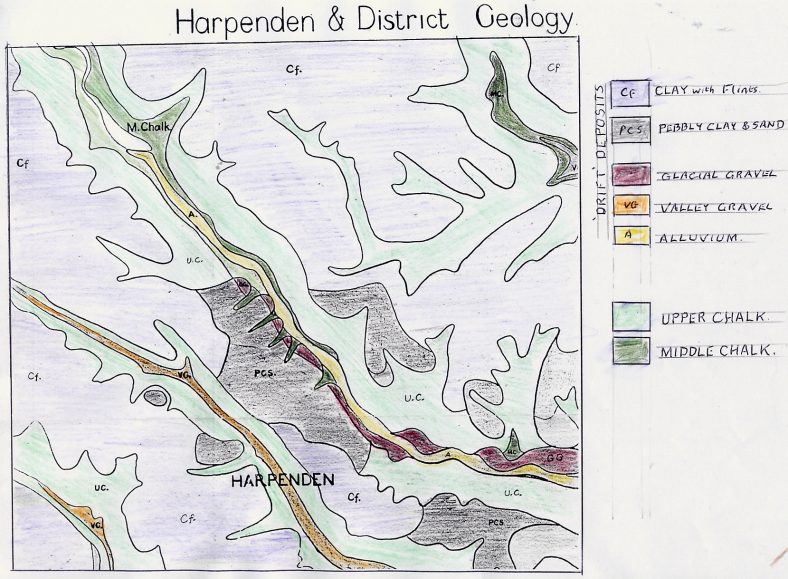