A small community affected by deaths and war injuries

Extracts from Connie Howard’s memoirs, with page numbers. There are copies in Harpenden Library and our Archives.

The outbreak of war through the children’s eyes

In the First World War, 1914-18, Kinsbourne Green women knitted Balaclava caps as well as sock and mittens for the men in the trenches overseas. (P.19)

Soon after the 1914-18 war began Teacher Stella made a stiff brown paper soldier hat for each boy in the little room, and each girl had a white nurse’s cap and apron. We were taught about slings and bandages. We knitted pink and green squares which our teacher joined into blankets for sending to the wounded. (P25)

One day Governess told us that Lord Kitchener would be passing through Kinsbourne Green on his way to Luton Hoo. She had received secret information. Forms were carried out of the school and put on the grass verge by the side of the road. … We all had little Union Jacks. We had seen pictures of Lord Kitchener and we knew he wanted men to fight for our country. Now we were going to see him.

At last we heard a car, a very rare occurrence on our road at that time. Yes, it was Lord Kitchener. We all have an excellent view of him, for his chauffeur slowed up and Lord Kitchener waved to us all.

Afterwards we learned that Governess had been told of the visit, and asked to report if any strangers had been seen in the village. At that time there were lots of rumours and whispers about spies and secret agents. Anyway Lord Kitchener was safe that time, but it had put ideas into our heads. We were on the lookout for spies and secret agents, and out play took on a completely new line. (P.25) 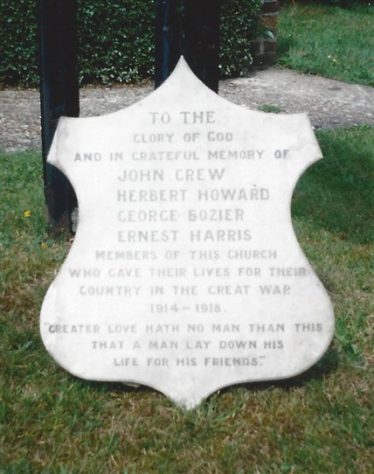 A memorial tablet of marble was erected in the old chapel at Kinsbourne Green and bore the names of the four of our village men who did not return from the 1914-18 War. They were all connected with families who attended the chapel. The tablet was paid for by subscriptions from people of the village. There was a service of Dedication and Remembrance when it was unveiled. It was a flat tablet let into the wall of the chapel behind the reading desk. Since the old chapel was demolished it has not been re-hung but stands in the vestry of the present Methodist Church.

Herbert Howard was “not called at the beginning of the war, for he worked at Luton Hoo as a cowman and was exempt. When he was conscripted in February 1917 my mother and all the family were exceedingly troubled. … We heard that he was killed at the battle of Arras on June 28th 1917. It was so soon after going to France. Mother cried; we had never seen her cry before”. (p.44)

“Fred Howard had enlisted in the Beds Regiment in September 1910 and transferred to the Grenadier Guards early in 1911, serving for three years. He joined Beds Constabulary early in 1914. At the first rumours of war he was recalled to the army. “Fred came back a wreck, wounded and suffering from nephritis and in need of all the care mother and Kinsbourne Green folk could give.” (p.43)

Arthur (Howard’s brother) and John Crew went together. “They were the first to go and volunteer from Kinsbourne Green. … They were sent to France with very little training. … Arthur was very seriously wounded. When he was wounded his mates put him out on top of the trench for dead, left him all night, but in the morning found he was still breathing, so rushed him to the field hospital. He had extensive head wounds, developed tetanus and other complications. It was only due to expert surgery and extremely careful nursing that he did survive. He was sent back to England a shadow of his former self, weighing only six stone. The nurse carried him like a baby from the boat to the ambulance. He was in Colchester Hospital, then he was sent home to Kinsbourne Green a total wreck. As he was the very first soldier to return home from the front in 1915 the people of Harpenden wanted to give him a great welcome. All the dignitaries were on the Harpenden Midland Station and the band was there too, but Arthur was so shattered by his terrific wounds that he knew nothing of what was happening. People on the station were shocked at his appearance.

“Back home in Kinsbourne Green he was able to get the quietness he so badly needed. Mother was so wonderful. She had to feed him with a spoon; he was just helpless. She coped with his terrific moods of depression and violent headaches. His balance was affected and he was unable to walk straight, but rolled from side to side. He always had to wear a steel plate at the back of his head, kept in place by a black band across his forehead. This was because he had no bone at the back of his head. People in Harpenden all knew him and helped him in so many ways. He was one of our Kinsbourne Green boys to suffer most through war. Once he heard a woman remark ‘There goes that man again – he’s drunk again and it’s only ten o’clock in the morning’. He never answered but was hurt and distressed.

When he was a little better he married. He and his wife took a grocers’ shop in Park Street, Luton. His wife died just before the Second World War. In WWII Arthur suffered again at the hands of the Germans, for a Land Mine, probably intended for the Vauxhall Motor Works, demolished a huge area of Park Street. His shop and home, which was on the corner of Bailey Street and Park Street was completely flattened. He lost everything and came home to live here again. The Harpenden and Kinsbourne Green people took him to their hearts, putting him in front of queues so that he didn’t have to wait, giving him a seat in shops, always helpful and considerate. (pp 43-44)