"and a clubhouse for the comfort and enjoyment of the labourers"

This article was first published in Newsletter 112, December 2010. Some information found in the archives has been added.

John Bennet Lawes was the Lord of the Manor of Rothamsted: he founded the experimental station on his estate in 1843. He was a kindly man, and took a benevolent interest in the welfare of the villagers. In 1852 he put aside ten acres of land to provide allotments for the agricultural labourers of the parish, enabling them, in a time of rural hardship, to grow their own vegetables. A few years later he added another ten acres, providing a total of about one hundred and eighty allotments. 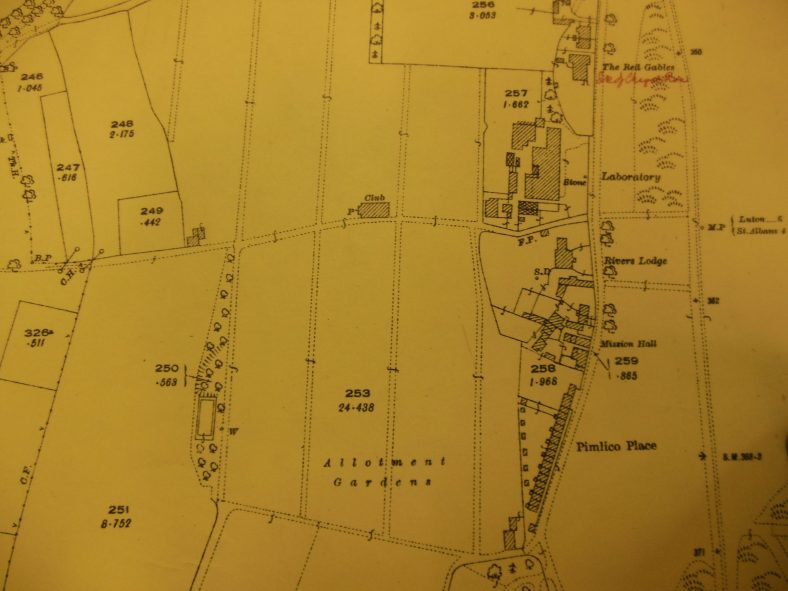 Some years ago we used to claim in Harpenden that these were the first in the country, but later research has shown this was not so. The allotment movement seems to have started in the West Country in the early years of the 19th century: (Wiltshire alone had 1450 allotments in 1833) and gradually spread across southern England. What Sir John did do first, was to provide the men with a club-house. This was built in 1857. “It occurred to me” he wrote later, “that a club-house might add to the comfort and enjoyment of the labourers. My idea was of a large room where the members could have their beer and tobacco, and a smaller room to be used as a library and store” (i.e. a co-operative shop). 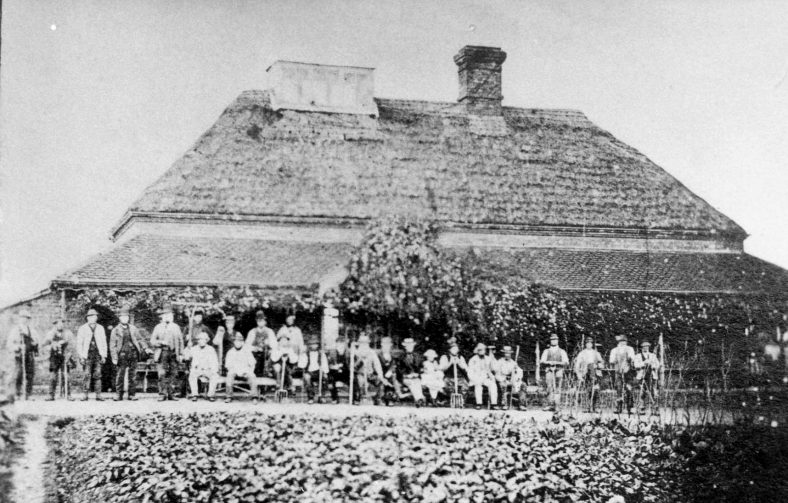 The club house opposite the allotments. Credit: LHS archives – scan of HC 029

Extract from 1924 OS map, showing the site of the clubhouse and allotments, Rothamsted. Credit: R. Ross, LHS archivesNot everyone liked the suggestion, particularly as to the supply of beer. “The idea of one or two hundred working men assembling night after night in one place was by no means approved of,” he wrote, “but as we cannot prevent drinking it appears to be desirable that we should endeavour to lessen and correct some of the evils upon it. If anyone will picture to himself the limited accommodation of a labourer’s cottage on a winter’s evening, with the small fire entirely surrounded by his wife and children, he will hardly blame the man who seeks warmth, quiet and the society of his fellow labourers elsewhere”.

Lawes managed the club himself for the first year. He tried supplying coffee rather than beer: the men were prepared to drink it and pronounced it very good if provided free, but were not prepared to drink it if they had to pay for it. A committee from the members was appointed after the first year and they ran it well; the club was a great success.

In 1859 Charles Dickens visited it: the club appealed to his social conscience and he wanted to see for himself. His brother-in-law was serving, with Lawes, in a government commission inquiring into the sewage of towns, and secured an invitation for him. Dickens spent the day in Harpenden, and the evening at the Club-house. He declined the offer of a bed for the night at Rothamsted, and drafted an article during the twenty-five mile coach ride back to London. It was published in the first issue of his new periodical “All the Year Round” – see a transcript appended below, in which he refers to his host as “Friar Bacon”. 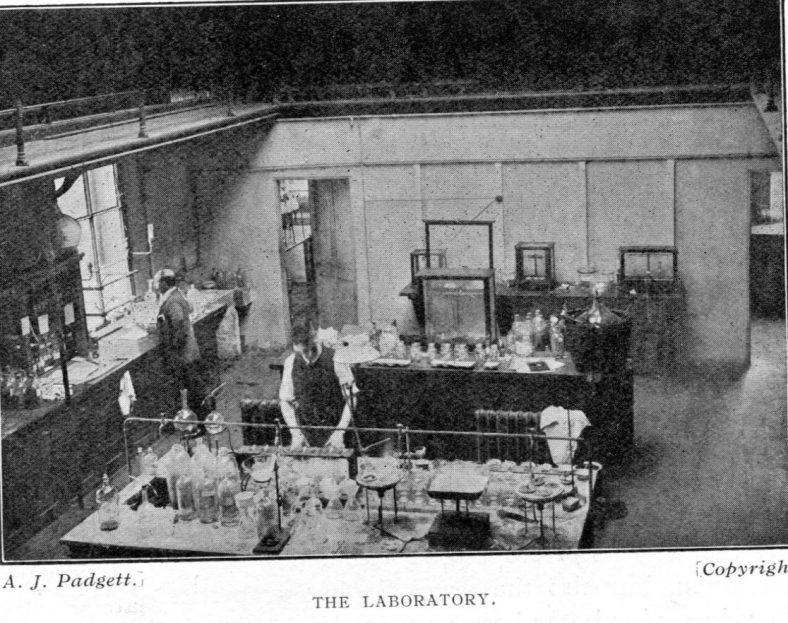 The Laboratory, Rothamsted – used for concerts, lectures and other public events following its opening in 1855 – including the concert described by Charles Dickens in The Poor Man and his Beer. Credit: LHS archives, scanned from ‘Our Land, July 1909, feature on Rothamsted’, RB-MISC G.14

Dickens also refers to a concert held in the Laboratory, “The bettermost people of the village and neighbourhood were in a gallery on one side  …. The performers were the ladies of Friar Bacon’s family, and two gentlemen; one of them, who presided, a Doctor of Music.”

The club flourished for many years. At its peak during the second world war there were three hundred and fifty plots in use, but interest declined in the post-war years. 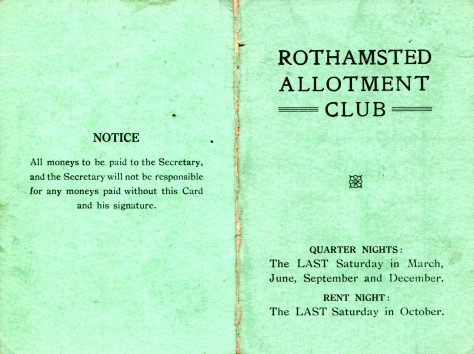 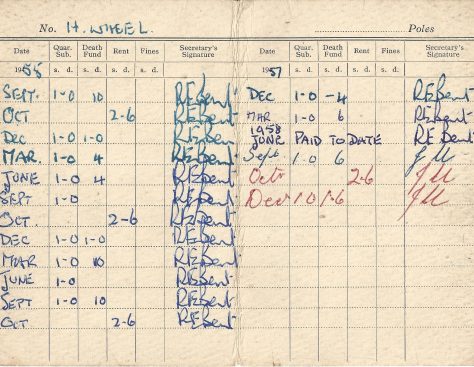 Jack Underhill, the steward for thirty years, died in 1965 and no-one could be found to take over the responsibilities of running the club. He had created a homely atmosphere in the clubhouse, and was especially remembered for his enjoyment of dominoes (archive ref: LAF People). The experimental station kept them for a year but it was an unsatisfactory arrangement, and the allotments were closed from September 1967. The seventy remaining plot holders mostly transferred to allotments in Piggotshill Lane, and the land became part of the Rothamsted farm. The  club-house site, and much of the land, has since been built over. 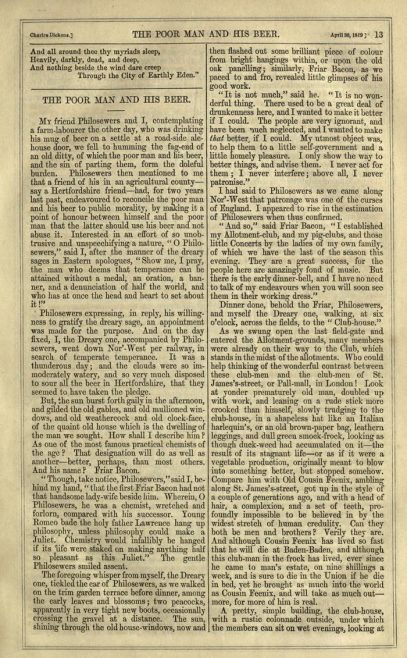 Facsimile page from All the Year Round, 30 April 1859. Credit: Dickens Journals On Line – University of Buckingham