Talk by Prof. Roger Plumb to the Rothamsted Association, November 2013 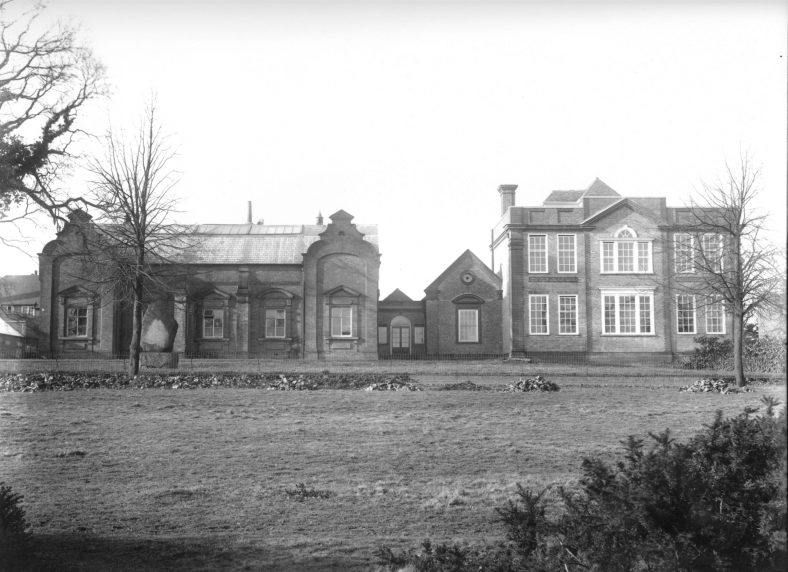 The Russell Archive, held by the Library, contains numerous letters to and from John Russell (Director from 1912-1943) and the Secretary, George Dunkley, with Rothamsted staff involved in various ways during the First World War, as well as documentation of building projects.

In early 1914 plans were drawn up for the southern extension of the north end of the “Russell” or main building fronting the Common, replacing the old, crumbling Testimonial Laboratory (built in 1854-5), with the central section and matching south wing that we can still recognise today. This was to meet the needs of the expanding research work, probably prompted by the premonition of war and the need for agricultural self-sufficiency. The Lawes Agricultural Trust Committee launched a public subscription fund in February 1914 (The Lawes-Gilbert Centenary Fund) to match the Board of Agriculture’s commitment to meet 50% of the £12,000 costs of building and fitting out of the new laboratories and offices. By April 1914 most of the funds had been raised, and building work started on 9 August 1914 – just five days after the start of the war and of mobilisation. Work proceeded rapidly, with the walls reaching full height in February 1915, ‘snagging’ was started in June 1916 and the laboratories, complete with walls washable with formaldehyde, which must have been specially commissioned. Formal opening of the building by the Parliamentary Secretary to the Board of Agriculture, Sir A Griffith-Boscawen with Professor Henry Armstrong of the Lawes Agricultural Trust in the Chair was, however, delayed until 21 October 1919.

The Outbreak of War 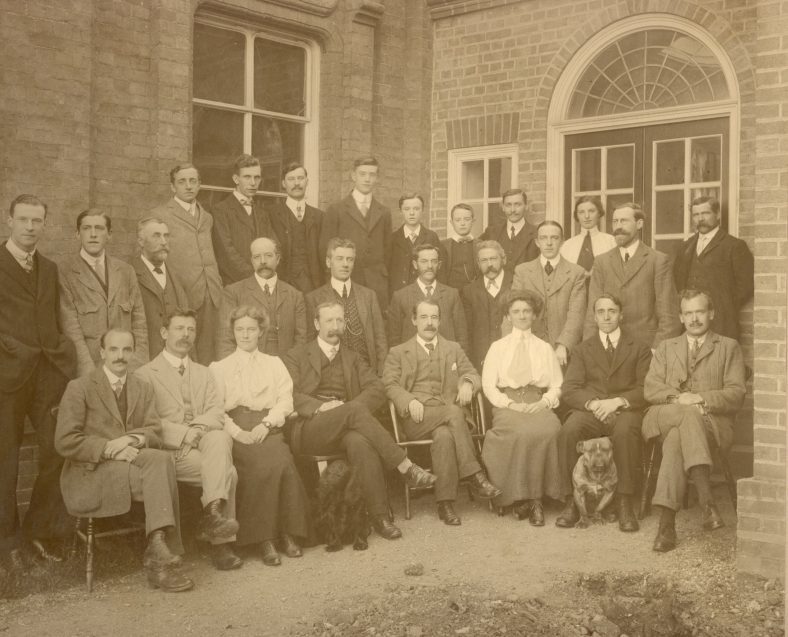 Like many people Dr Russell had been away on holiday when war was declared. By November he had eight soldiers billeted in his study. Minutes of the Lawes Agricultural Trust Committee record correspondence with the Board of Agriculture concerning arrangements for members of staff who were called up: all posts were to be kept open; continuity of employment was suspended for those serving in the forces; no employee should lose out financially. However any money saved on salaries was to be returned to the Board of Agriculture.

Depletion of staff as scientists volunteered

A number of members of staff volunteered early in the war.  Herbert George Martin, a bacteriologist who had joined the staff in 1913, served some months in Belgium, and died at Ypres on 3 May 1915. He is included on the memorial in his hometown Abergavenny, and on the Rothamsted Roll of Honour. Kenneth Richard Lewin who had been recruited as a protozoologist in 1913, was commissioned in September 1914 and died on 9 March 1916, killed by a sniper while having breakfast, also near Ypres. Like other colleagues, he maintained correspondence with Rothamsted, including about his scientific work. He is commemorated on Harpenden War Memorial and also in his hometown of Radstock.

The Director’s Secretary, Gertrude Bates, rushed to London and wished to enrol as a nurse, but only trained nurses were accepted. Instead she worked voluntarily as secretary to the matron of Addenbrooke’s Hospital in Cambridge, which was a major casualty treatment centre. She remained on the staff on half pay, but by 1917 her family had left Harpenden and there is no further record of her in the archives. Winifred Brenchley, a botanist, used her good organising skills for fund-raising and providing comforts and clothing for serving soldiers and their families

Althelstan Henry Bowden, an assistant in the Chemistry Department since 1909, volunteered in November 1914, and was initially posted to Newmarket. When deployed to France, he was astonished to find that all the churches were Roman Catholic: like many of his generation he had no idea what to expect when leaving the shelter of home. He was injured at Arras, spent time in the Birmingham War Hospital, and finally at Halton camp near Tring. George Lawrence, the Director’s Gardener since 1912, joined the Hertfordshire Territorials in August 1914. He was deployed to France in September 1916, but appears to have returned relatively unscathed.

Bernard Augustus Keen, a soil physicist, served in Palestine, contracted dysentery at Gallipoli and convalesced initially in Alexandria, before returning the England but was subsequently posted to Palestine. He later spent time at Tring before being deployed to the Woolwich Arsenal.

There was much correspondence between Dr Russell and the local military tribunal in an attempt to seek exemption for staff after conscription was introduced in 1916. The Royal Society could certify chemists but not entomologists for exemption. Alfred Appleyard, a chemist, was sent to the Munitions Department, as were several other chemists from Rothamsted, initially at the Lister Institute in Chelsea. He worked with Weizmann (better known for his work as a leading Zionist) on the manufacture of acetone and then moved to run the factory in Kings Lynn, and later near Bombay. After the war he emigrated to South Africa. Correspondence between Russell and Weizmann is likely to be of interest to historians of the Zionist movement. George Sawyer was another chemist exempted from active service who worked at Kings Lynn, subsequent to which he did serve in the army and was wounded, but little is known of his role: he was honourably discharged in December 1918. He appears in the staff photograph taken in 1919, but died in 1926 in the Star and Garter Home, presumably from effects of his war service.

All appeals to retain farm staff failed. The Board of Agriculture evidently carried less clout. However, if men were still attached to regiments nearby, Russell was sometimes successful in getting them back to help with the harvest. There is interesting correspondence with the tribunal concerning ploughman, Herbert Currant. When Mr Eames, the Rothamsted farm manager, was called up, Mrs Eames ran the farm and was said to be the first/only person to do so at a profit.

Another notable event was the Zeppelin raid on Broadbalk (the long term experiments started in 1843). During the night of 2-3 September 1916 three or four Zeppelins appeared over Harpenden, dropping bombs on Broadbalk – and also on Scout Farm, Hammonds End (and in St Albans, London Colney and South Mimms). An eleven foot crater was made in a plot at the upper end of the field. There are no clear records about the effect of this on experimental records. Nor is it known if Rothamsted was specially targeted – perhaps this might be revealed by searching German records. The Zeppelin raids made their mark, and the first Zeppelin to be shot down was over Cuffley on the night of 3rd September but it is not known if this was the one that bombed Broadbalk. The Red Cross sold bits of it, made into various ornaments, to raise funds. 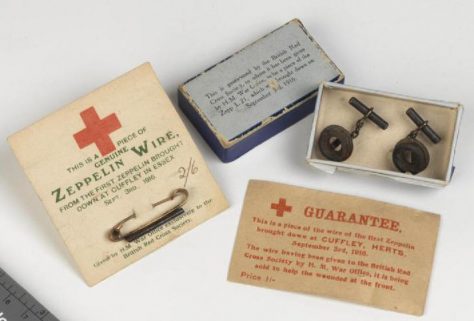 Medals were awarded to Sergeant George Lawrence (Military Medal); Kenneth McLennan (Military Cross); and William Weir, (Military Cross and Bar). During the war years Thomas Wilson of Rivers Lodge, who did translations for Rothamsted, and George Dunkley, the unsung hero of Rothamsted died in Harpenden. 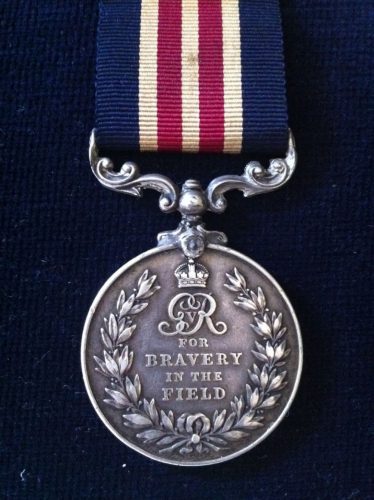 After the war, a memorial to those who had died was proposed. About £100 was collected from staff and a memorial tablet was commissioned from W Reynolds-Stephens, an Arts and Crafts artist from North London. It has hung since 1920 in the Russell building: its future location is uncertain. 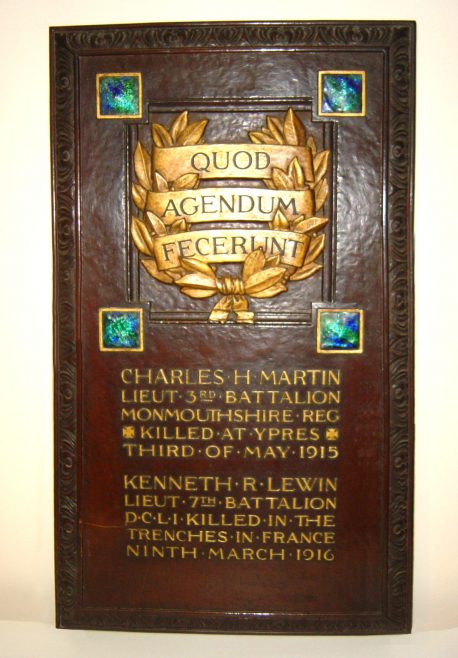