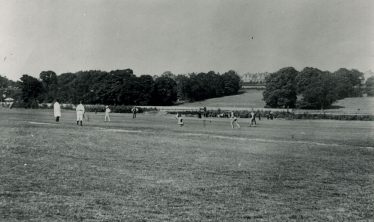 zoom
Before the houses were built in Southdown Road
E Meadows

According to “Famous Cricket Clubs Sept 1935”, the date of the formation of the Harpenden C.C. is unknown, but it was thought the club is at least 80 years old at that time.  Cricket has probably been played on this old Hertfordshire village common almost since the early dawn of the game.

In 1892 the pitch was levelled, and five years later water was laid on; before that the local fire brigade had sometimes to be coaxed to practise upon it with the hose.  The first president, Mr T.H.W. Blake, played in 1880, and continued to do so until 1902.

The most famous cricketer to wear the Harpenden colours was the late C.H. Titchmarsh, who assisted Hertfordshire County for 28 seasons.  He also represented the Gentlemen against the Players, and went to Australia and New Zealand with A.C. MacLaren’s team in 1923.  Titchmarsh started with Harpenden in 1909, and his last innings for the club, ten years later, was one of 103 not out against Hampstead.  During the period that he assisted Harpenden he scored over 9,000 runs for an average of 47 and obtained 19 centuries.

It was in 1913 that Titchmarsh scored 1,163 runs for the club, the highest aggregate of any past or present member.  For the M.C.C., Herts and Harpenden that year he hit 21 centuries – a playing record in any type of cricket – and he compiled 4,016 runs with the splendid average of 62.75.

G.Bray, of Essex started his cricket career with Harpenden, as also did his brother, L.Bray, who has represented the Royal Air Force.  Another well-known member, A.E.Dandy, who began in 1892, went on playing for 33 years, and captured over 1,000 wickets.