Living on the Common: a landscape history of Harpenden Common

Report of a talk given to the Society on 20 September 2016 by Anne Rowe, freelance historian

Commons were lands owned by the lord of the manor, but used by his tenants for grazing animals and collecting fire wood. A common was semi-natural rough pasture, heath or wood.

With the Lord’s permission, tenants sometimes enclosed a bit of the common for their own use, for which they paid rent. These ‘intakes’ are still detectable, often oval in shape to save on fencing.

In Hertfordshire, commons were mainly situated on poor agricultural land on London Clay or on high rough ground in the chalky Chiltern Hills. Common lands were also known as ‘wastes’. Even so, in the 18th and 19th centuries, some of this was ploughed up. The National Trust has taken over much of the surviving common land around Berkhamsted and Aldbury.

The importance of pollarding 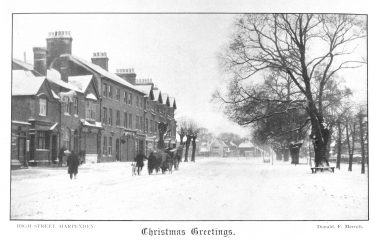 Pollarded trees in Harpenden High Street, as shown in a Merrett Christmas card, c.1900. The row on the lsft shows regrowth after recent pollarding, the tree in the foreground on the right shows many years’ regrowth.

For centuries, common woods were pollarded regularly. Pollarding is the process of regularly cutting the top branches and twigs out of a deciduous tree, which allows new branches to sprout out next spring. The cut material is good for firewood and other purposes, depending on the type of tree. The trunk becomes thick and gnarled and lives a lot longer than a non-pollarded tree. Where trees were well spaced, grazing animals could forage beneath.

Tree cover on the commons gradually decreased due to animals chewing off fresh saplings. On commons on acidic soils the trees were replaced by heathland, with its own special flora, e.g. gorse and heather, which were cut for fuel, animal bedding and winter feed. 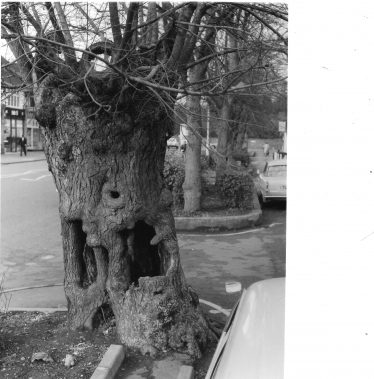 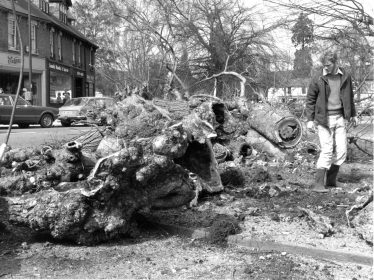 Elm stumps being removed from outside Sainsbury’s , 9 April 1980

Key documents still exist, providing details of the history of some commons. Anne drew on the resources of Hertfordshire Archives & Local Studies (HALS) and the Harpenden and District Local History Society picture archive.

Documents at HALS reveal that there were many trees growing on Harpenden common in past centuries. The High Street developed along an entrance to the common and was itself part of the common. A document of c1840 records trees growing outside every house in the High Street, almost all of which were lopped regularly by the householder. A tree planted outside a house by the owner and regularly pollarded was a permanent source of firewood. The First Edition OS maps (1879 for Harpenden) are considered the most accurate in the world. Every tree in Harpenden High Street was marked.

The boundary of Harpenden Common is still very similar today to that marked in 1838. At that time it was more open, whereas today blocks of woodland have grown up in the absence of grazing animals. Gnarled stumps are evidence of the origins of the common. Elm, beech, oak and ash were all pollarded, also hornbeam, which made the best charcoal. Hertfordshire is the northern limit for hornbeam. Pollarding is done at head height so the new growth is beyond the reach of livestock. 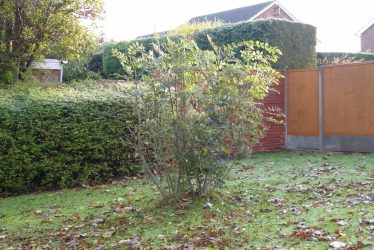 Recent regrowth on a ‘coppiced’ tree in Cranbourne Drive, Harpenden. The tree was cut down in 2014 but the stump was not grubbed out.

Coppicing is another method for cultivating wood, where the tree is cut to ground level. The soft new shoots have to be protected by fences from nibbling animals. Hazel is sometimes coppiced.

A strip of Harpenden Common lying between the Baalamb trees on Bull Road and the Railway Hotel is frequently bare in hot summers. It marks where a section of road was taken out of use and grassed over in the 1970’s. Traffic from Southdown Road was diverted along Bull Road, which had been widened, to a newly created roundabout on the main road, making it safer for traffic.