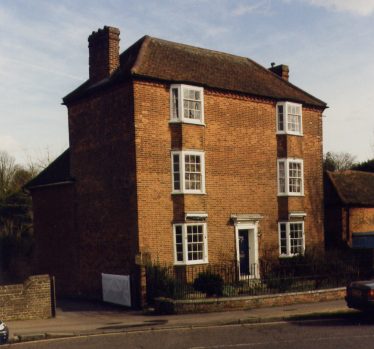 Little is known of the history of this house, but in 1799 it was described as “James Floyd’s own dwelling with shop adjoining”. He was a baker so the shop may have been a bakery. The front garden was described as having been “taken from the waste” – ie from the Common.

However, an Indenture dated 1868 has just been donated to the Society, and this appears to refer to this property and land adjoining – ” … all that part of the Waste of the said Manor … abutting north upon certain buildings formerly belonging to James Floyd Gentleman and afterwards of Richard Oakley south and east upon certain fields or meadows formerly belonging to John Munn … and west upon Harpenden Common.”

The Indenture will be transcribed and placed on the website in due course. Volunteers for such tasks are very welcome.

Annie Spackman, daughter of Dr Spackman of Bowers House, was a close friend of Theodora Wilson, who makes several mentions of her in her Journals. She lived at The Dene for many years until her death in 1937.