An analysis of the 16th and 17th century timber-framing

This study was first published in Newsletter 116, April 2012 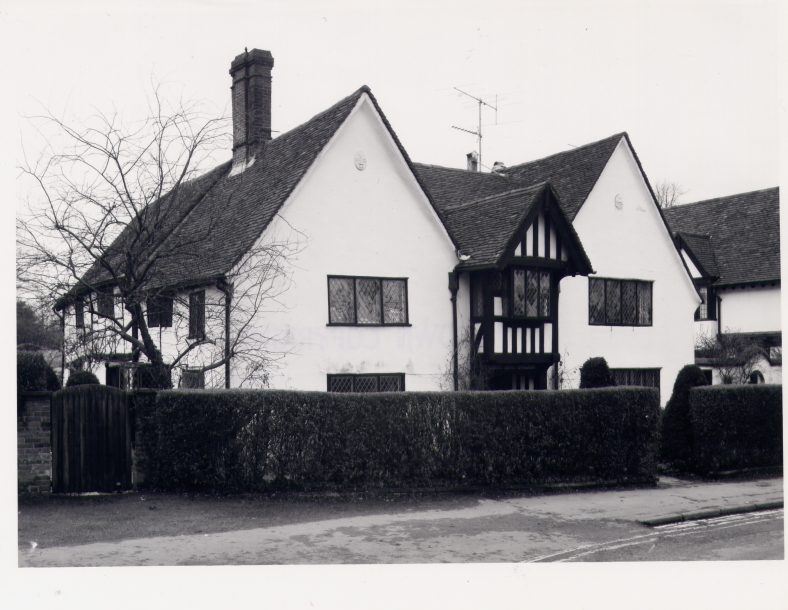 The timber-framed double range on the left, with the 1928 porch and extension on the right – facing Leyton Road – LHS archives – copyright RCHM, 1977

Coach Lane Cottage, also known as Gable End Cottage, consists of an old timber-framed house with, to the north, additions of 1928 comprising a two-storied timber-framed porch and a matching gabled range to give a symmetrical frontage to Leyton Road, formerly the main road to St. Albans.

The east gable end (facing the road) is of white-washed plaster, the west gable end and 4-bay long north and south walls are timber-framed and infilled with white-washed brick noggin except for two wattle and daub panels on the south side close to the west end. The roof has plain tiles and a single brick stack emerges at the ridge just east of centre. The windows are of leaded lights with diamond quarries; most appear to be modern although in their original openings. The building comprises two separate 2-bay 2-storey ranges abutting at their gable ends and aligned E-W. The West range (trusses T4-T6) is set on rising ground about 2 feet higher than the east range (T1-T3). 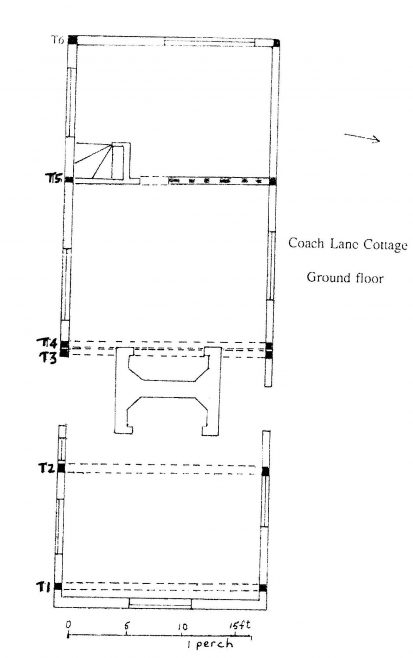 Internally the ranges are similarly constructed: the storey posts of all 6 trusses have gently tapered jowls and curved braces to the tie-beams and wall-plates. Both ranges have clasped-purlin roofs with curved wind-braces. But there are differences. The floor-joists of the east range are laid flat in the medieval fashion, and are supported by central tenons to a large transverse beam at the central truss (T2) whereas joists of the west range are of square section and have soffit tenons with diminished haunches.

The truss T2 is open giving one large room on both ground and upper floors. The upper room was originally jettied (T1) to the road but is now underbuilt in brick. The former existence of a jetty can be recognised because although the jetty plate (beam supporting the jetty) has been removed, its ‘shadow’ remains on the undersides of the joists. The plate appears to have been supported at its centre by a post with a brace to the jetty bressumer. The original upper floor window has been replaced but part of the sliding-shutter top groove survives. 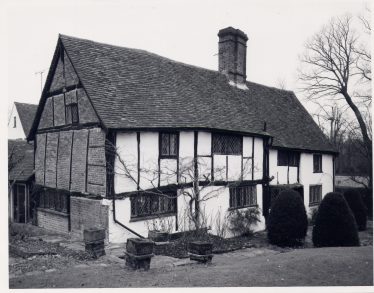 The similarities in construction of the two ranges show that they cannot differ greatly in date; the east probably constructed in the mid 16th century, the west added in the late 16th. There is little sign of weathering on what little can be seen of the west face of T3, another indication that the interval between building phases was short.

The brick chimney, which occupies much of the west bay of the east range, is not contemporary with it for common joists were removed from the bay to allow insertion of the chimney in the late 17th century. It obscures, though its construction may have removed, evidence of any earlier heating arrangements that there might have been. Decoration is limited to simple chamfers and stops on framing and to scalloped arrises on fireplace jambs.

The east range alone did not have the essential domestic facilities to function as a complete house. It is a building of some, though modest, pretensions which suggest it was built as a parlour/solar cross-wing addition to an existing structure probably on its north side, though material evidence for this is lacking. The sites of the original entrance and the stair to the upper floor have eluded us: the stair next to T5 is a later insertion. It is clear, however, from the extent of weathering on the north long wall, that any abutting structure must have been removed long ago, but not before the brick chimney was constructed, and its service functions could be transferred to the west range. At the same time an opening was made in the south wall creating the lobby-entry that survives.

The photos below are Crown Copyright – taken on behalf of the Royal Commission for Historical Monuments in 1977, when members of the WEA Local History Class were studying Harpenden’s timber-framed houses. 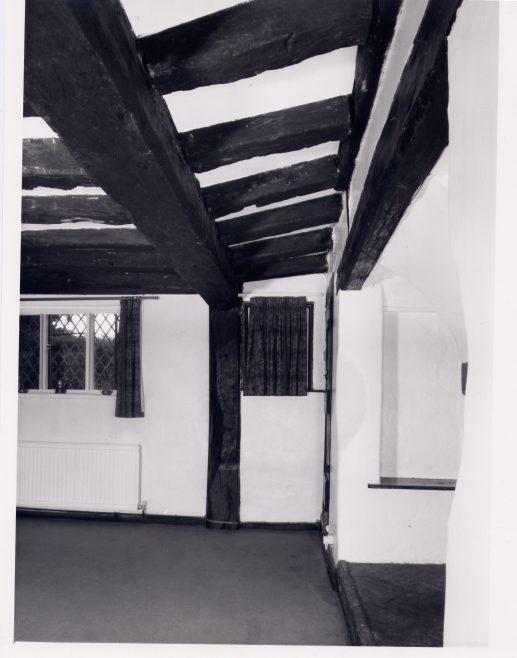 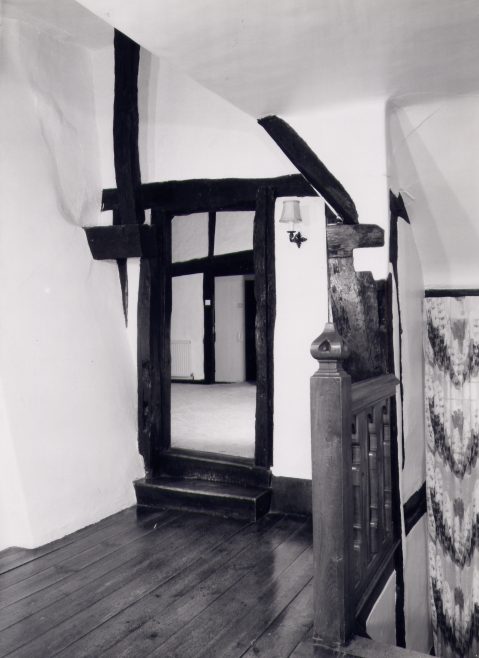 East range first floor, viewed E to W; North wall of chimney (left). Abutting timber trusses of the east and west ranges. Part of the east truss tiebeam has been cut away to provide headroom for the doorway set in the west truss. Reproduction stair newel post and banister – LHS archives – copyright RCHM

By John and Valerie Carpenter