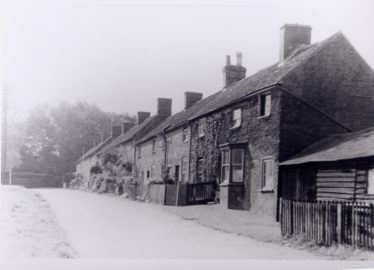 The sixteen terraced cottages forming Pimlico, in West Common, Harpenden, were built in 1822 by the Benefit and Annuitant Society of St Albans.  The Society was formed in 1810 (registered under the Friendly Societies Act) and met in the Blue Boar Inn, St Albans.  Nothing further is know of the Society, and the Inn, which was in St Albans Market Place, has long since disappeared. It seems probable that the cottages were built as an investment to be let to farm labourers, and the small triangular piece of land on which they stand was probably obtained from the Lawes family of Rothamsted Manor.  The rents produced about £150 per year.

Each cottage originally consisted of just a downstairs living room with a bedroom above.  Access to the bedroom was via an opening in the living room ceiling presumably by ladder.  The opening to the bedroom was found in the ceiling in No 32 during modernisation in 1956.  Whereas the dividing wall between the cottages was only one brick thick the rear wall of the sitting rooms is of double brick thickness clearly indicating that this was originally the outside rear wall.  Further evidence of this came to light when it was found that the roof rafters at the rear stop on this wall.  At some unspecified later date the roof was extended at the rear down to a new outside wall making space for a kitchen/scullery with a small triangular space above known locally as a slip-room.  An opening was made in the original rear wall of the bedroom from which a winding staircase led down to the kitchen, and a dormer window installed to give headroom on the staircase.  To carry the roof extension down to the new rear wall rafters were laid alongside the original rafters.

It is known that families of parents with five children lived in the accommodation thus provided.  Unfortunately it has not proved possible to ascertain the date of the conversions just described.

A common bakehouse was located to the southernmost cottage and this is referred to in deeds as late as 1933 so presumably the small cooking ranges found in the living-rooms were a comparatively late fitment.  It is not known when the bakehouse was demolished. 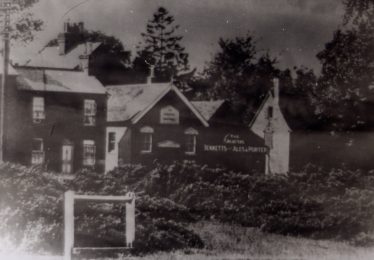 No 23 West Common attached to the northern end of the terrace does not form part of Pimlico Place.  In living memory it was a beer house known as The Cricketers’ Arms. In the cottages to the rear was a local Police House.

Outside water-flushed lavatories were built in circa 1911 by Curl and Sons, Harpenden builders.  These required mains water and a pipe was laid along the rear of the cottages.  From this pipe three stack pipes were attached giving the cottagers a piped supply; until then they had obtained water from three wells which, although no longer in use, still exist.

It was probably at this time that a gas main was laid also along the rear; this gave a supply for a light in the living room and for gas cookers.  It seems likely that the then owner, Mr W Smith of The Warren, Harpenden, was something of a benefactor.

Woodbarns are consistently mentioned in the deeds and one or two of the old wooden sheds still remain.  Because of the triangular shape of the site insufficient space for these barns existed at the southern end of the row with the result that that the barn allocated to a particular cottage was not located immediately behind that cottage.  Since the land was quite open without fences this was no inconvenience but it gave rise to some problems when the cottages became the property of different owners.

The first record of a change of ownership is a poster in the County Archives, Hertford.  This advertises them for sale by auction at the Bull Inn, Harpenden on 9th November 1870.  The purchaser is promised an abstract of title commencing with conveyance to “the late Mr Joseph Parsons” dated 1837.  From this it is thought that Mr Parsons bought the cottages from the Benefit and Annuitant Society.  Although no details of the result of the auction sale can be found deeds available show that the cottages were owned in 1888 by a Mr Edwards.  Incidentally the Bull Inn is now a private house No 27 Leyton Road Harpenden.

Mr Edwards had bought the cottages with a mortgage obtained from Messrs E S Wells and C Harris in the sum of £1,000 at 5% per annum interest.  From this it seems that the cottages had fetched approximately this sum at auction.  Mr Edwards was soon in trouble – the mortgage was due to be repaid on 28th February 1888 but on 6th April that year he was declared bankrupt.  The cottages were again put up for auction this time at the Corn Exchange, St Albans on 8th June and went to Mr W A Smith of the Warren, Harpenden, for £920.

Mr Smith died in 1928 and the cottages were then sold to Mr G L Roberts of Sawbridgeworth for £1,200.  Later in the same year Mr Roberts sold to Mr J S Shepheard of Alma Street, Luton, again for £1,200.

The next sale was to Mr A Parker of Hopton Mirfield, Yorkshire for £2,500 in August 1944.  At this time the rents varied from 4/- to 7/6d per week inclusive of rates and water rates.  It is not clear why there was this difference in rents.

Mr Parker was the last “en bloc” owner as he disposed of the cottages individually at an average price of about £450 giving him a total of about £6,200.

Pimlico is included in the list of buildings of architectural or Historic interest in connection with the provisions of Section 30 of the Town and Country Planning Act 1947.

By A N Kingwill (Herts Countryside 1973)