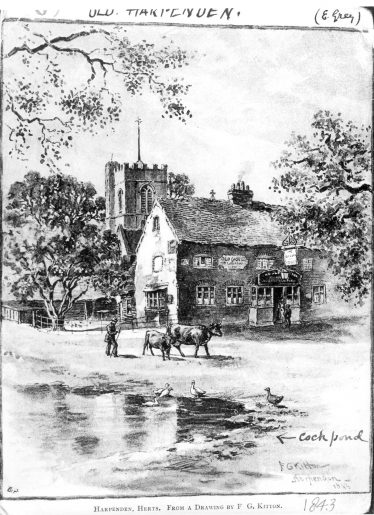 To the Editor of the Herts Advertiser:

Sir, May I be permitted through the medium of your valuable paper to call attention to the matter of the pond in the centre of our village, which venture to say is not in any sense ornamental, but on the contrary, very much the reverse, and in dry seasons very objectionable, and unhealthy from the mud and refuse which is exposed to the sun’s rays. I would like to suggest that the time has come when it ought, and can, be done away with, and the hollow which would thus remain be filled up and grassed over, and thereby add one more to our many gem-like village greens. I think there are but two or three gentlemen in the village who use this pond for their cattle, but now that water is laid on throughout the village, I cannot but think it might, at a very small cost, be made available for this purpose. I make no doubt whatever if this was done the same liberal hand which is at present engaged in improving the village would also take this matter in hand. Thanking you, Mr Editor, for finding space for the above. 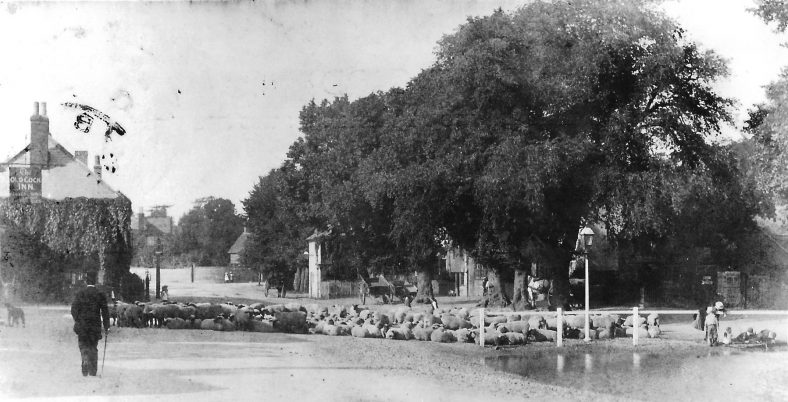 The Cock pond with a flock of sheep, late C19

Sir, I am sorry to be quite unable to agree with my good friend and neighbour, Mr Rothwell, in his wish to get rid of the pond at this end of the village. To do what he wishes would be to destroy one of picturesque features of the village, and to inflict a real unkindness upon the animals, wild and tame, which find it their most convenient drinking place. 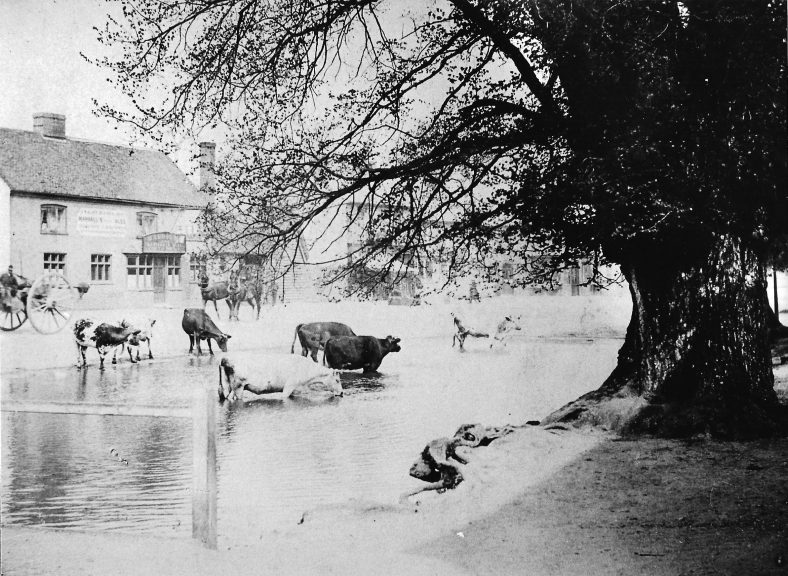 Everyone knows that cows and horses prefer drinking the well-aerated soft water of an open pond, to the best water which can be given them from pumps or waterworks. Any notion of danger to health from the pond is quite groundless. I am quite sure that a very large part of my parishioners share my feeling on the subject.

Sir, I quite agree with Mr Rothwell’s letter on this subject in your issue of Jan 4th, for this pond certainly is a nuisance. What beauty is there in a pool of water in the main street of the village? I say none, for the water is generally of a very dark and dirty colour, and after a horse and cart has been through, an unpleasant odour arises therefrom. 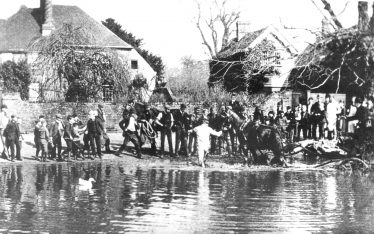 Horse and cart being rescued from the pond 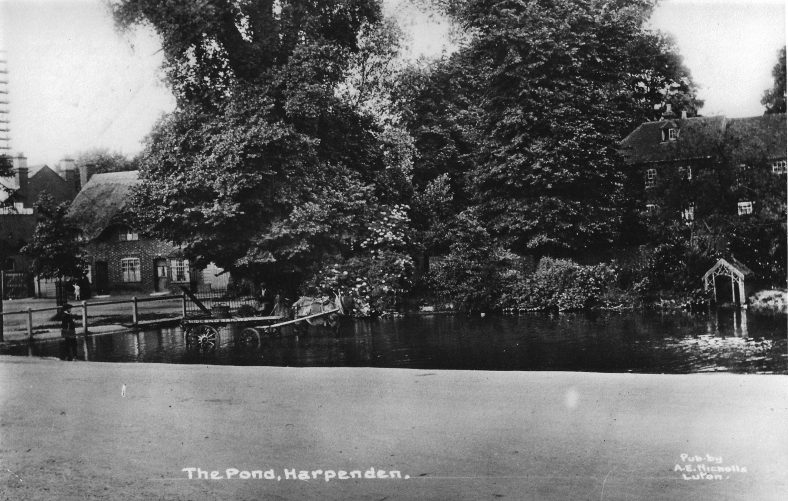 Cock pond, with horse and cart – Bowers House and duck house on the right

It is also dangerous to a certain extent: the depth is certainly not great, yet it happens, about four days at the time of the whole moon, the gas-lamps not being alight (another inconvenience), and the night being dull, one not used to the district might suffer considerably from a ducking. It is also very annoying for pedestrian to cross over near Mr Dunckley’s shop, in fact after there has been much rain, and this said pond has overflowed, which is often case, a lady or young person could not possibly step over. These affairs should be considered, and the pond done away with, for I think that a majority would be in favour of its destruction. A water trough could easily be furnished for cattle, etc. at a very small cost. As the village is growing, the authorities should consider the public and their own interest, by increasing the comfort and welfare of the inhabitants, by making this and other numerous improvements. 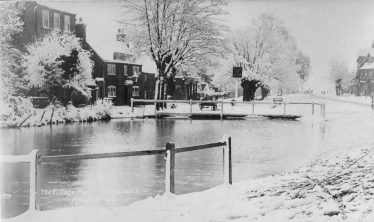 The well-filled pond in winter

Sir, I am sorry that our good rector, Canon Vaughan, cannot see with me in the matter of our village pond, but I don’t suppose he will think the worse of me on that account, as it regards the picturesque side of the question. I admit that when the pond is full it is pleasing, and picturesque to see the feathered tribe enjoying themselves therein, and also to see the cattle contentedly taking their drink in passing. But then there is another side of the questions, which is that pond is not always full, and then the unsavoury part comes in. Under these circumstances, I have frequently seen a waggoner drive his team through the pond, churning up mid and water into the consistency of pea soup, after which the cattle enter for their accustomed drink. I have come to the conclusion that cows, like other animals I have met with, don’t exactly know what is best for them, and therefore we must educate them up. I know full well that aerated water is best for cattle, and what I would suggest is that, which a correspondent who signs himself ‘Improvement’ in your last issue suggests, namely that a large trough be filled from the main, and kept filled, and thus the water would be become thoroughly aerated and suitable for cattle, I would not forget the doggy tribe, but would provide a smaller trough for them and other small fry.

Sir, Someone threw a stone in our pond. It has raised a ripple, circling wider and wider, but which, I hope, will not die away in the miry edge of the subject. ‘Improver’ objects to the odour which he says arises when the lowing kine come hither to drink, but the doctor [Blake], whose house looks so beautiful with the trees and pond in the foreground – for forty years has not found the odour unbearable; he has not called it unpleasant even. From the pond to the shop mentioned by ‘Improver’ is a long stride, but let us hope he and other small persons may get over it in time. Even if we filled the pond the stream past that house would be none the less, and the channel is a natural one for surface drainage. Many who live near St Albans have a horror of what has been done in the name of improvement because the word has been practically synonymous with annihilation and vandalism. I am sure many will agree with our rector, who has shown his kindly nature and said so much that is good in his short letter to you. By all means improve the pond. Enlarge it if you like. But abolish it – Never!

I enclose my card and remain your truly, G, 25 January

NB The pond was finally drained in 1928/9! Gardens were created. In 1939 an air raid shelter was dug beneath. For the Diamond Jubliee in 2012 the gardens were redesigned as a Sensory Garden 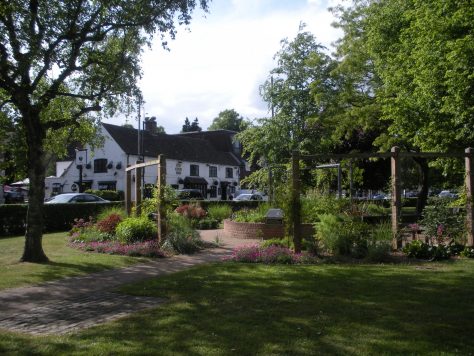 The Cock Inn and Sensory Garden