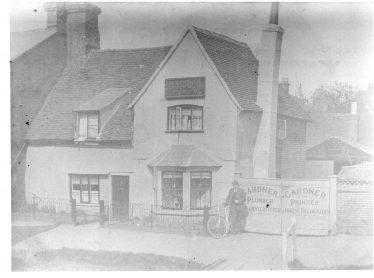 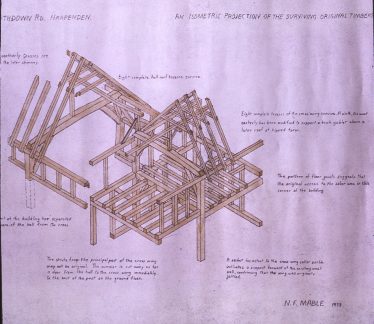 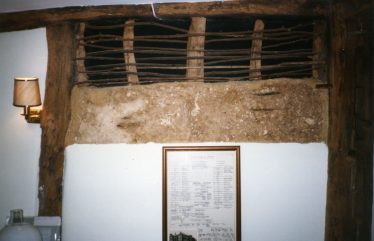 One timber-framed house was recognised as being truly old by the Revd N. Mable, and it was through the attention which he drew to it that it has been preserved from demolition.  This building at 2 Southdown Road, is now being sympathetically restored by its new owner who is planning that the slight remains of a wall painting and part of the ‘basket work’ in a wattle and daub wall shall be kept exposed.

The house is thought, by one expert, to date from the early sixteenth century, while another considers it to be rather older, since the wooden frame-work of an inside wall is styled in the fashion of an earlier period.

The general plan of the house is that of a hall and cross wing, though the northern end of the hall has been lost.  It was most certainly a true hall house open to the rafters, these being well covered with the soot of wood fires on the earth floor.  To make an upstairs room, a floor was inserted above the hall in the seventeenth century, at the same time, a chimney, possibly wooden, was built.  The present chimney stack was probably built in the early eighteen hundreds when other alterations were made – the wing, which had been jettied, was cut back so that its upper storey no longer projected; a bay window and a fire-place added to the comfort of the parlour in the cross-wing, and stairs were inserted behind the parlour.