Tracing the story of a storage jar

Andrew (Morris) said: “I’ve been an avid bottle collector for many years now, and I’ve recently acquired this piece from a UK auction. The picture should be self explanatory but I would like to know the whereabouts of Island House. Please contact me for more Harpenden bottle and jar pictures.” 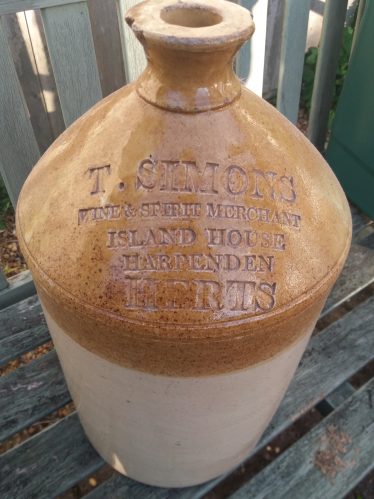 Island House is now Lincoln House or 34 High Street on the ‘island’ between the High Street and Leyton Road. Number 34 includes at the present day (2018) The Cutting Room, Halifax Building Society and Curtis Estate Agent.

See below for more information 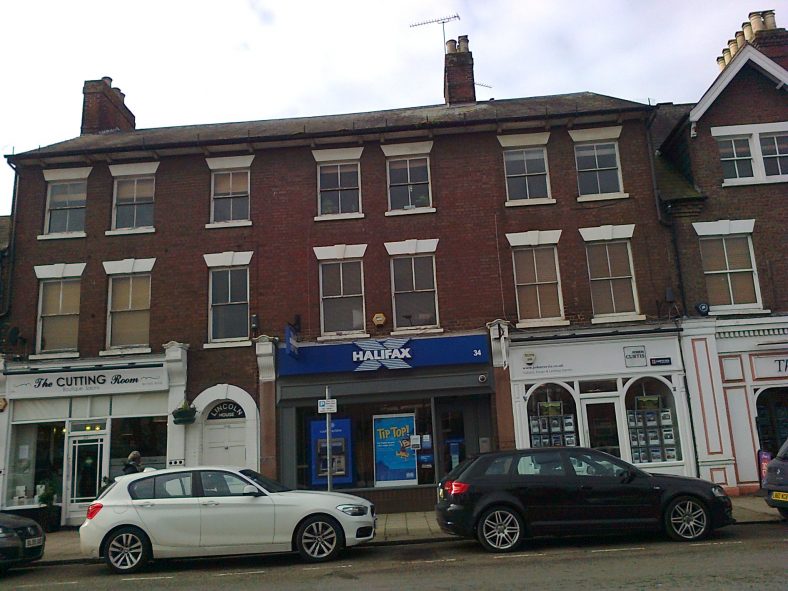 The following information has been collated from a number of sources including from Geoff Woodward; the WEA Wheathampstead and Harpenden booklets; census; Ancestry.com; Kellys Directories; Electoral Registers; an article in Society Newsletter No.53 by Mr & Mrs Deans (Mrs Dean being a member of the Simons family)  and others.

The Simons Families of Harpenden and Wheathampstead 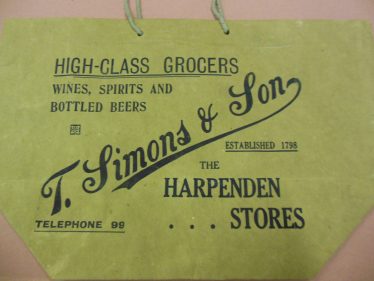 Which member of the family established the shop is unclear but a George Simons is included under Harpenden in the 1832 poll book and in the 1841 census George Simons (a baker) and his wife Maria (born in St Albans) were living near the Old Bell and it was their son and grandson (Thomas senior and Thomas George) who had the Thomas Simons bakery and grocery business so it would be them named on the bag, flagon and bottle.  George is recorded as not born in Hertfordshire and he died in 1845 so is not in the 1851 census for us to find out where he was born.   In the 1839 tithe awards a George Simons owns but does not occupy plot 569 – a cottage and garden behind the premises on the west side of Leyton Road.  He does occupy a bakers shop at plot 588 fronting onto the High Street.  So it would seem that for a time at least he was living near the Old Bell and trading in the High Street while his cottage was tenanted by William Wells.  It could be that his widow and daughter were in the cottage at the 1851 census as they were in the right area. 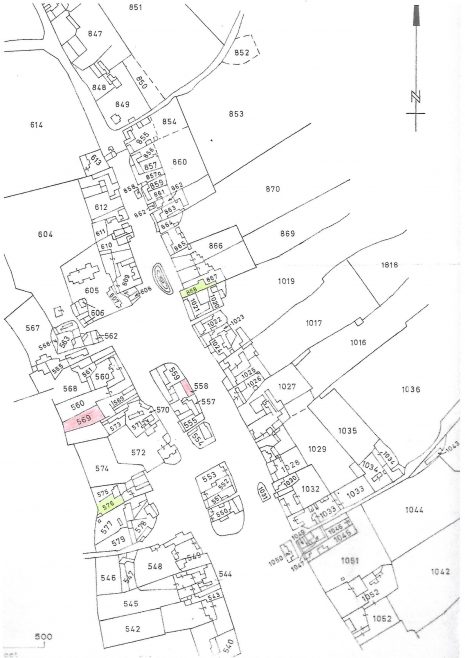 George was not a sibling of William Simons who had property in Harpenden at the time and was also born out of county  (see Wheathampstead below).  If they were related that relationship has not been ascertained.

In 1841 Thomas senior is with his parents but by 1851 he is married to Ann (from Lilley) and is described as Baker & Corn Dealer and probably living at the shop; in 1861 he is  Farmer of 150 acres, Baker & Grocer; in 1871, by which time he, his wife and family are in Island House, he is a Grocer and Baker. Presumable the grocery was by then more lucrative than the bakery.  His daughter (Annie) was a book keeper probably for the shop for in 1881 at the age of 27, with her parents now farming at Cell Farm, Markyate, she is in charge of the business with help from her sister Ellen and aunt, Esther Foster.  Grandmother Frances Foster (aged 87) is also a member of the household.  Two other sisters are with their parents at Cell Farm and two brothers Thomas George and Henry Edgar  are at Hitchin Grammar School so the business was doing well enough to be able to send them there.

By the 1891 census Thomas George had married Harriett (born Weymouth!)  and was living at Island House which may have been rebuilt/refurbished for in 1880 Thomas G’s sister Emily had married Thomas Elmes of the Elmes family of Coleswood House – another grocery family – and her father-in-law, Thomas Elmes bought the block of land just further along the High Street and round into Church Green and built the neighbouring range of shops (Elmes’ Folly) which are still there, as is Lincoln House – the more recent name for Island House. Was this new blood, in a new era, getting into serious advertising? 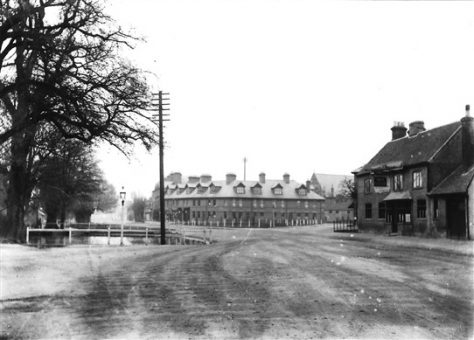 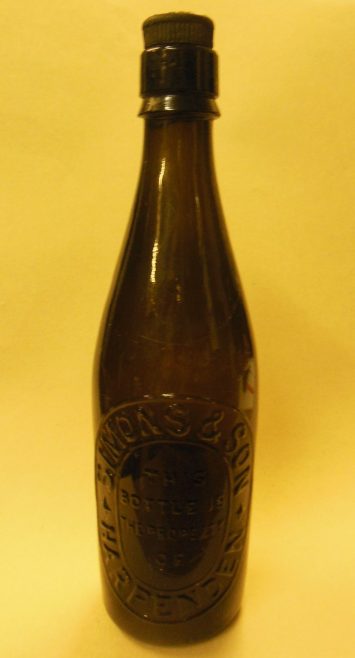 This Simons beer bottle had been stored in the larder in a house in Sauncey Avenue perhaps since 1928, until 90 years later it was donated to the Local History Society. Credit: R. Ross, 9 January 2016 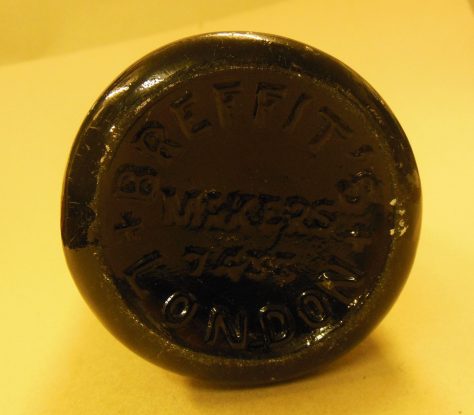 Base of Simon’s beer bottle 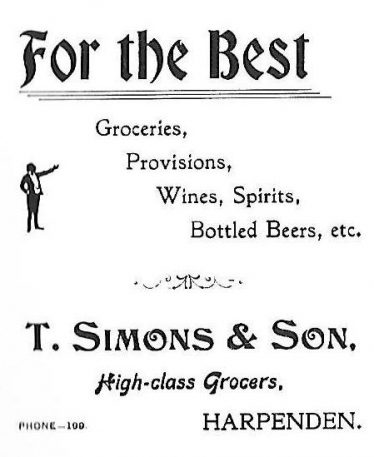 By 1924  all had changed. Island House had acquired a number – 34 High Street; Thomas G and his wife had moved to 35 Wordsworth Road and the shop had become a branch of Howard Roberts.  However the shop continued to trade at under the name of Simons and Son until 1958, then in 1960 giving way to Budgens  – the first self-service store on the High Street.

In The Harpenden Directory and Year Book of 1924 (so is this the new owner drumming up custom?) there is a footnote advertisement on the street-by-street section of the the directory, with the following:

Note:  The butchers at 92 High Street, Harpenden were members of the Wheathampstead family.

William Simons and the Wheathampstead Simons

A William Simons was baptised in 1738 at Ampthill in Bedfordshire.  When he came to Harpenden is not very clear but there is a William Simons in the poll book for 1790 and then in the Church Commissioners survey of 1799 it is recorded that he owned a ‘dwelling house. malting, yard etc.,’ on the west side of Harpenden Street.  [This site is now Rothamsted Court and shops on the west side of Church Green].  He also owned ‘a dwelling house and yard by Bowers’ – next to the “Cross Keys” – now 41 High Street and a ‘house, barn, stable yards’, known as Starvegut Hall which was sited on part of what became St George’s School grounds.

In 1794 William Simons ‘Marshalman* belonging to HM Household’ appears on the Jury List.  His will dated 1795 mentions his estate in Harpenden and also his property in Brompton Road London and he would appear to have had a large personal estate leaving ‘family silver purchased by me’  He was anxious for the welfare of the two sons of his brother James who had died in 1793 at Ampthill – William baptised 5.7.1781, and Robert baptised 5.7.1789.  William who later came to live in Harpenden as a surgeon was also his godson and inherited the bulk of his uncle William’s estate.  The rest was left to Robert when he attained the age of twentyone years.

William lived at the house next to the “Cross Keys” and he inherited Starvegut Hall.  He also owned a house ‘at the bottom of Bowers Hill’ (Sun Lane) where his sister Mary lived.  He had two daughters; Emma, baptised in 1823, and Ann, baptised in 1825 at Harpenden. 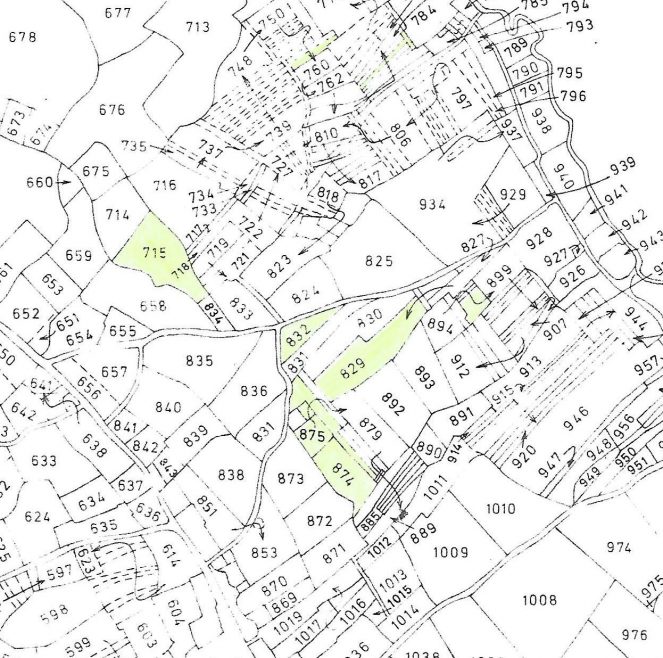 Robert’s first three children were all born in Harpenden (1819 – 1826).  He inherited the malting, yard, Church Farm (corner of Rothamsted Avenue/Church Green) and then moved to Abbots Langley where he farmed and was a butcher.  His second son George moved to Wheathampstead about 1844 where the family remained until 1986 having also served as butchers in Harpenden at 92 High Street for many years. 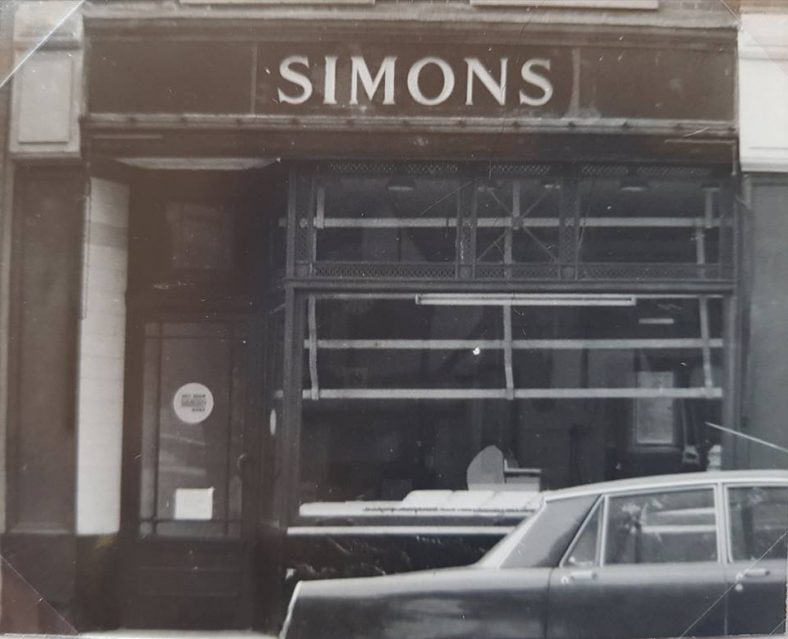 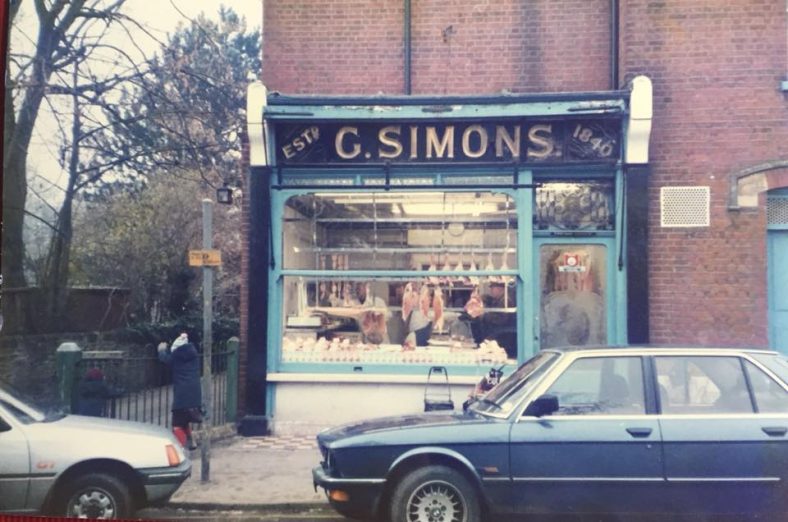 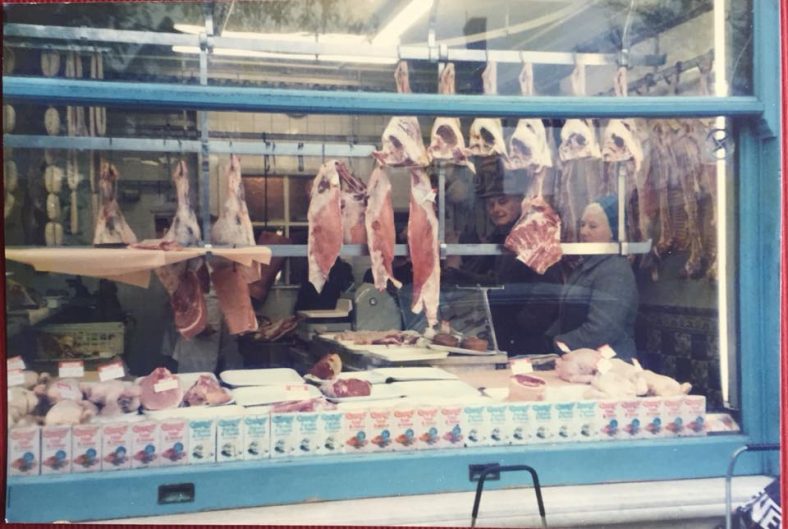 There is a memorial tablet in Harpenden Parish Church, on the south wall of the tower, which reads- ‘Mrs Cassandra Simons died April 1803 age 65 years, also William Simons who died 14th March 1807 age 69 years.’  In the churchyard are tombstones which record ‘Mary Simons, sister of the late Mr William Simons, Surgeon, died 15th September 1866 age 79’.  Also ‘Ann daughter of William and Rebecca Ann Simons, who died in September 1853, aged 28, Rebecca Ann 1854 aged 69 and William ‘husband and father of the above who lived in this village for 50 years died 12th May 1857 aged 77’

*The title ‘Marshalman derives from a rank with the Royal Household.  The Lord Steward, Earl Marshal presided in an ancient court whose jurisdiction extended for twelve miles around the King, this jurisdiction moving with the King on his travels so that members of the entourage would be subject to the King’s court rather than a local one.

By Andrew Morris, with additional information by Diana Parrott and Rosemary Ross