The Samwells Family in Harpenden

Five generations - The Samwells Family and Descendants in Harpenden during the 19th, 20th and 21st Centuries 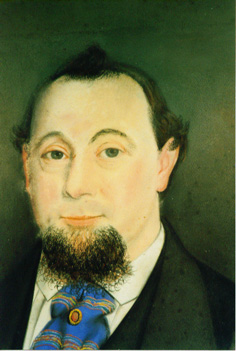 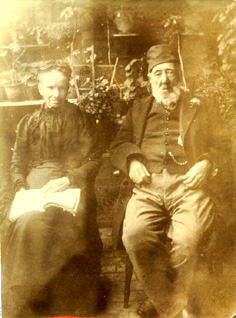 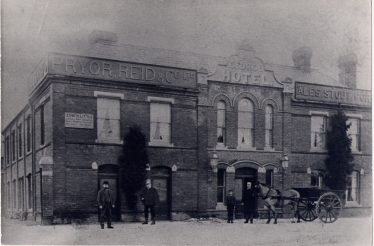 The First Generation of the SAMWELLS family in Harpenden.

The association of the Samwells family and their descendants with Harpenden commenced with the arrival of William Samwells, his wife and a number of his children sometime before 1881. The exact date is not certain to me, the first documented information I have regarding their residence in Harpenden is that contained in the 1881 census return which shows William as being a Licensed Victualler at the George Hotel, employing one man and a boy. Living with him, at that time were two of his surviving children and a domestic servant.

William, my great grandfather, was born circa 1821 in Houghton Regis, the son of William and Mary (née Thoroughgood) and married Ann Ironmonger, who was born in Luton, on the 27th September 1847 at St Mark’s Church, Myddleton Square, Islington. The census returns from 1851 and 1861 show William and a growing number of children living in the Islington area where he was a coach builder employing a small number of men and boys.

William’s father and grandfather, also both named William, had been shoe and boot makers or repairers in Houghton Regis and the reason for William’s departure to seek a living in London is unclear. Similarly, the reason for the move to become a publican in Harpenden is unknown, there being apparently no family connection with the village. William and Ann had a total of nine children the eldest and the final three all dying in either infancy or at comparatively early ages whilst the family lived in Islington.  By the time of the move to Harpenden some of the children were living independent lives, although my grandfather, Harry, later came to live with his parents. The following table shows the dates and places of birth and death of all of their nine children. The photograph here shows William and Ann in the back garden of their residence in Cowper Road.

Changes at The George 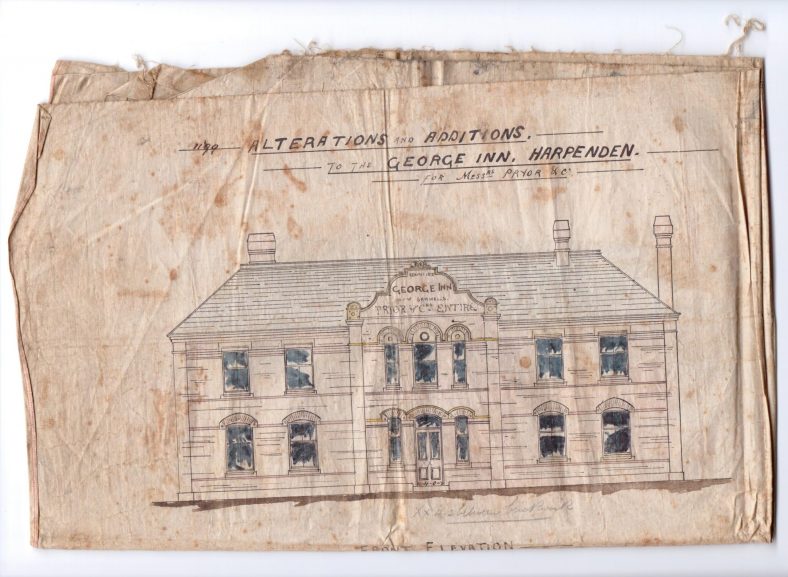 Architect’s drawing for alterations at The George Hotel

During the time that William and Ann were living and working at the George Hotel, several changes took place to the building. I have always assumed that the freehold of the building was held by a Brewery and this appears to be confirmed from a working drawing, an extract of which is illustrated alongside. On the original linen tracing it is quite clear that the alterations were on behalf of Pryor’s brewery. The name William Samwells can also be seen just under the name of the George. Working drawings show proposed interior changes to one of the staircases. Unfortunately these drawings are so flimsy that they are unsuitable for scanning and re-production in this article.

Presumably preparing for his retirement, William purchased land and properties in Cowper Road. On the 8th of August 1885, William paid £100 for three plots of land totalling 80 poles on the south west side of the road. 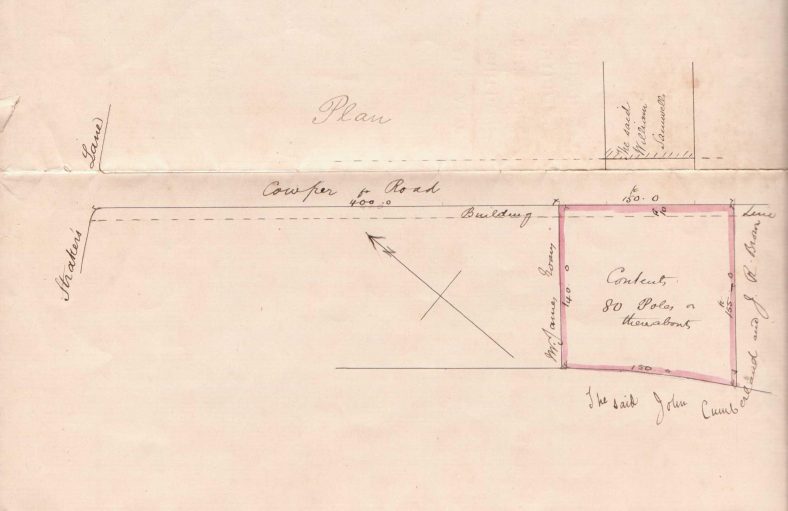 The pre-sale map issued by the auctioneers, Cumberland and Sons shows two pairs of semi-detached houses on the north east side of the road as being owned by William. Eventually William had pairs of detached houses built on the 80 pole plot, and by 1891 had moved from the George to live with his wife, a son and two grandchildren. 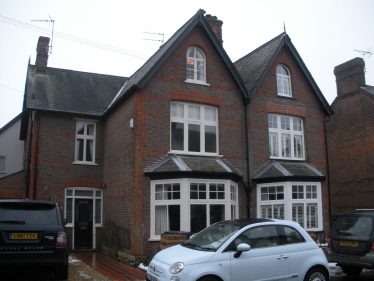 Their residence was the southernmost house named “Rose Villa”, later the home of Mr F.N. Gingell, Chairman of Harpenden U.D.C. William wrote two wills, the first making only a general reference to “his properties” but the second, for which probate was granted in November 1901, names them as “Rose Villa”, “The Cottage”, “Font Hill Villa”, “Lynton House”, “Adelaide Villa”, “Earls Villa”, “Crest Villa” and “Knebworth Villa”. The last four named being those on the northeast side of Cowper Road. His will also makes reference to leasehold property in City Road, Islington which he had previously used for his coach building business.

William died in October 1901, followed five years later in May 1906 by Ann. They are buried together in St Nicholas churchyard close to the footpath behind the old Read’s motor garage. Only three of William and Ann’s children survived with them into the 20th Century.

The Second and Third Generations of SAMWELLS in Harpenden

Although William and Ann had nine children, because of deaths before adulthood, only two of the original nine produced grandchildren who lived in, or had an association with, Harpenden. Those two were Thomas and my grandfather, Harry. The third surviving son, John Joseph, had made an independent life in various suburbs of London where he married and brought up two children.

My great uncle, Thomas Samwells, has proved to be of great interest to me as a consequence of researching my family history. He married three times, his first wife being Susannah Alice Mann whom he married in 1878. They had no children and she presumably enjoyed poor health as she was baptized as an adult at St Nicholas church in October 1878 and died at the age of 23 in March 1879. She was buried in St Nicholas churchyard. Thomas’ second wife was Rebecca Hebgin, the daughter of a farm bailiff working in Kirtlington, Oxfordshire. The wedding presumably took place in Kirtlington as the marriage is recorded at Bicester.  In 1881 Thomas and Rebecca were living at Northbrook Cottage in the village not far from the George hotel. In total Thomas and Rebecca had six children, five being born in Harpenden and the last, Dorothy who was born in Dunstable where the family had moved to some time after 1891. One possible reason could be that, when his father retired from the George hotel, the workshops to the rear of the hotel might not have been available to carry on his woodworking business. The dates and places of births and deaths of their children are shown in the next table.

The first five who were born in Harpenden lived the formative part of their childhood in the village and presumably attended one of the schools then available. Dorothy was born in Dunstable and the date establishes that the move of Thomas and family from Harpenden had been between 1891 and 1896. The five who were born in Harpenden all married elsewhere and only Elizabeth, who I always knew as “Aunt Lil”, frequently visited my mother from Luton where she had married and settled. Annie “Nance” married Francis “Frank” Turvey when he returned in 1910 after starting a farm in Canada. After their wedding they returned to Canada where their grandson and great grandson still farm the now much extended original homestead farm. Annie and Frank visited Harpenden twice, the first time in 1947, 37 years after leaving for Canada and the second time in 1953 when they were provided with seats in the Mall to view the Coronation procession. I have no recollection of regular visits by any of the remaining children of Thomas and Rebecca but imagine there must have been some casual meetings. 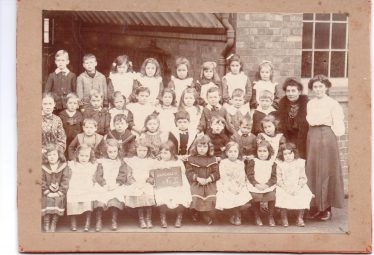 1904 class picture, Victoria Road School. Kitty Maude aged 5, third from the left in the back row.

My grandfather Harry married Sarah Jane Irons the daughter of a Harpenden baker in 1895 and their only child, Kitty Maude, my mother, was born at Rose Villa in Cowper Road on 21st August 1899. She often told me that her earliest memory was of the evening happenings in the village to celebrate the relief of Mafeking. The photograph alongside was taken at the old Victoria Road school circa 1904 when my mother, third from the left in the rear row would have been five. I believe that the lady second from the right in the middle row was Miss DAVIES who was the headmistress of the junior school in both my mother’s and my time. I can well remember her saying to me once “You cannot sing in tune and neither could your mother”. How many children these days have the benefits (or otherwise) of being taught by teachers who also educated their parents? 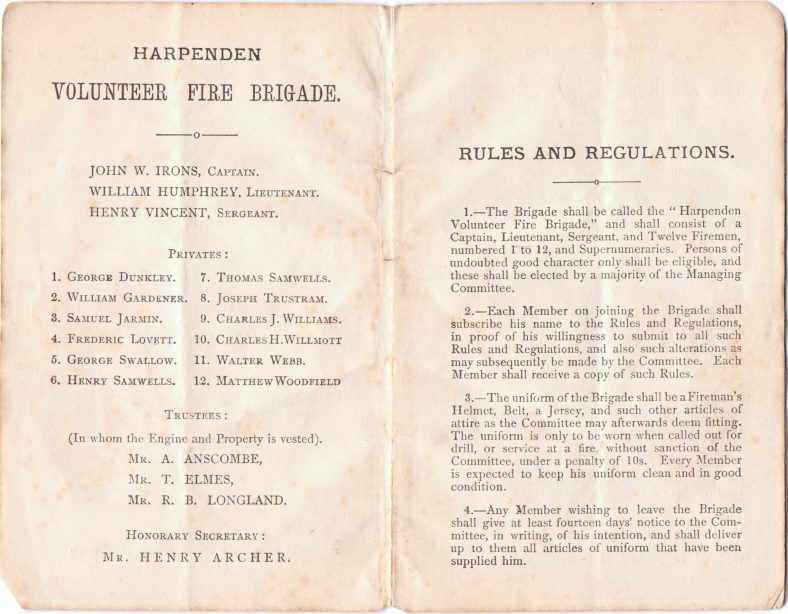 As can be seen from the illustration above, Tom and his brother Harry were members of the Harpenden Volunteer Fire Brigade. There is no date of publication for the booklet and so it is not clear exactly when they were members but a broad time frame can be established as being between 23rd March 1881 when the Brigade was constituted and February 1896 by which time Tom and his family had moved to Dunstable. Aside from the fact that many of the other members of the Brigade came from families with long association with Harpenden, there are two items of interest, the first that the Captain of the Brigade was the father-in-law of Harry. Whether Harry was impressed into the Brigade after his marriage or whether the fact that his Captain had an attractive daughter encouraged Harry to enlist is open to speculation. Also of interest is the severity of fine for the misuse of the uniform issued to members; a fine which is repeated later in the document in the event that a member should fail to attend a fire or even a drill when called upon so to do. Ten shillings would have represented a considerable portion of a week’s wages in those days. A lesser fine of five shillings was the penalty for “using improper or insubordinate language, being found drunk, practical joking or disorderly conduct at drills or on duty”.

After my mother left school she worked at George Kent in Luton during WW1 as an inspector of shell fuzes for naval guns. After the war she worked for some time at both Jefferies the printers in Vaughan Road and the Amalgamated Hose works in Batford.  Her father, Harry, continued to work as a painter and decorator in the village but her mother died at a comparatively early age in 1920.

My mother and father were married at St Michael’s church in St Albans on 13th July 1925. Some time between that date and December 1926 when I was born, my parents and Harry Samwells moved to Park Street, Luton where my mother was the proprietor of a sweet shop opposite the old bus garage. During the next three years there was no Samwells presence in Harpenden although my father commuted each day to work in the hairdressing saloon in Station Road owned by Arthur Fowle and later Clifford “Bill” Young. In September 1929, just after the death of Harry Samwells, who was buried in St Nicholas churchyard, my parents and I moved to Luton Road, Harpenden where we lived for many years. I moved from Harpenden in 1956 and when my mother died in December 1965 the last Samwells association with Harpenden during the 20th century came to an end.

The Fourth and Fifth Generations of SAMWELLS in Harpenden

By one of those coincidences of life, in 2006 Frances Brown, the great-great-granddaughter of William and Ann, came to live in Harpenden with her family, thereby bringing fourth and fifth generations of the patriarch and matriarch back to the village. The photograph of William is taken of an artist’s original which was bequeathed on his death to his son in law who married his eldest daughter Emma. This portrait has been handed down through the intervening generations and is now in the possession of Frances, thereby finally coming back to Harpenden after almost a century away.