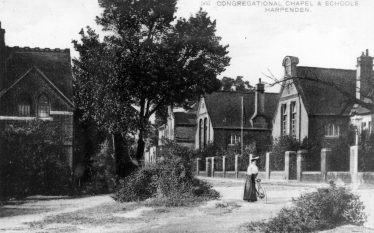 zoom
The Schools, with the Congregational Chapel on the left. Credit: LHS archives

Originally published in Harpenden First, 20 November 1997, to celebrate the centenary of the opening of the school.

In 1894 the people of Harpenden elected a school board to manage the village school, the last village in the county to do so.

One of its first tasks was to find a site for a new building; the old British School in Leyton Road (now Park Hall) had been provided by Sir John Bennet Lawes in 1850, and was now too small.

After a thorough survey of sites around the village, one was chosen at the corner of the newly built Victoria and Vaughan Roads, and bought for £725 from William Sparrow.  Arthur Anscombe was appointed as architect, and instructed to have an unclimbable iron fence built between the school and the railway.

The building was completed in 1896 and opened on 12th January 1897 with room for 140 boys at the northern end (now the Public Library), 120 girls at the southern end (now the Further Education Centre, [currently abandoned]) and 140 infants in the centre.

There was an outside toilet block in the playground, long since demolished.  The cookery and craft rooms bordering the railway were added in 1908.  In 1903, under a new Education Act, the County Council replaced the School Board.

Across the road, the new Congregational Church (now the United Reform Church) was built in 1897, to replace the old, and too small, building in Amenbury Lane.  The church members wanted to hold a bazaar in 1899 to raise funds towards their building costs.  The Church was not built until 1905, so they hired the Victoria Road school buildings for two days, Monday and Tuesday.  The Bazaar was opened by Sir John Bennet Lawes, and raised about £400.

The start of Evening Classes

On January 6th 1908, evening classes under the auspices of the County Council started at Victoria Road.  They were aimed at recent school leavers.  There were separate classes for boys and girls; the girls’ subjects were household management, cookery and needlework; the boys’ subjects were drawing, woodwork, elementary science.  There was a mixed class on music which ran for half an hour on two evenings a week.  The first year’s classes were attended by 50 people, 25 boys and 25 girls.

After about 30 years the buildings were felt to no longer suitable, and a plot of land for a new school was bought at Manland in the late 1920’s, but it was another ten years before the schools were built.

They were ready to open in September 1939, but the declaration of war delayed the opening for several days.  There was some concern about lack of air raid shelter there, and the buildings had large areas of glass windows.

New uses when the school moved to Manland in 1939

The Victoria Road buildings did not remain empty.  The northern end was immediately converted into a First Aid Post manned continuously, day and night, throughout the war by Red Cross members.

There were two wards, a doctor’s office, a canteen and a gas cleansing area with shower and a separate entrance.  There was access for ambulances from the playground.  The centre was well used, and dealt with many small day-to-day injuries, as well as its members assisting with street and home accidents.

For the first three days in September the buildings were used as an evacuee reception centre when over 2,000 people arrived from the London area.  Several schools were evacuated to Harpenden as complete units.  The Medburn School from Somerstown in London was accommodated at the southern end of the Victoria Road Buildings, and remained there until 1945.

In May 1943 there was a fire in one of the classrooms.  It started in a cupboard containing school books, and was discovered by a member of the Home Guard, who held regular meetings at the school.  He called the Fire Brigade, who quickly had the fire under control, although the cupboard and books were completely destroyed.

In the early years of the war the child population of Harpenden had more than doubled.  During the Christmas holidays in 1940, a play centre was established at the school, to give the children somewhere to go and something to do; there were rooms provided for games and for reading and writing.  There were adult supervisors and over a hundred children attended daily.  The scheme was successful and continued during the winter months on Saturday mornings and evenings, and two mid-week evenings as well.

At the end of the war the buildings were empty for a while.  Evening Classes had been held at Manland since 1939, the Medburn school had returned to London, and the First Aid Centre had closed down.

The library moves in

The library moved into its end in 1947, from its room in Harpenden Hall.  New furniture was unobtainable at this time and the library had a rather “make do and mend” look about it until 1951 when it was completely refitted.

In the early 1960s Manland School had more children than space, and an overflow class came back to Victoria Road, using a room in the Further Education Centre for some years.  A large fence was built across the playground, keeping their half free of vehicles.

In 1964 the library was in desperate need of space.  The population of Harpenden had grown, and the use made of the library had grown even more.  An extension was built across the playground, and opened in 1965; the main entrance was moved from Victoria Road to Vaughan Road, where it was possible to have access without steps.

The buildings are now about to celebrate their centenary; the library, which has been in existence for 71 years, has spent 50 of them at Victoria Road.

Eric Brandreth would have been saddened to know of the closure of the Victoria/Vaughan Road library, with its dedicated Local Studies Room, in 2013, when Harpenden Library moved to the Lower High Street (ed).