Glimpse of a Victorian villa 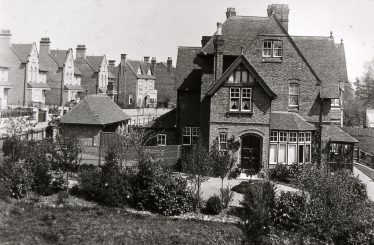 zoom
Park View House, on west side (even numbsers) of Milton Road, with row of detached houses on the east
LHS archive, cat.no. B 3.98 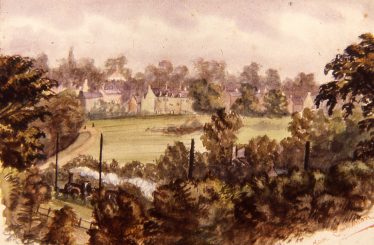 zoom
View from Park View House in Milton Road across the common in the 1890s by Kate Richardson.
LHS archive, cat.no. B 3.99

Two photographs, copied as slides in ‘Captain Bond’s Old Harpenden’ collection in our archives, are captioned as Park View House, and view from Park View House respectively (though identifying the buildings across the common, beyond the railway, is problematic).

This was one of first houses to be built on the Park View estate, which was planned in 1884 by John Robert Brown, in conjunction with the estate agent and auctioneer John Cumberland, both of Luton.  It was built for William Joseph Richardson, a friend of John Brown, who lived there with his wife and two daughters. His younger daughter Kate was an amateur artist, whose small known output includes two views from the gardens of Park View. Kelly’s directories do not list this building after 1924, when she was living there after her parents’ deaths. It would appear that it remained vacant until demolished and Milton Court built by 1958.