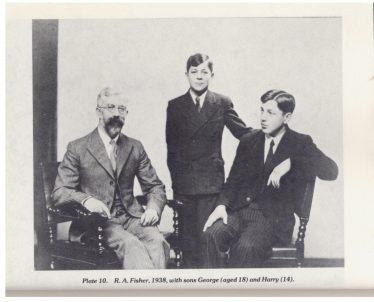 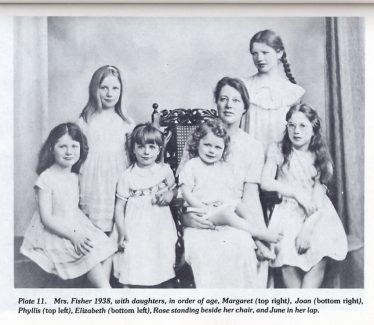 Stakers Court, Milton Road, is on the site of Milton Lodge (3 Milton Road) – the home of Ronald Fisher and family from 1922-1943.  It was here that Fisher worked out the details of the mathematics of evolution, the long awaited synthesis of Darwin’s theory of evolution by natural selection, and Mendel’s gene theory.  The story is told by his daughter, Joan Fisher Box, in her biography “R.A. Fisher, The Life of a Scientist” (Wiley, 1978).

Fisher was appointed in 1919 as a statistician to work at Rothamsted to examine the accumulated data on field experiments started in 1843.  He was a brilliant mathematician and he had already published papers on statistics and on genetics. The Director, Sir John Russell, allowed him freedom to continue his varied interests alongside his direct work for Rothamsted scientists.  The Fishers lived at first in Markyate, and he commuted to Rothamsted on horseback.  As the family grew they needed somewhere larger, and they moved to Milton Lodge, on Oct 7th 1922.  They had nine children, although one died tragically as a baby in an accident on a beach. His son, Harry Fisher, continued to live in Harpenden, in Piggottshill Lane.

“The household must have seemed shockingly unconventional to the residents,” writes his daughter, “for Harpenden was a small town dominated by middle-class inhabitants, some retired, others with comfortable and dignified daily work in London or nearby Luton.  Milton Road was the hard core of Victorian Harpenden, large detached houses with gardeners tending well-kept gardens and nannies in charge of decorous children.  In contrast, soon the neighbours became aware of a noisy group of young Fishers, barefoot in summer, whose games might spread from the unkempt front garden to the pavement and gutter outside.”

In a later incident she recalled how once the children all climbed out onto the roof, and sat straddling the ridge and waving to the horrified passers by.

Fisher filled his back garden with sheds for his chickens and goats.  He was shocked to learn that bylaws forbade the keeping of pigs in this exclusive neighbourhood, but they did not mention goats.  From a pair of mice acquired at an early date he conducted breeding experiments, and by 1933 there were 70 cages of descendants in the attic, which were moved to University College, London when he was appointed Professor of Genetics.  He also experimented with rabbits and with snails, and used statistical methods to identify the arrangement of genes on chromosomes, an early version of today’s genetic mapping.

In 1942 his neighbour, Dr C.B.Williams, head of the entomology department, asked his advice about the curious patterns found in records of numbers of moths caught in light traps, and in Malayan butterflies.  From this Fisher worked out a fundamental law relating the numbers of species, common or rare, likely to be found in a sample of given size, and this is the basis of modern ecological research.

It is interesting to speculate how much Harpenden has contributed to knowledge behind its quiet front doors.