Home of Jesse Catton - and the growth of the Ridge estate 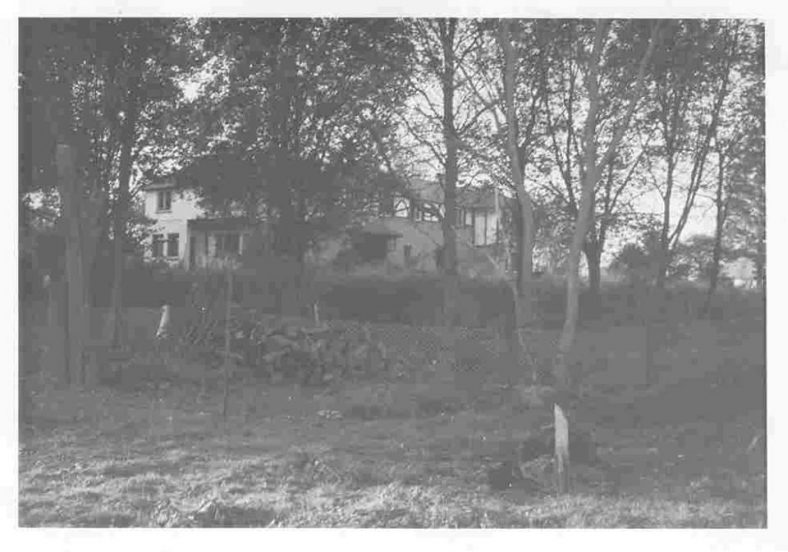 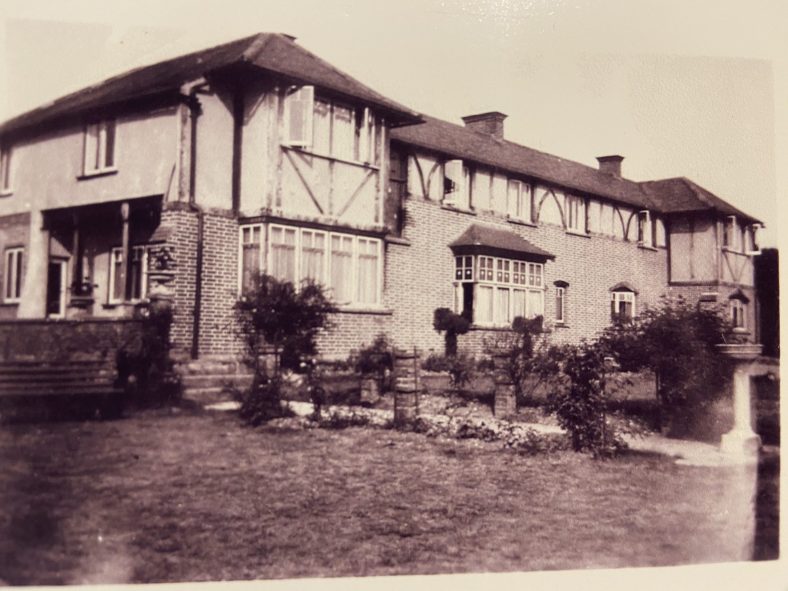 The Ridge – Reproduced by kind permission of Charles Catton

On 11 January 2018 Nigel Emson posted a photo of Ridge House on the Old Harpenden Facebook page. It was taken in October 1963 through the woodland, before the house burnt down. Nigel apologised for the poor quality of the photo, and we hope clearer photos may come to light.

Ridge House had been the home of Jesse Catton, who owned land to the north-west of Roundwood Lane, and west of Luton Road up to Kinsbourne Green subsequently developed as the Ridge Estate. It is first recorded in Kelly’s Directory for 1922, but in 1952 only Mrs Catton was living there.  By 1956 Fraser L Welch lived at Ridge House and was still there in 1960. Kelly’s Directory for 1962 shows Ridge House in brackets, listed under Ridge Avenue rather than Luton Road, and no-one resident. Interestingly the driveway to the house has survived, as can be seen on the maps below. 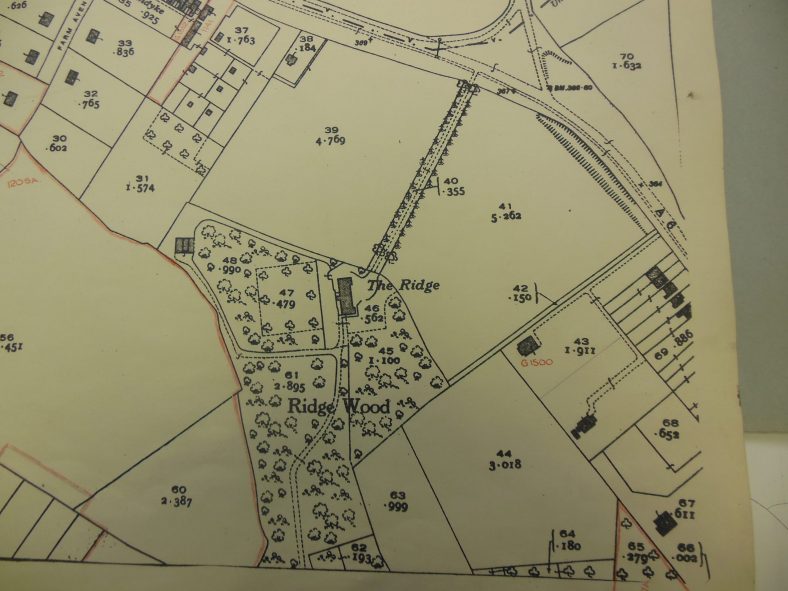 A number of people have recorded their memories of the house and woods, from when they moved into houses in the newly built Ridge Avenue, Ridgewood Drive and Wells Close. Belinda Hill recalls: “I remember that house (Ridge House) when I lived in Wood End Hill; I remember china on a dresser, and all the bluebells surrounding the house. As children, we all thought it was a spooky place.”  David Stainer added “I lived in Wells Close up till the mid 1980s. I spent a lot of my childhood playing in the woods there”. There had been a building housing the oil tank for the whole road. Later that side of the wood was bought up and fenced off.

Discussion of the estate continued with information about the building phases: 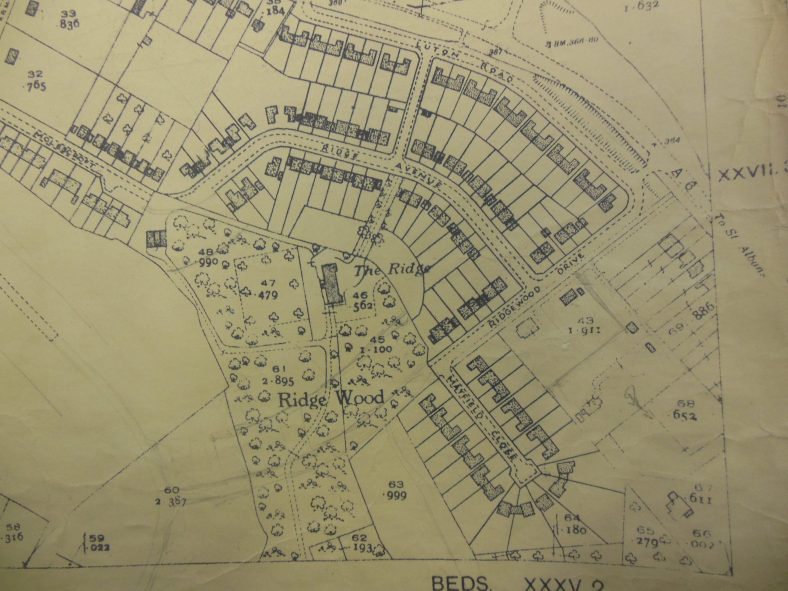 The first phase from about 1956 (see Comment below) included the stretch of Luton Road set back between Ridgewood Drive and Farm Avenue – numbers. 263 to 277 by 1956 and 279 to 303 by 1958. Also Ridge Avenue and Mayfield Close were listed in 1956 but did not have residents until 1958. and the lower end of Ridgewood Drive up to no. 20, which was built by Pearce and Barker. According to Caleb Pearce, Mayfield Close was named “after a delightful Sussex village where my mother spent her childhood”. 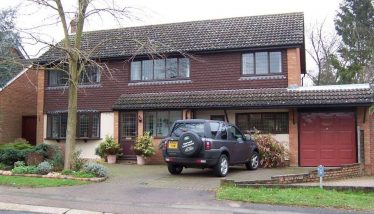 The second phase of Ridgewood Drive, from 22 to 40 was built by Leonard Green, a local builder who lived near Topstreet Way (but for whom there is no record in Kelly’s directories). He also built Wells Close, and Pamela Lawrence has contributed a comment to explain how this name was chosen. “The houses on Wells Close were built by Leonard Green who was a client of the firm I worked for in the 1960’s. He wasn’t sure what to call the development and suggested we (staff members) put their names in a hat and he would pick one out. My dear friend Barbara Wells, a secretary at the firm, had her name pulled out, hence “Wells Close”.

Phase 3 was from no.38/39 Ridgewood Drive to Tuffnells Way. Before these were built, a model railway was up on the left of Ridgewood Drive. This has been described as being in the bank alongside Ridgewood Drive, presumably at the end of the garden of 40 Roundwood Lane, which had been vacant in the mid 1960s. It was occupied from 1967 by Keith Staines, and no.43 Ridgewood Drive was built by 1968, and no. 41 by 1969. This does not seem to have a direct connection with Brambleton Model Railway Club which is associated with a site in Roundwood Park.

Our house (no.42) was built by Jarvis, as were Ridgewood Drive nos 38 upwards on our side and 39 upwards opposite. Our former neighbours at no.40 told us they moved in when the house was new in, I think, 1968. But ours followed some two years later, the explanation for the delay being that our plot was used by Jarvis for storing all its materials, tools etc during the building of the houses in Tuffnells Way as far along as Farm Avenue. That tends to be confirmed by the amount of builder’s rubble turned up, over the last 44 years, by my wife’s green-fingered horticultural digging.

Jarvis houses are readily identifiable by the distinctive chimneys, the topmost part of which is ‘recessed in’ revealing grey (I guess heatproof) bricks. The first occupant of our house was George Gray and his wife Norah. (She is still alive aged well over 90 and living in a care home in King Harry Lane, St Albans.) Mr Gray worked for Jarvis as some kind of manager, probably overseeing this development. The second owners were the Grangers. We moved in on April 30 1974 (after 13 years in Wroxham Way).

We are on the corner, and there was evidently some debate about whether the house should be built facing on to Tuffnells Way or Ridgewood Drive. And while they were dithering on the matter, the house numbers in Tuffnells Way had to be allocated, with ours as a possible no. 8. But because the ‘90deg’ decision went the other way, there has never been a no. 8 Tuffnells Way. The boundary between our back garden and no.10 Tuffnells was/is an ancient field boundary, marked with old hawthorn trees. No.10 Tuffnells Way was occupied initially – and indeed until after we moved in here – by Douglas Peters, who in due course became MD of Jarvis, [and whose son Mike Peters (am I right in thinking that he is not related? ed) holds that position today.] Perhaps the Jarvis archives would throw more light on the housing development hereabouts.

I moved in to 13 Molescroft in 1957, one of the six pretty little Dutch-style houses, costing £2450, opposite the council houses. In those days it was a cul-de-sac accessed from Farm Avenue – itself also a cul-de-sac. The other end finished at the north-western side of the Ridge Wood, from which it was separated by a low chestnut paling fence.

The detached houses going up the hill at the end of Ridge Avenue – which at that time ended at the north-eastern side of the wood – match those on Luton Road, obviously the same builder, Pearce & Barker I believe. When the wood was developed Ridge Avenue and Molescroft were joined. The bungalows on the new stretch of road were built at approximately the same time as Wells Close (1966).