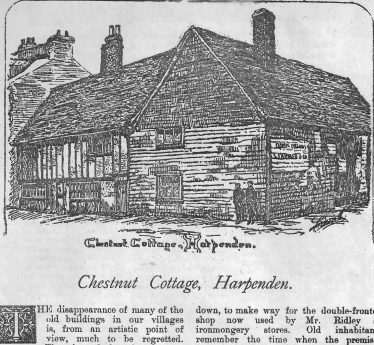 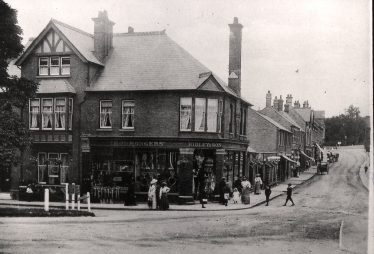 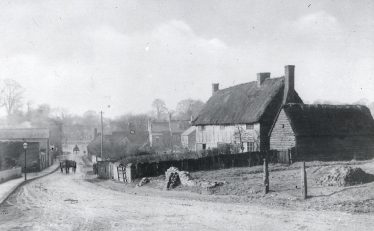 zoom
Perhaps the writer was thinking of these cottages ,now the corner of Victoria Road
LHS archives, cat.no. B 2.45

A cutting from Hertfordshire Illustrated Review, volume 2, 1894, has recently come to light as we sort through files of papers bequeathed to the Society by the late Eric Brandreth. Nostalgia at the loss of picturesque buildings is not new!

The disappearance of many of our old buildings in our villages is, from an artistic point of view, much to be regretted. They formed charming features in the rural landscape, but unfortunately they were as a rule most inconveniently designed, and their sanitary arrangements sometimes left much to be desired. The utilitarian broom therefore often makes a clean sweep of them and in their places modern and more commodious, if less picturesque, structures arise. Harpenden has always been pre-eminently a delightful old-world country village, but here too, the spirit of modern improvements has been at work for some years past. The cottage of which an illustration is given was situated at the corner of what used to be called Stakers’ Lane, but which has now received the more modern appellation of Station Road. A few months ago “Chestnut Cottage” was pulled down to make way for the double-fronted shop now used by Mr Ridley as ironmongery stores. Old inhabitants remember the time when the premises formed the house and homestead of “Home Farm”, in connection with which a butcher’s business was carried on by an occupant named Freeman, and which subsequently passed into the hands of Mr Henry Willmot. It formed part of what was called the Packe-and-Pimm Estate, much of which is now built upon. When it became a private residence it was christened “Chestnut Cottage”, in compliment, probably, to the chestnut tree which stands on the green in front of it, and which is always the first tree in the village to break into leaf. There are some other old cottages in Station Road which are worth attention, as they will probably soon share the fate of “Chestnut Cottage”.