The History behind Numbers 24 and 26 Station Road

Taken from documents in LHS Archives donated by The Anscombe Family 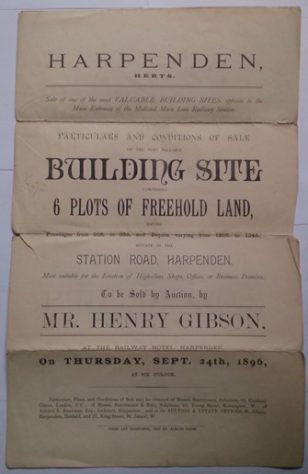 A public auction of “a most valuable freehold building site comprising 6 plots opposite to the entrance of the Midland Main Line Railway Station” was held by Henry Gibson on 24th September 1896 at The Railway Hotel (The Harpenden Arms since the 1960s), as directed by the Trustees of the Congregational Church Building Committee. This valuable freehold building site was stated “to be suitable for the erection of high-class Shops and Offices” according to the press notice.

Part of a tithe map (Plan 1) shows these plots were on land which Mrs Elizabeth Whittingstall Healey (proprietess of Healey’s brewery) had purchased for £3170 at the Packe & Pym Estate sale in 1882. A note on the map identifies another plot on the land – No. 1028 (coloured yellow) – as being leased to Susan (Polly) Nott “for 21 years from June 24 1882 (to 1903) if she should live so long, at £35 p.a.”  Polly Nott’s cottage was one of a number of cottages which were demolished in the 1890’s to make way for a new road – Vaughan Road. Another building demolished in the 1890s was Bristle Hall which was on the site of the 6 plots of land for auction (coloured pink on the plan 2). Mrs Elizabeth Whittingstall Healey died on 28th January 1892 and her three daughters Elizabeth, Constance May and Augusta Annie were her beneficiaries. In a Declaration dated 17th February 1893 Hannah Nott, widow, stated she had “for forty three years and upwards resided …..  in one of the cottages upon the land” as shown on a plan of land they had  inherited. Together with Thomas Clutterbuck (from whom Mrs Whittingstall Healey had borrowed money to purchase three cottages) and Sampson John Rumball, a land surveyor and auctioneer from St Albans, Mrs Whittingstall Healey’s daughters sold lots numbered 7-11 Station Road to Allen Anscombe, (the founder of Anscombes Department Store), for £730 on 13th March 1893. Mr Anscombe bought two plots of land at Henry Gibson’s auction at The Railway Hotel – lots numbered 2 and 3 (later to become numbers 24 and 26 Station Road).  These are highlighted in a plan which interestingly also shows “Vaughan” Road, rather than “Victoria” Road as being nearest to the railway station. Allen subsequently sold lots 2 and 3 to his brother Ernest – a surveyor and partner of the St John’s Wood firm “Anscombe and Ringland, Auctioneers, Estate Agents and Surveyors”, for £220, according to a Memorandum  of Agreement  dated 29th October 1898. 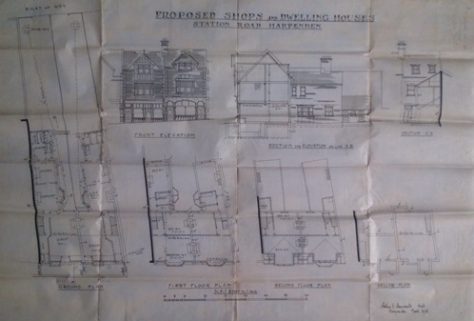 Another Anscombe brother – Arthur – an architect at Vaughan Road designed the shops and houses on the two plots for Ernest. Estimates from building firms for erecting the buildings according to Arthur’s plans ranged £1533 – £2178, with the highest estimate coming from Phillips & Blake, Builders, Contractors, Decorators & Undertakers, in Vaughan Road. A bill from Arthur for preparing the sketches, working diagrams, specifications and details for the new premises, superintending the work, selecting fittings, advertising, correspondence and negotiations with applicants, amounted to £5000 for the period November 1905 to February 1907. One of his advertisements for the “Two newly- erected shops and dwelling houses in Station Road” gives details of their dimensions and rent. Work on the premises was completed in 1906 for number 26 and in 1907 for number 24 Station Road.

Ernest, then his widow Mabel, and later their son Ernest Richard let both premises by a series of lease agreements, new leases, and lease renewal or lease re-assignment to a number of tenants over the years. At number 24 Station Road, Ernest‘s first tenant in 1907 until 1920 was Charles Somerset Booth who paid rent of £60 p.a. for the first 3 years. The business was an art needlework depot run by Mrs R. Booth. From 1911 -1915 it appears from Kelly’s directory that there was also a surgeon-dentist – George Wardill, then Harold Wardill – presumably working from the upstairs of the building.

Curiously, for much of the time the premises were occupied by hairdressing businesses, beginning with tenant Arthur Fowle in 1920, William Young in 1929-1969 and Paul Jarratt 1970-1977, with trade names including Maison Langley, Youngs, Jane Hair Fashions, and Salon XXIV. The sign for Young’s hairdressers was exposed in 2005 during re-fitting. Credit: LJF – LHS 9594 An advertisement from 1977 shows the premises available for let on a new lease.  Unwins Ltd (Off- Licence), the next tenants, saw an increase in rent from £3125 to £9750 during their twenty years’ occupancy. The premises, presently let to the Dogs Trust Charity, are currently closed due to fire damage in early 2018. The premises were let on a new lease to Rollings Wine Shop in 2012. 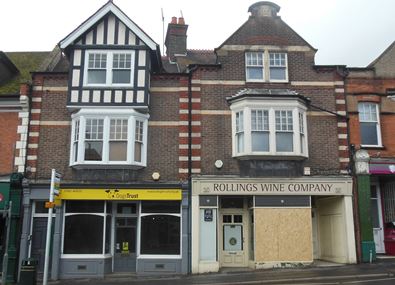