Sale of land for development on the St Nicholas Estate 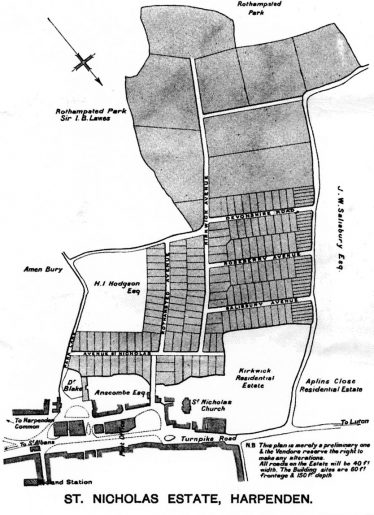 The story of “The Avenues” is the story of the sale of the land of various farms in the area bounded by Amenbury Lane, Park Avenue, Morton End Lane and Luton Road. The first was the fairly small Morton End Farm, in 1870 – not so long after the railway to London was built. The Ecclesiastical Commissioners also sold fields – for instance Churchwick Close. The house which was the core of what is now the Gleneagles Hotel – Kirkwick – was one result.

Much of the land belonged in the seventeenth century to Godman Jenkyn of Harpenden Hall, and was inherited by his two nieces. The first share passed to an Elizabeth Kingsley, who married William Pym, and then to his brother Frances Pym. The second share passed to a Kitty Hort who married Charles William Packe. The land (about 1000) acres became therefore ‘ the Packe and Pym estate’, comprising New Farm, Cooters End Farm Westfield and Manland commons, Upper and Lower Topstreet farms, mostly to the east of the ‘turnpike’ – Harpenden High Street (also sometimes referred to as London Road) and Luton Road.

The land was sold at auction in 1882, when the sale catalogue described the land as “affording choice building site within a convenient distance of London”. Much was bought by builders and property speculators. Henry Steers of Luton bought 96 acres near the church, formerly Church Farm (Church Farm House is now Church Farm Cottage). He bought at £57 per acre, and built on part. The Packe and Pym estate also owned and sold the smaller Townsend Farm.

Land near the Harpenden Central station on the Midland line (opened in 1868) was the first to be developed. The Park View Estate (Milton Road, with Shakespeare and Spencer Road projected) was first advertised in 1883, and large plots were offered on the south-west side of Milton Road during 1884 and 1885.

Then in 1895 Henry Steers auctioned plots on the St Nicholas Estate in two stages – May and November. The roads were already laid out and the plots had frontages of 50 to 60 feet and depths of about 150 feet. The sale catalogue specified the types of house to be built – detached at £400 or £500, or semi-detached at £700 the pair. A typical house consisted of cellar, entrance hall, cloakroom, three living rooms, kitchen, scullery, larder, coal place and WC, four bedrooms, bathroom, and an attic bedroom and boxroom.

About 400 plots sold slowly during 1895-97, forming the St Nicholas Estate. Amenbury Estate followed in 1905 and further portions of the St Nicholas Estate in 1906. The sales literature boasts: “Harpenden has during the past few years become a favourite residential place for professional and businessmen whose vocations are in London, Luton and St Albans, and probably nowhere else in so short a distance from the Metropolis is there a spot so absolutely rural, picturesque and healthy and the rates so low as 3 shillings”. [For an account of the auction, see Arthur Anscombe’s letter below *.]

A change in the organisation of the building industry took place in the middle of the nineteenth century. Previously the individual craftsmen were hired separately. The modern builder, who either employed or contracted the craftsmen, evolved around 1870. In Harpenden this is visible through the census and trade directories.

Henry Salisbury moved to Harpenden from Northamptonshire in 1862 and set up an ironmongery and builders yard at his home in Leyton Road. By the 1871 census, at 32, he is a master plumber, glazier and painter employing six men. In 1892 he advertised as a plumber, hot water and gas engineer, house painter etc.  He and his wife Susan had five sons and six daughters, brought up on his business premises at 16 Leyton Road (now Inn on the Green). He and his half-brother James Wright Salisbury invested in building land through the 1880s, and Henry built a number of houses in Station Road on the margins of Manland Common. He moved to 1 Arden Grove, which he had developed in the 1890s. He died in 1923 but the family firm continued the business for another half century as Kingston House.

I attended the sale of the Nicholas Estate land on Friday – there was a good room full at the “George”.  The first 40 lots sold at prices varying from 35 shillings to 45 shillings per foot frontage with an average depth of about 150 feet.  These confirmed both sides of the new road (Ave St Nicholas) running parallel with the back of our garden and those on the road from the Church Green  (Rothamsted Ave) up to it.  The remainder 15 plots were either withdrawn or bought in.

Father bought Robinson’s house (Church Farm Cottage) for £510 which I think is fairly reasonable.  He also bought two plots opposite those previously bought at 45 shillings and Allen bought a corner plot next to Chapel Lane at 41 shillings.  The other plots were bought by Piggott, Irons, Little, Weston, Pointer and others whose names I did not get.

Father has had an offer of £20 for Robinson’s house from Dr Blake but I don’t think he will accept it.  Must dry up now to catch the post.

(From the material researched by Margaret Scott for the Open Day 3 June 1995, and first published in Newsletter 68, September 1995.)

By Margaret Scott (1995) and later additions