Geology and Soils of the Harpenden District

The southern slopes of the Chiltern Hills 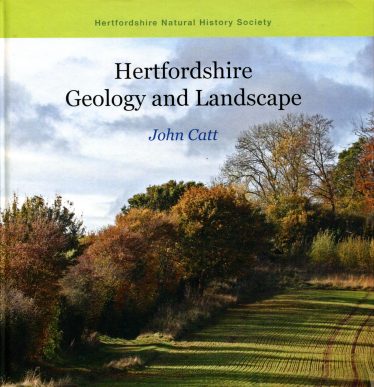 The Harpenden district is underlain by several hundred feet of Chalk.  This fairly soft white limestone is composed almost entirely of calcium carbonate; it forms the Chiltern Hills and extends beneath London, reappearing to the south to form the North and South Downs.  This rock accumulated on the sea floor about 70-80 million years ago, but about 60-70 million years ago was pushed above sea level to form the land out of which southern and eastern England have since been carved.  It has been quarried locally for agricultural use at several places, for example Redbournbury, where the fossil shells of sea-urchins and bivalves can be found; these animals lived in the sea in which the Chalk accumulated.

However, none of the soils in and around Harpenden was formed directly from the Chalk, because thin, more recent deposits veneer it.  Some of these formed originally above the Chalk as mudflats bordering a sea to the south-east, but have subsequently been disturbed and mixed with a little material from the Chalk beneath, in particular with the nodules of almost pure silica (flint), which occur in bands in upper layers of the Chalk.  These reddish brown flinty clays occur mainly on flat plateau surfaces between the Harpenden valley and the Ver valley at Redbourn.  They are up to 40 feet thick, and are covered by 1 foot or more of silt, which was deposited by the wind during the last ice age, between 25,000 and 10,000 years ago.  This silt is an important feature of the plateau soils, giving them a loamy topsoil horizon, without which they would be heavy, unworkable clay to the surface.  In places, the silt is thicker than 1 foot, so that both subsoil and topsoil are loamy.

The other soil-forming deposits veneering the Chalk of the Harpenden area occur in valleys, such as the Harpenden valley, which have been cut through the flinty clays into the Chalk.  These valleys are typically asymmetrical, with their west-facing sides steeper than the east-facing slopes.  Towards the valley floor below the steeper slopes, a gravelly deposit of broken chalk and flint occurs; this accumulated in cold conditions, for example during the last ice age, when the chalk was shattered by frost, and sludged down the valley sides or was carried along the valley floors by torrential summer streams.  On the less steep valley sides these gravels contain layers of the windblown silt, and chalk fragments have been dissolved from the upper layers to give acid soils of rather variable texture and stoniness.

In parts of the Harpenden and Ver valleys, and in the Gade valley above Hemel Hempstead, the central part of the valley floor is occupied by a narrow strip of coarse flint gravel.  At Kinsbourne Green this is more than 15 feet thick, and at Redbourn, where it forms a low terrace just above present stream level at the confluence of several dry valleys, it is more than 9 feet thick.  The gravel was formerly worked on the old pits beside Southdown Road, Harpenden, at Cross Farm, and on Nomansland.