Almost unique to our area 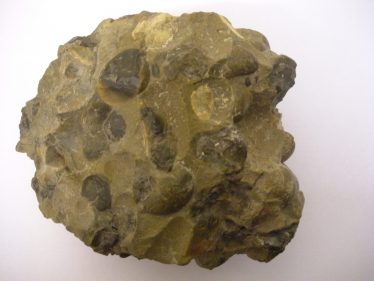 zoom
A sample found in Harpenden, about 10-12cm in diameter - in our Museum collection
LHS archives, Rosemary Ross 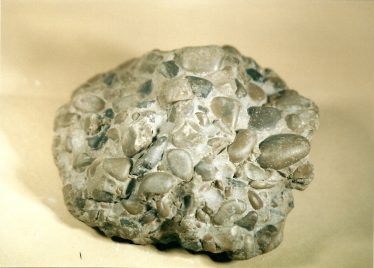 It may be difficult for us in Hertfordshire to believe, but puddingstone is one of the world’s rarest rocks.  It occurs in pieces which vary from a few inches to several feet across.

Puddingstone is a conglomerate of small pebbles bonded together by silicon to form solid rock.  When broken, it shows a cross section of pebbles which give it the plum-pudding appearance which accounts for its name.  All puddingstone is several million years old and its formation began when small, mainly flint, pebbles were deposited in river beds and then later covered by London clay.  This puddingstone mixture was subsequently compressed and bonded together during the Ice Age, becoming strong enough to resist crushing.

When the ice melted, large pieces of this rock were tumbled by the flood water to produce the rounded blocks that are still underneath the local fields today. (But see Jane Tubb’s comment below)

Created by the precise conditions prevailing locally during the last Ice Age, nearly all the puddingstone in the world is found in Hertfordshire and most of it lies in the Gade and Bulbourne valleys.  Puddingstone has an exceptionally hard surface and its earliest known application was as a Stone Age Quern, which was a primitive mill stone used for grinding corn.  Stone Age culture also used circles of puddingstone in its ritual worship and, because of the deliberate incorporation of some pagan beliefs into the Christian faith by Pope Gregory’s missionaries  (circa AD 601), it is still possible to find some puddingstone built into the walls of many local churches [including the tower of St Nicholas, Harpenden].  Although in some ways an ideal material due to its strength, puddingstone has never been widely used as a building material, simply because of its scarce supply.  However there are one or two rare buildings in Hertfordshire built entirely of puddingstone.  A small structure in Radlett was unfortunately demolished in the 1970’s but one house survives on the Westbrook Hay estate; the old Ice House at Ashridge is also built entirely of puddingstone [ed. but see Comments below].

This local rock was sometimes used for grave markers and coffin stones and Great Gaddesden churchyard is a good example of this, with some large puddingstone boulders still marking graves.  Local superstitions surrounding puddingstone are many and various; in some cases the rock was put on top of the coffin to protect the deceased as many local people believed puddingstone warded off evil spirits and could bring good luck.  For this reason, it is not unusual to see pieces of the rock laid by cottage doors or gate posts.

These local practices have given rise to puddingstone’s alternative names of Angel stone, Hagstone or Witchstone.  Although its exterior surface is similar to concrete and dull, when sliced through puddingstone can be very attractive,  Consequently it was used for jewellery, ornaments and some small table tops during Victorian times, when it was discovered that puddingstone could take a very high polish, which showed off the spectacular variety of colours in its constituent pebbles.