You are here: HomenextHarpenden HistorynextTopics - from Archaeology to WartimenextArchives and local history resourcesnextAccounts of the Surveyors of the Highways for the Parish of Harpenden

Notes on documents held at Hertfordshire Archives and Local Studies 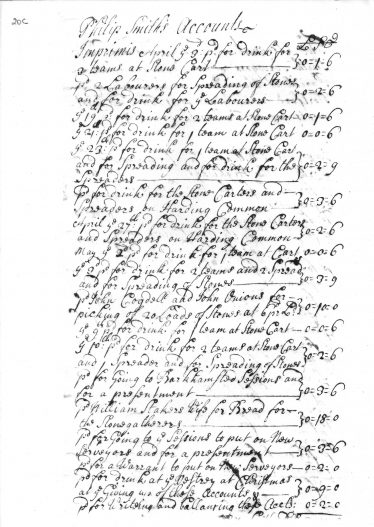 The original documents were photocopied and transcribed by hand by Eileen Haines in the 1970s. The photocopies and transcripts are in the Society’s archives – BF 4A.27

List of Accounts for the years noted below. Numbered as noted.

The accounts consist of lists of payments made for collecting, carting and spreading stones on the highways (children received 2d a day for collecting stones) and for wages and ‘drink’ (beer) for those employed in the work. Some of the recipients are named. Other repairs were made to bridges and drainage ditches, railings were placed at Vises Pond and cart ruts on the Common levelled. The costs of attending at local Quarter Sessions and for drinks at Vestry meetings are included.

In several years the Surveyors were out of pocket as the payments received from the Parish were insufficient to meet their outgoings.

Works are often recorded as being done to ‘the highway’ but the following appear;

Batford Bridge, Pickford Bridge, Coldharbour Bridge,‘the bridge against John Freemans & Mr. Evans’, bridges on Popes Lane and ‘against the Red Lion’ and a causeway at Mutton End (these appear to be walkways over ditches), Bamwell Wood, Whitehill in Redbourne Lane, the ‘hollow way’ at Whitehill, The Bull Inn, Hertford, Tring, Berkhampstead, Hemel Hempstead, (where the relevant Quarter Sessions were held) Vises Pond (the Silver Cup pond)