An 1868 Deed of Enfranchisement of copyhold land

The Society was delighted to receive a Deed of Enfranchisement of copyhold land dated 6 November 1868, which was presented to the Harpenden and District Local History Society by Craig & Carol Thrussell in April 2013.

A transcript of the document is attached at the foot of this page. 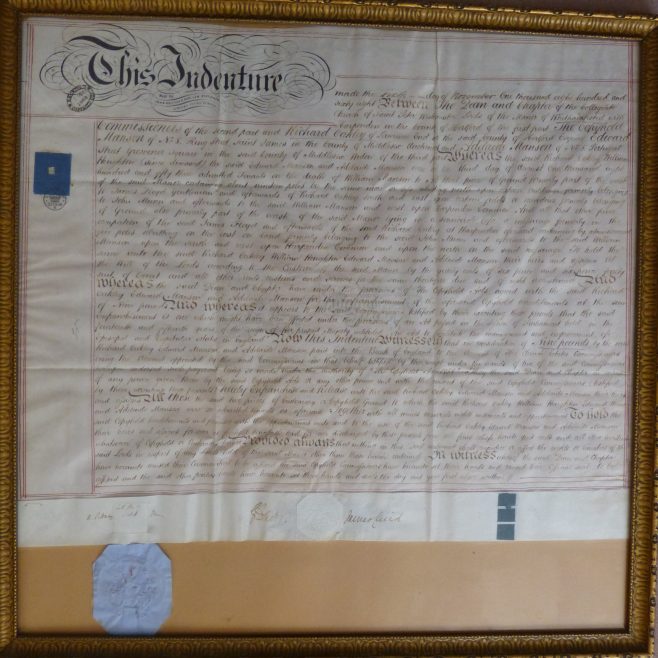 Being the Copyholders in possession of the two pieces of land (described below).

The Indenture is framed, and was written on a pre-printed Indenture form sold by John Brittan & Son, Law Stationers, 3 Mitre Court, Temple. 26.5 inches (67.5cm) in width and 22 inches (56cm) in height. It bears the pendant seal of the Dean and Chapter of Westminster and the seal of the Copyhold Commissioners’ office and an inset representing the seals of the three parties of the third part.

The document is folded twice in each direction giving nine sections. For storage it was folded so that the endorsements at top left and top centre formed the outer faces and the dependent seal was visible. 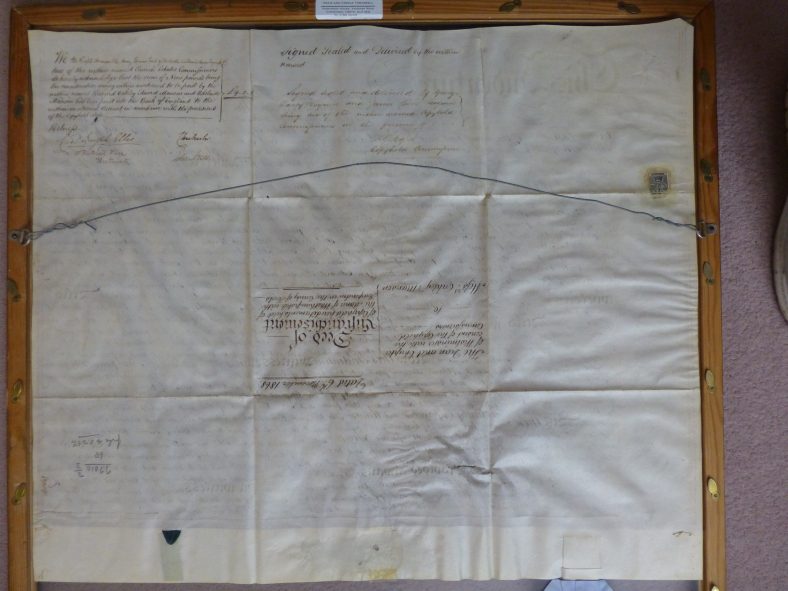 Reverse of the document, folded, with nine parts. John Wassell, May 2013

These endorsements are an integral part of the deed. Such documents were usually stored in a wood or tin box called a skippet. 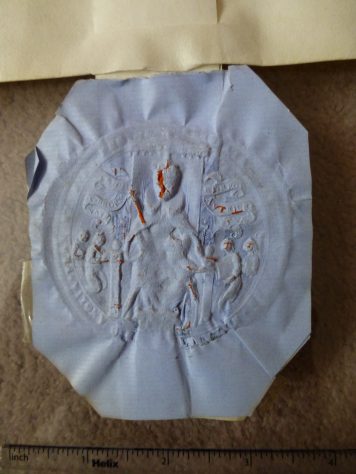 The dependent seal is that of the Dean and Chapter of Westminster and the other seal is that of the Copyhold Commissioners, together with the signatures of George Darby and James Caird, Copyhold Commissioners. Both seals have been applied using mechanical embossing stamps. The Westminster seal is applied to a layer of red wax covered on both sides by blue paper.

The Commissioners’ seal. John Wassell, May 2013 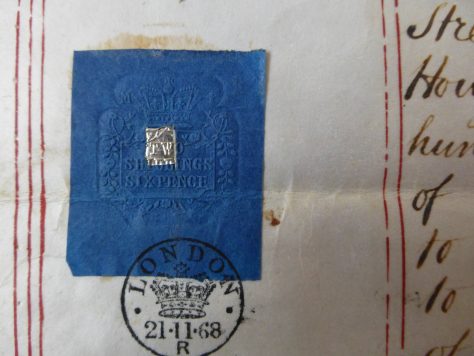 This deed is the one held by the parties of the third part – their signatures were not essential. They would of course have signed and sealed the deeds held by the other two parties.

Stamp Duty of two shillings and sixpence (2/6) was paid at London on 21 November 1868 and a stamp in evidence affixed to the deed.

The dorse (back) includes the following endorsements:

Top left section: “We the Right Honourable Henry Thomas Earl of Chichester and Edward Howes Esquire two of the within named Church Estates Commissioners do hereby acknowledge that the sum of nine pounds being the consideration money within mentioned to be paid by the within named Richard Oakley Edward Manson and Adelaide Manson has been paid into the Bank of England to the within mentioned account in accordance with the provisions of the Copyhold Acts. (£9.0.0. appears alongside the text). 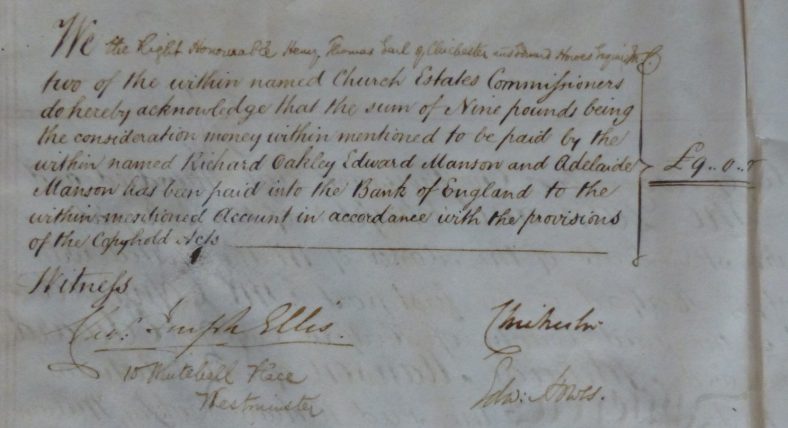 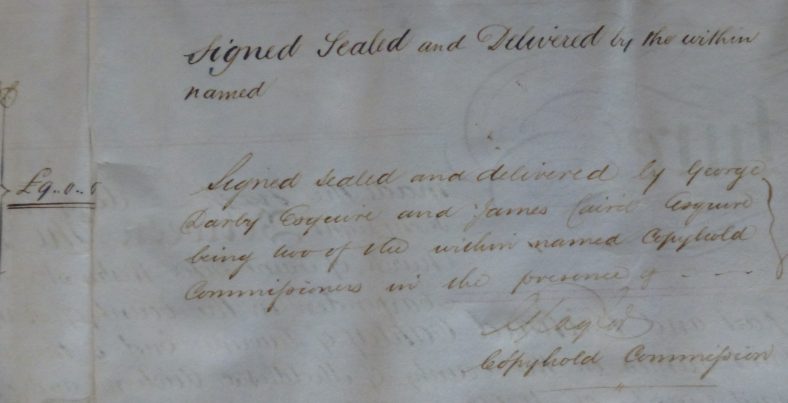 Centre section: Dated 6th November 1868 … The Dean and Chapter of Westminster with the consent of the Copyhold Commissioners . .  . Deed of Enfranchisement ….. to Messrs. Oakley & Manson. 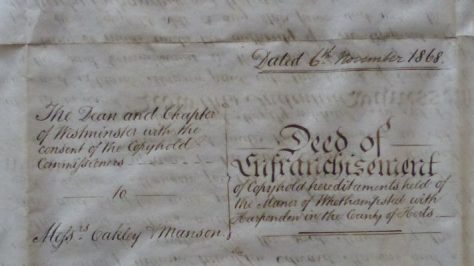 Deed of Enfranchisement, on reverse. John Wassell, May 2013

Bottom left section: The following are noted in pencil – 22010/68; 3/3; file 40.256, and in ink along the vertical axis – 4083. An adhesive stamp is affixed at the fold. The pencil items are probably file details of the Copyhold Commission and indicate that this is the third of three copies. 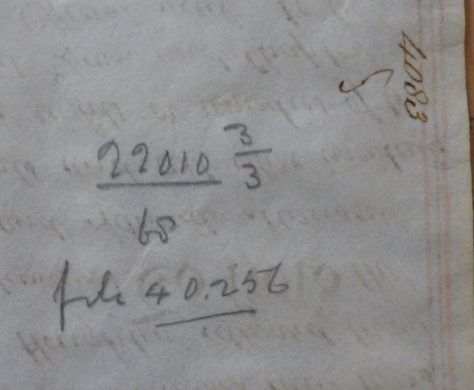 Pencil annotations, probably indicating this is the 3rd of three copies. John Wassell, May 2013 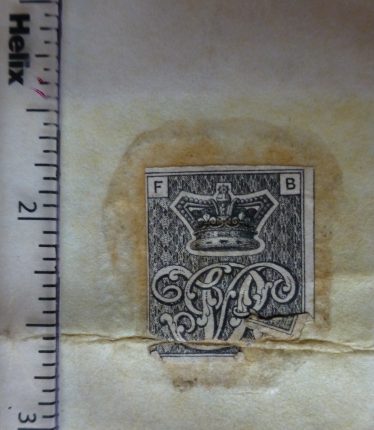 A stamp, damaged by folding. This is not a stamp – see Comment below. John Wassell, May 2013

The stamp is unidentified – it has neither value or inscription. 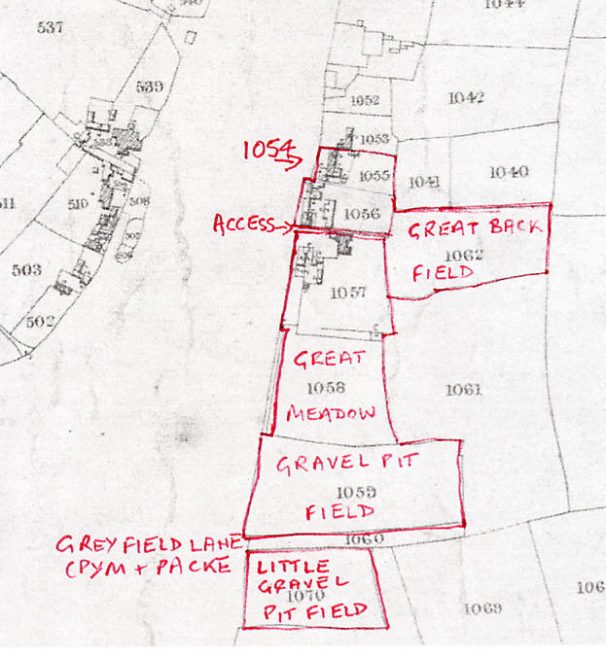 The Tithe Awards for Harpenden, prepared in 1843, do not show the two small pieces of land as separate plots. Richard Oakley is shown as the owner of several plots of land along the east side of the Common from the Friends Meeting House in Arden Grove and along Southdown Road almost to Crabtree Lane. The plots are presumably included within one or two of the three adjacent plots nearest to Harpenden that had houses on them in 1843, one of which would be the freehold house bequeathed by William Manson to Oakley et al. These properties are the only ones listed in the Tithe Awards as owned by Richard Oakley apart from Limbrick Hall Farm. 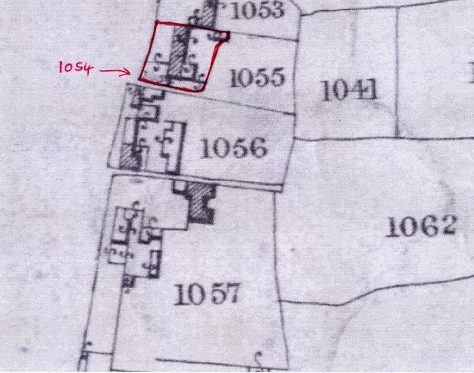 Detail from Tithe Award map, showing cottages and gardens on 1054, possibly the land referred to in the Indenture

The 5 pole semicircular plot would have had a diameter of just under 20 yards (and a radius of just under 10 yards). At 160 poles to the acre of 4,840 square yards, 5 poles covers 151.25 square yards, from which area the above diameter/radius are calculated. The small garden in front of the Dene is far smaller that this and is not a semicircle.

Copyhold or Customary Tenure was a form of land holding originally at the will of the Lord of a Manor according to the custom of the Manor. The holder owned the land but owed duties to the Lord of the Manor.

By the nineteenth century copyhold (and indeed the whole manorial system) was seen as an inconvenient relic of the middle ages and Parliament passed a series of Copyhold Acts that permitted the copyholder to require the Lord of the Manor to ‘enfranchise’ the holding, that is, to convert it to a freehold on payment of a consideration. The Copyright Commisssion was set up to oversee the transaction and set the consideration if the parties could not agree. (The stated aim of the Copyright Act 1858 was to ‘commute manorial rights and gradually enfranchise copyhold land’).

Where the Lordship of the Manor was an ecclesiastical entity of the established church (the Church of England) the proceeds of any such enfranchisement was paid to the Church Estates Commission who invested the proceeds and passed the income arising to the body in question under the terms of an act of 1852 (the act concerning Episcopal and Capitular estates is referred to in the deed).

Copyhold tenure was finally abolished in 1925 and all land so held became freehold.