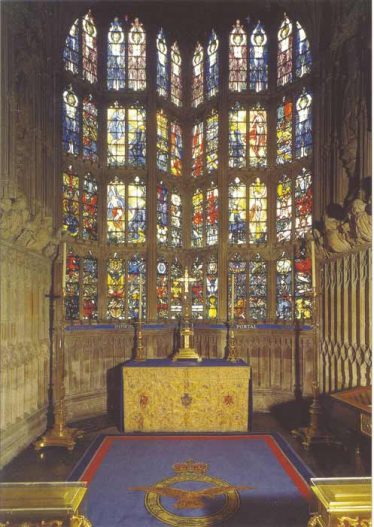 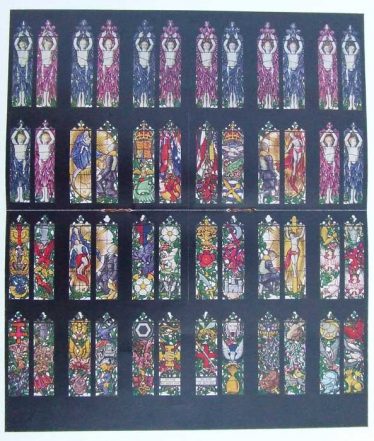 The unveiling of the stained and painted glass window at the RAF Battle of Britain Memorial Chapel, which aroused countrywide interest, reflected in no small measure the accomplishment of two Harpenden firms, who were concerned with the construction of the window.

Designed by Mr Hugh Easton, the window was constructed by Messrs Hawes and Harris of Leyton Road, Harpenden, and the task of painting was carried out by Mr Robert Hendra, Mr Geoffrey Harper and colleagues, at their studio at “Little Gables”, Leyton Road.

The window forms the principal part of the Memorial, is composed of 48 lights, each measuring 4ft by 1ft, and extends across the entire east wall of the chapel.

Work on the window begun in the autumn of 1945 and took some eighteen months to complete.

When it is considered that the lower lights of the window contain the badges of the 63 fighter squadrons that took part in the battle, the extent of the task can be appreciated.  The window also contained the symbolic blue clad figures of a sergeant, a pilot officer, a flying officer and a squadron leader.

How it is done

The firm of Hawes and Harris is one of the few in Britain engaged on constructing memorial windows, and orders are received from all parts of the country.

From photographs of original drawings, full size drawings are made at the artists’ studio, and on these are planned the various sections of different coloured pieces of glass.  The plan is then sent to Messrs Hawes and Harris who select and cut the glass to the required size.

When the glass is cut the pieces are assembled on the plan at the studio, and the outline of the subject is “traced” on the glass.  Composite panels are installed in a vertical frame or easel, so that they are transparent to the artist who applies the various colours with a special paint containing iron oxide.

When painting is completed, the panels are dissected and returned to Messrs Hawes and Harris, where the pieces are “baked” in a kiln at a high temperature so that the glass absorbs the paint.  This ensures long life to the colour, a contrast to old methods, when enamel paint was used.

The pieces are finally re-assembled, permanently fixed together with lead, and the joins are sealed watertight with putty.

Founders of Hawes and Harris were Mr George Harris, who is still actively associated with it, and the late Mr Cecil Hawes, a well-known Harpenden personality who died a few years ago.

At the eastern end of the magnificent Lady Chapel built by King Henry VII is a chapel dedicated to the men of the Royal Air Force who died in the Battle of Britain between July and October 1940.

This chapel received damage from bombs that fell in that year and a hole made in the stonework has been preserved and covered with glass. The Tudor glass in the window had also been blown out at the same time.

The Dean of Westminster was approached early in 1943 by Mr N.Viner-Brady who suggested the idea of a memorial to “The Few”. Dean Labilliere chose this small chapel as one suitable for the purpose.

Lord Trenchard (Marshal of the RAF) and Lord Dowding (who led Fighter Command during the Battle) headed a committee to raise funds for the furnishing of this chapel and for a stained glass window. The English walnut altar was designed by A.E.Richardson with sculptured figures of King Arthur and St George (although an embroidered frontal usually covers them). The silver cross, candlesticks and rails were designed by J.Seymour Lindsay. The chapel was unveiled by King George VI on 10 July 1947.

The Battle of Britain Memorial Window

The stained glass window, by Hugh Easton, contains the badges of the fighter squadrons that took part in the Battle. In four panels are shown visions which symbolise the Redemption. In one a squadron leader kneels before the Virgin Mary and the Christ Child. Below this she is represented in her sorrow with the dead Christ across her knees (a symbol of the sacrifice of the mothers and widows of those who died in the conflict).

On the opposite side a panel shows a sergeant pilot kneeling before the Crucifixion (a symbol of the sacrifice of the pilot himself). Lastly, above this, is the Resurrection seen by a pilot officer (representing the pilots’ triumph).

Seraphim, with six wings and with hands outstretched to paradise, are shown in the top row of the window.

In the central section are the Royal Arms, the badge of the Fleet Air Arm and the badge and motto of the RAF “Per Ardua ad Astra” (Through struggle to the Stars) together with the furled flags of New Zealand, Canada, Australia, South Africa, Czechoslovakia, Poland, Belgium, and the United States of America.

In two of the bottom panels are words from Shakespeare’s Henry V “We few, we happy few, we band of brothers”. Painted on the stonework below the glass are the names of six RAF war leaders (added in 1989). Trenchard and Dowding are buried in this chapel.

More images and information about the memorial window can be found at: