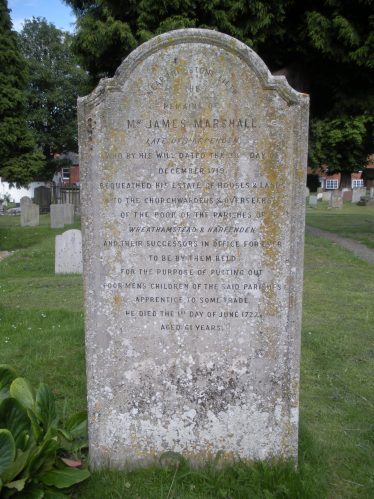 William Hunt (d. 1592), provided for regular payments from his land which were “to be faythfyllye imployed by [the Churchwardens] godlye discretions to the use and benefit of the poor people of Harpeden”.

Edward Bardolf (d. 1630), left £3 6s 8d “emongst such of the poorest and neediest people of the hamlet or parish of Harpeden aforesaid”.

James Marshall (d. 1719), left lands of the benefit of the poor in Harpenden and Wheathampstead “to put out poor men’s children out prentice to some trade and to no other use or purpose whatever.”

William Hunt, who died in 1592 “sick in bodye but of good and perfecte remembrance” lived at Lower Top Street Farm (now 28 Crabtree Lane) was a churchwarden and overseer of the poor.  In his will he left £6 3s 4d per annum for the benefit of the poor people of Harpenden.

By 1973 it was administered by the Harpenden United Charities and took the form of grocery vouchers.  It was recently wound up as worth only £25 and netted less than £4 in interest.

Note; information from New Men and a New Society and The Age of Independence – volumes 2 and 3 of our series of booklets on the History of Wheathampstead and Harpenden, published in the 1970s, based on research work carried out by members of WEA classes (see Publications).