Ways of eaking out meagre wages and coping with misfortune 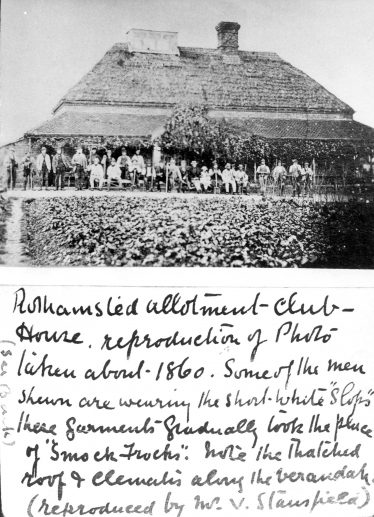 Not everyone subscribed to the philosophy of the 1834 Poor Law Amendment Act: that poverty was a crime not to be encouraged.

The Lord of the Manor, Sir John Bennet Lawes, started or supported many local institutions.  He provided the first allotments in 1852: one eighth acre at 5 shillings per annum.  In 1857 the Allotment Club House was set up by Sir John, as a place where allotment holders could meet for beer and tobacco.  Although Sir John later became President of the Temperance Society, he felt it was much better for working men to meet in a clubroom rather than a public hours.  The following year a committee of ‘Twelve Apostles’ was established to manage the club, and in 1859 the Harpenden Labourers’ Store Society was proposed and approved by members.  This was based on the principles of the Rochdale Co-operative (which had opened in 1844), with shares and profits ‘divided amongst Members, in proportion to their respective purchases’.  It enabled members ‘to supply themselves and their families with every article they may require’ including groceries, clothing and other necessities ‘for the general improvement of their social and domestic condition’.  A Flour Club and a Pig Club were also associated with the Allotment Club.

In 1858 Charles Dickens visited the Club, which he described in the Poor Man and his Beer (1859).  That year Sir John Bennet Lawes granted half a day’s holiday on Saturdays, to enable labourers to attend to their own gardens.

By 1877 membership was 180, mostly “married labourers in the South Harpenden districts. … The cottagers took great pride in these allotments, they being termed ‘The Garden Fields’”. (Edwin Grey, Cottage Life in a Hertfordshire Village, 1934).  Vegetable shows were held twice a year, and each June there was prodigious feast, presided over by Sir John.

The Allotment Club flourished until the 1960s, when it made way for new laboratory buildings and a car park.

Members saved a little each week.  Collectively they could buy more favourably.  Special concessions were made for more needy members: in 1878 the Harpenden Coal Club introduced a rule entitling widows and infirm labourers to receive full benefit of the Club, while any parishioner occupying a cottage rated at not more than £6 could buy coal at wholesale price and receive interest on deposits.

The Women’s Medical Society opened in 1881 for wives of labourers whose wages did not exceed 16 shillings per week: the subscription was 1d per week.

The handwritten rules of 1860 have been preserved, and the box used for lending out ‘baby bundles’ is in our museum collection.  Edwin Grey records that “parcels of linen etc, necessary for maternity cases were loaned to any of the respectable poor who cared to apply for them”.

“Many if the agricultural labourers were members of public-house clubs: these clubs for a small weekly subscription provided their members with small weekly benefits during illness, together with medical attendance and a certain sum at the death of a member of member’s wife.” (Edwin Grey).  There were clubs at the Old Cock Inn, the Red Lion and at The Silver Cup, where “each member when paying in his quarterly subscription was entitled to a pint of beer free”.  Thye Friendly Benefit Society at the Silver Cup was founded in 1832: its rules in 1838 were set out in verse.

The Ancient Order of Foresters established a lodge based at the Railway Hotel (Harpenden Arms) in 1870.  This offered higher benefits than the public-house clubs, which went into decline.

The Harpenden Parish Magazine records many ladies’ working groups, which raised funds and made clothes for missions at home and overseas.  The Rectory Working Party, which made 21 suits in 1879 and sent them to a missionary school in Chota Nagpore, India.  Proceeds of a sale of work by the Zenana Missionary Society went to support an orphan Indian girl.  A number of groups including the SPG raised £16 at a sale of work in 1896 to maintain an Indian girl in the mission school at Dehli.  The Guild of Needlework met to make ‘useful garments for the benefit of the poor’ and gave them to the Railway Arch Mission in East London between 1886 and 1897. The Church Missionary Society – Ladies Working Party met frequently to learn about religions in other countries, and the Gleaners’ Society formed a Harpenden branch in 1899.