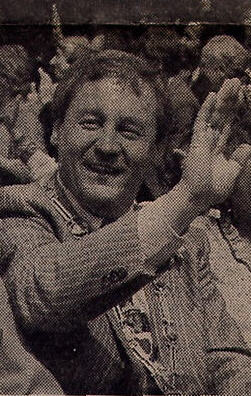 zoom
Walter Zuber, Burgermeister of Alzey, at the Harpenden Carnival in 1988
Alzeyer Presse, May 1988 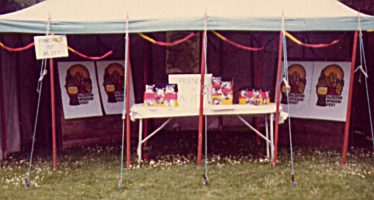 On 24 May 1974, in the course of an official visit from Alzey to Harpenden, Dr Buchheim, Kurt Neumann, Dr Meyer-Schwarzenberger and Walter Zuber visited Highfield Oval. Though brief, this visit was the start of a significant friendship, particularly between the Social Democratic Party (SPD) group on Alzey council and the Harpenden branch of the National Children’s Home. The previous evening they had been entertained by Harpenden Rotary Club, including singing by the NCH ‘Sovereign Collection’ choir. This led to an invitation for NCH Superintendent Colin and Majorie Burn and five girls from the choir to visit Alzey. These talented girls took part in youth festivities at Alzey Castle in August 1974 and 1975.

When the SPD group arranged its next visit in 1975, this included a day at the National Children’s Home on Sunday, 24 September, starting with a service in the Chapel, and followed by a tour of the Oval, where they saw the family units of children and their house-parents. They were impressed to hear that many young people returned when married to show their own families where they had grown up.

The Alzey visitors were interested to learn that the NCH was funded by charitable donations as well as fees. This led them to resolve to support the NCH from their own fund-raising. Walter Zuber invited 12-15 children to spend two weeks with Alzey families the following summer. On their return home in September 1975, the SPD (who controlled the council) group appealed to the people of Alzey to collect good used toys and clothes – and stamps for the NCH stamp-collecting club. Walter Zuber, Kurt Neumann and Jakob Althaus chartered a minibus and brought their Christmas gifts to Harpenden on 18 December 1975.

Arrangements were then made for the first visit of NCH children from 22 August to 5 September 1976. There was a huge response to calls for families to host the 14 children – aged between 10 and 16. Twice the number could have been accommodated. Alzey council gave a 60% subsidy for the travel costs. After a reception at the Town Hall and introduction to the host families, there was a very full programme for the children and their hosts to see and learn as much as possible about Alzey and its surroundings. A highlight of the programme was a celebration in the courtyard of the Castle on 1 September, when the official St Albans/Harpenden delegation was present. [This was the period when twinning had been passed from Harpenden Urban District Council to the new City & District of St Albans.] The NCH choir sang from their wide repertoire, and there was Scottish dancing – somewhat interrupted by a heavy storm. Colin Burn thanked the people of Alzey for their generosity. During the visit the choir also entertained patients throughout the Alzey hospital, and most of the host families and children took part in an International Youth Festival on the Nieder-Wiesen campsite. Walter Zuber reflected that it would have been good if there had been such international contacts during the previous fifty years.

Many of the participants kept up contact by letter, and preparations were soon underway for the visit for the following year, which was to involve different children, so that as many as possible could benefit from the experience of twinning exchanges.

The Alzey SPD delegation brought even more Christmas gifts on 8 December 1976, and enjoyed a Christmas carol service in Highfield Oval chapel, followed by a fete for Harpenden supporters of the NCH, where the Alzey visitors bought recordings of the NCH choir. This visit cemented the warm relationship between Colin and Marjorie Burn with their Alzey benefactors – thereby deepening the link between Harpenden and Alzey.

Afterword: The SPD group continued to support the NCH for many years, with groups of children visiting and re-visiting Alzey each summer. This was not always easy for the host families, who sometimes found their guests ‘challenging’. Nor did the people of Alzey fully realise that the NCH sought financial support rather than minibus-loads of second-hand toys and clothes as Christmas presents. However, the gifts were very well-meant, and Walter Zuber was appreciated as a ‘larger than life’ enthusiastic supporter of internationalism.

* Postscript We have recently learned of the death of Walter Zuber on 25 June 2014, aged 71, after some ten years of debilitating illness.