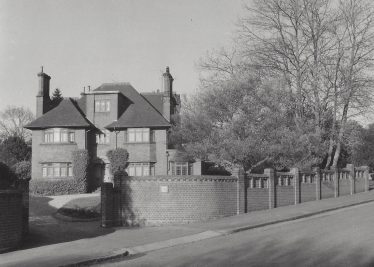 Extracts from ‘Suppositories, Stools & Such-like’ by Brenda Fraser-Newstead – an article on pre-national health service medical care, copied from the Internet.

The National Health Service was established in 1948, when I was seven years old and my brother three. Prior to that date I assume my parents paid into a private healthcare insurance, to cover basic healthcare costs.

Once the National Health Service came into being, my parents registered with a GP in Harpenden, about four miles from our home, and for years, until his retirement, our National Health GP was Doctor Hester.

Dr Hester was a charming and most charismatic character who gave us excellent service, was most professional and remains forever with admiration and affection in my memory. During my early life and schooldays he made countless visits to our home. I suspect my biggest problem was bronchitis, possibly owing to my earlier experience of whooping cough. In the event that we children were ‘off-colour’ my mother would leave us in bed, lock the door and go off to work, knowing my brother and I would be safe until her return at lunch-time or early afternoon. There were no mobile phones and we did not have a telephone, but it was a well-calculated risk and I can understand that for her to have taken time off work, would have meant loss of income, on which we all depended. My parents always struggled financially.

Following the inception of the NHS, my mother would have had no hesitation in ringing the doctor’s surgery for advice. She would take the necessary coinage and cycle to the public telephone box on the estate, to do so. If the symptoms were more severe and she suspected we were running a temperature, she would request a visit. Doctor Hester always did his rounds after surgery, which finished at about 11 am. During the morning my mother would bustle around in preparation for his arrival. Our beds would have to look tidy, the floor swept and the rug in front of the fire shaken outside. The coal-fire would be banked up, to heat the bungalow and produce a welcome glow. There was no hand basin in the bathroom, and so the kitchen sink would be cleaned, and the draining board, and everything tidied away. She would put a clean glass of water on the window-sill, in which the doctor would place his thermometer, a clean hand-towel nearby and soap with which the doctor would wash his hands. This ritualistic behaviour continued throughout our long association with Doctor Hester.

Everything was on hold, we children holding our breath in anticipation. No food or drink would be allowed, even though it might be lunchtime. At about the expected time there would be a knock on the front door: everyone but the doctor came to the ‘back door‘, which was actually to the side of the bungalow.

Doctor Hester was erudite, polite, groomed, immaculately presented, always in a pinstripe suit with carefully pressed shirt and cuffs. He always wore a tie, navy-blue Crombie coat and highly polished black shoes, and he carried a black briefcase. His hair was almost white, no sign of thinning, and beautifully cut in the traditional manner of ‘short back and sides’, his complexion pale, his spectacles silver-rimmed. He was articulate and enunciated his speech in a most middle-class, gentile manner which was not in the least offensive.

He would enter the room looking directly at me, sit on the side of my bed and without averting his attention, ask of my mother ‘and how is Brenda today Mrs Woodcock?’ My mother would explain the cause of concern and he would proceed to feel the glands in my neck, look into my throat (my brother and I both had our tonsils and adenoids removed when I was about nine). He would place his thermometer under my tongue and hold my wrist to check my pulse. His hands were always soft and quite warm, as I recall, perhaps because he wore leather gloves, which he removed on arrival. He would examine my chest with his stethoscope, front and back, and tap my back using the fingers of his left hand to tap across, whilst asking me to breath deeply and to cough. ‘Brenda has a slight temperature’ he would say. ‘I am prescribing something which will help her. Keep her warm and in bed for a few days, with plenty of fluids, and let me know if there is no Improvement.’ He would write a prescription and hand this to my mother before bidding me goodbye. My mother would lead him into the kitchen to perform his ablutions before his departure. At this point we all relaxed, and my mother would turn her attention to lunch. Either she or one of her neighbours would get the bus into Harpenden to obtain the medication. Neighbours in our community were always ready to help one-another.

Doctor Hester obviously dealt with a variety of problems which we all encountered, and one problem we all seemed to have – from time to time – was constipation. Liquid paraffin, cabbage and other ‘greens‘, syrup of figs, plums and prunes were some natural remedies, but failing everything, suppositories were a reliable remedy. One of my parents also used these for the relief of ‘piles‘. Until my dying day I shall ever recall Doctor Hester saying, with great decorum, ‘do not strain whilst at stool‘. For years I imagined my mother sitting on the kitchen stool straining the vegetables and wondered why this could be detrimental to her health!

A friend of mine once remarked that his mother was in such awe of her doctor, that had he suggested to her that she take a clean axe and chop off her leg to relieve the pain of arthritis, she would willingly have done so. I cannot imagine Doctor Hester proposing anything as extreme, but I am certain that my mother would follow his instructions to the letter and without question. He in turn served us most faithfully and conscientiously until his retirement from the profession. There was an aura about Doctor Hester: he inspired admiration and confidence. We felt ourselves blessed to have such a refined gentleman and someone so well-educated, attend us in our humble abode. We were privileged to have the benefit of his sound advice and care.