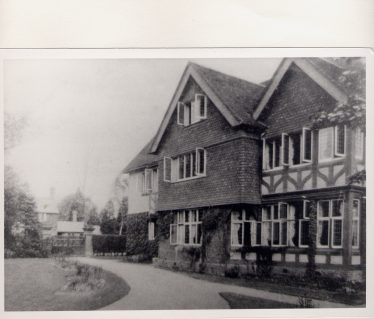 St Helena’s, at the time it was a school (c.1910). Credit: LHS archives, Harpenden Collection

After the First World War, the people of Harpenden raised the sum of £5,456 as a contribution to a war memorial for those who had died.  All of us are familiar with the Memorial Cross on Church Green which records the names, ranks and Units of the dead.  However the Cross was only part of Harpenden’s tribute: the remaining funds were used to create the Memorial Nursing Centre ‘for the relief of suffering and prevention of sickness and disease’.  You may be surprised to learn that what was our very own Community Meeting Point now occupies those premises!

St Helena ’s, as the property used to be known, was built in 1897 as a girls’ school (see article in Education).  It was purchased by the Memorial Nursing Centre Committee in 1919 for £3,100 as the cost of providing new building would have been more than the fund could bear.  Some structural alterations and additions were made (including provision of central heating and a hot water system) and the building was redecorated both inside and out.  The committee considered itself ‘fortunate’ to have obtained such a suitable building together with grounds described as comprising lawns, flower border and a vegetable garden.  It is good to see what Paul and Howard have done to restore the attractiveness of the original site (but when are ‘home-grown’ carrots and potatoes going to be on the menu in the Day Centre?)

The Memorial Nursing Centre was opened at 3.30pm on Saturday October 9th 1920, by Lieutenant-General the Earl of Cavan, General Officer Commanding-in-Chief, Aldershot Command.

At that time, as he entered the building he would have first stepped into a spacious hall with the names of the fallen men inscribed on its walls.  Visitors and children attending the clinic used this as a waiting area.  On the north side of the building was the Dental and Ophthalmic Clinic with a dark room.

The east side of the building contained the District Room for treatment of minor injuries by the resident nurse and opposite was the Massage and Electro-Therapeutic Clinic where ex-Servicemen were treated.  The large room forming the south-west angle of the building, was used as the Maternity and Infant Welfare Room.

Upstairs there were two wards containing two beds each.  Very seriously ill or emergency patients could be dealt with here, and exceptionally*, maternity cases.  Each of the three District Nurses had a bedroom here and shared a bathroom, dining room and sitting room.  On the very top floor were the Caretaker’s rooms, a storeroom and a spare bedroom for emergencies.

In 1941, during the Second World War, all the Clinics were transferred to the Red House and 40 Luton Road was requisitioned by the Army as a billet for ATS girls working at Luton Hoo (then the headquarters of the Eastern Command).

After the end of the war, in August 1946, it was decided to convert 40 Luton Road into five flats and the first families moved in during December of that year.  However, already by 1949 there was another change of plan; the families were moved out, the building was de-requisitioned and plans were afoot to transfer the clinics back from the Red House.

After extensive alterations, this came about in February 1952 and there are many women in Harpenden today who remember visits to the Child Welfare Clinic, which continued to operate until May 1991.

It is good to reflect that during the time since October 1991 that Community Meeting Point has been installed at 40 Luton Road, the building has continued to serve the purpose for which it was originally acquired by the Memorial Fund, namely ‘the welfare of the living’.  Thank you Mr Eric Brandreth for providing the facts – any inaccuracies are mine! 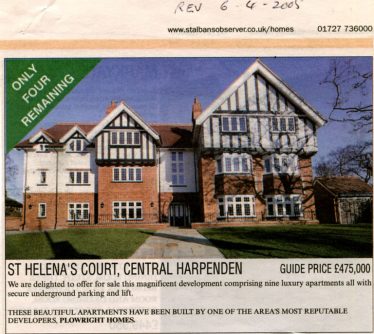 The NHS decided that the building was surplus to requirements and wanted to sell it.  A long and vigorous campaign to retain the building as a community facility for the town was of no avail and three years later Community Meeting Point had to vacate the premises.  In 2002 the building was bought by a local company, Plowright Homes Ltd for demolition and replacement by private residential housing. In 2004, St Helena’s Court was completed, comprising nine apartments, with an external design reminiscent of the old St Helena’s.