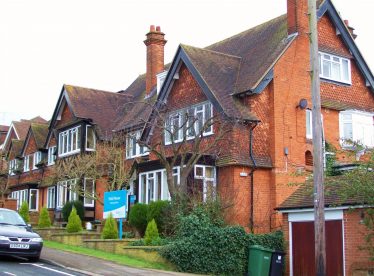 Field House in Townsend Road was built towards the end of the nineteenth century – and it has recently come to light that the architect was Mr E J Dodgshun FRIBA, whose design was published in The Builder of 9 September 1898.

It was a private house until July 1948 when Mr Roland Walker (see Comment below) sold it to the National Children’s Home for £8,500. The NCH used it to supplement their existing accommodation at the Oval, but closed it in about mid 1950.

In October extensive alterations were started, and on 7th December 1951 the Herts Advertiser reported “Field House, still in the throes of alterations and decorations, has become a home [run by the County Council] for 17 boys and 8 girls, most of whom have been transferred from “The Grange” at Stevenage, which is being closed. They have come from all over Hertfordshire into the kindly care of Mr and Mrs B J Ward, the young couple who are in charge. The children go to local schools.

An old billiard room with a small platform has made an excellent games room, while outbuildings include lofts which will be made into “dens” where the children can make as much noise as they like.

Mr Ward, an ex 14th Army man, who served with the Gloucestershire Regiment in Burma, was acting Superintendent at the Grange.”

Early in the 1980s Field House no longer met the required standards, and it was closed by December 1983 . Children and staff were transferred to other homes, and Field House was bought by a consortium of local people for conversion to a Nursing Home.

Part of the grounds was sold for housing development and Field House Close was built there. In 1986 this was renamed Hardenwick Close.

The House itself was completely renovated. At about the same time the Maternity Unit at the Red House closed. Sister Mary Achermann, who was Head of the Unit, became Matron of Field House Nursing Home, and some of the staff transferred with her. It opened in April 1985 and has continued as a Nursing Home run  by BUPA.