The Origin of the Harpenden Day Centre

This account was written spontaneously from memory in c.1993, while Reg Davis was preparing his history of The Harpenden Trust: A Lifeboat in Harpenden, published in 1998. It was discovered recently in the LHS archives on the Harpenden Trust (RB 93).

In 1923 a committee chaired by Mr McLatchie, whose members, amongst others, were Mrs Hilda Raban, Mrs W.O. Peake, Mr Frank O. Salisbury, Mr Bernard Brigham and Mr Reg. West, who was Treasurer, decided that there was a need to improve the lot of Harpenden’s old folk. Almshouses were considered but the few hundred pounds collected was not enough, so the money was invested. When Mr McLatchie died Mrs Raban (sister of Frank Salisbury, ed) became Chairman and Mrs Doris Pigott (happily still one of the Trustees of the completed project in the 1980s) joined this committee which then became the Harpenden Old People’s Welfare Committee. The Committee decided that the money already raised should remain invested to be used as and when possible for a building designed for Harpenden Pensioners.

A site for the Day Centre is identified

In the early 1950s the Harpenden Trust formed a sub-committee to consider buying a house as a Day Centre for old people, but the cost proved too high. However, the Trust, and other interested parties kept the possibility in mind year after year until in 1971 Mr E.A. Ackroyd (a Vice President of The Harpenden Trust and a Herts County Council Alderman) and Captain K. Hills Bond (Chairman of the Old People’s Welfare Committee) both of them Trustees of the ancient James Marshall Charity were negotiating with the Herts County Council who wanted to lease an excellent site, owned by the Charity, near the village centre, on which to build an old people’s residential home: Ernie Ackroyd and “Gaffer” Bond quickly realised that the area could be increased to allow a Day Centre to be built adjacent to the proposed home. 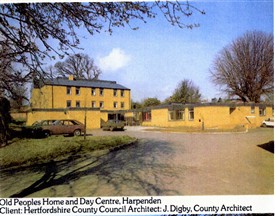 Mr R.W. Gray, then Chairman of The Harpenden Trust, arranged for the Trust to give the scheme its full support, and from then on he chaired all the various committees and groups which eventually led to the realisation of the scheme some five years later. The first meeting was in November 1971 when representatives of The Harpenden Trust, Marshall’s Charity, W.R.V.S., Courage Club, Darby and Joan Club, Old People’s Welfare Committee, Meals-on Wheels, Red Cross, Helping Hand and the (former) Harpenden Urban District Council, met and formed a committee, whose objective – to provide Harpenden with a Day Centre – was fully supported by Harpenden’s County Councillors, Messrs P.C. Burgin and B.G. McGuiness. This committee then met officers of the County Council and the project, in principle at least, was on its way.

Mr A.G. Finch was Hon. Secretary of the committee throughout and it was he who thought of the notion, at a critical stage in the negotiations, of a “tripartite” approach to the total Site development, embracing a Day Centre (for those still more or less physically independent but in need of social stimulus), Day Care in the Residential Home (for, as it were, the next stage, i.e. those still living in their own homes, but infirm enough to require some occasional or regular institutional support) and full Residential Care itself. It was agreed that the Day Centre should also provide lunches five days a week for the existing Council-supported Meals-on-Wheels service, run by the Red Cross. It was this integrated all-in concept, new and unique in this Country, which persuaded the Director of Social Services (Mr James Chaplin) and his Chairman of the Social Services Committee at County Hall (Mr Philip Bolshaw, C.B.E., himself severely physically handicapped) to negotiate for the County Council to include the building of the Day Centre as well as the Residential Home in its budget at a time of financial stringency.

With County approval secured, a Planning Committee was set up whose regular members were E.A. Ackroyd, Captain K. Hills Bond, A.G. Finch, Mr and Mrs R.F. Davis, Mrs Doris Gregory, Mrs Margaret Scougal, Col. H.F. Walthew and B.J.S. Wood. Others attended from time to time, including C.P. Rylatt (as Hon. Legal Advisor) and representatives of the Rotary Club and Round Table etc. As the County were funding the entire building cost on condition that the community of Harpenden would be responsible for actually running it, the Committee’s brief was to raise money to equip, furnish, provide for interior maintenance, and to set up the means of managing the Day Centre on a voluntary basis, apart from paid kitchen and cleaning staff.

Members of the Committee and the County Architect (Mr Anderton, who proved most helpful throughout) visited a number of Day Centres in Herts, Kent, Middlesex and Cambridge and the best features of each were incorporated in the plans of Harpenden’s own Day Centre.

In 1973 an Appeals Committee was set up (Messers  Ackroyd, Bond, Finch, Foxwell, Filtness and Cotton) and it launched three levels of appeal for funds, viz a personal letter from the Rt. Hon. Lord Hill of Luton, President of The Harpenden Trust, to a certain range of local people (this raised over £2,000), a house-to-house appeal which collected some £800, a general circular to all Harpenden Clubs, Organisations and Societies which raised over £8,000. Included in the £8,000 was a grant of £2,000 from Harpenden Round Table and £1,000 from the Old People’s Welfare Committee, largely the fruits of the money originally invested in the early 1920s. The various appeals raised nearly £11,000 in all.

Thanks to this encouraging response, a Furnishing Sub-Committee was formed under the inspired chairmanship of Harry Walthew, greatly helped by Mrs Evans and including Mrs Brewster, Mrs Bowran, Mrs Allen and Mrs Scougal. This soon produced a comprehensive list, and placed orders for  everything required (within its budget too!*) against the planned opening date in 1976.

*The Minutes are at variance in that furniture and fittings exceeded budget, but in line with inflation.

At the same time, it was agreed that the Day Centre, as it was to be managed entirely independently of (but in suitable co-operation with) the adjoining Residential Home, also now on the brink of being built, should be a registered charity itself. A Trust deed was therefore drafted and in due course formally registered by the Charity Commissioners. The Trustees were Messers R.W. Gray, E.A. Ackroyd, R.F. Davis, A.G. Finch, A. Foxwell, K. Hills Bond and Mrs Doris Pigott, with C.P. Rylatt as Honorary Solicitor, G. White as Hon. Treasurer and David Buick as Honorary Auditor: Lord Hill was also ex officio a Trustee as he had agreed to be President of the Day Centre.

Building work started in September 1974, and the following year the Trustees and the original Planning Committee approved a formal Constitution for the Day Centre which restricted its use to members, who must be Harpenden residents, and be of pensionable age or physically handicapped. The running of the Day Centre was to be by a Management Committee (which took over from the Planning Committee), the day-to-day operations being in the delegated hands of a House Committee (Hon. Chairman Mr Ron Barley) Hon. Bursar (Mr Reg Davis) and Hon. Transport Officer (Mr Rob Lackie). Mrs Hossack appealed for volunteers to serve the lunches and soon had teams of ladies arranged on a daily basis to cover the Dining Room and Coffee Bar. It was realised that house-bound members would require transport to reach the Centre and Mr Bob Lackie recruited a pool of volunteer drivers to drive the Courage Club bus as well as using their own cars, so that about 80 house-bound members a week could be brought to the Centre.

Agreements were negotiated with the County Council for financing certain maintenance expenditure, and with the St. Albans District Council for the subsidised cost of the meals.

The Harpenden Day Centre was opened by Lord Hill in October 1976. 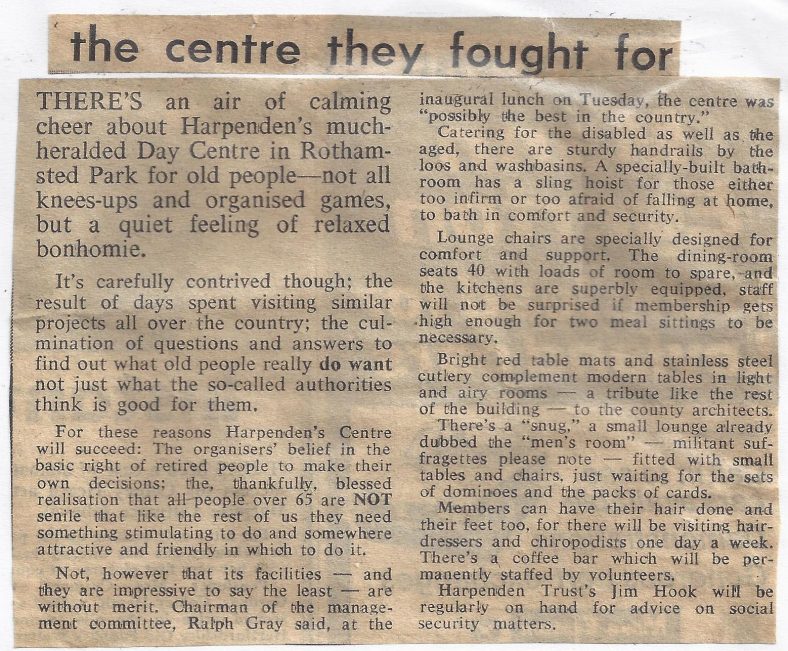 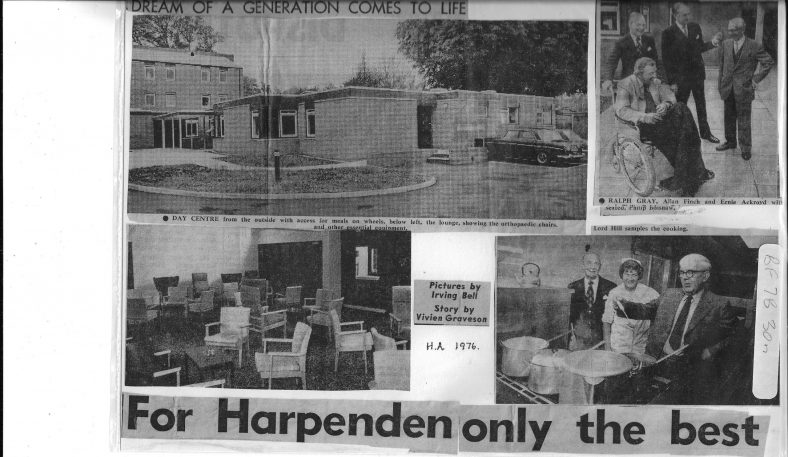 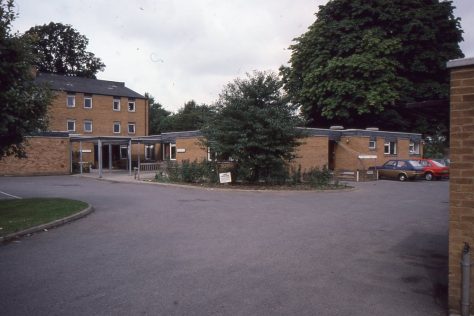 Harpenden Day Centre became a well-loved part of community life, supporting many hundreds of local people and the base for local organisations such as the Red Cross, Meals on Wheels and other groups providing welfare services.  But times changed: the residential home with shared rooms and no ensuite facilities was no longer ‘fit for purpose’. 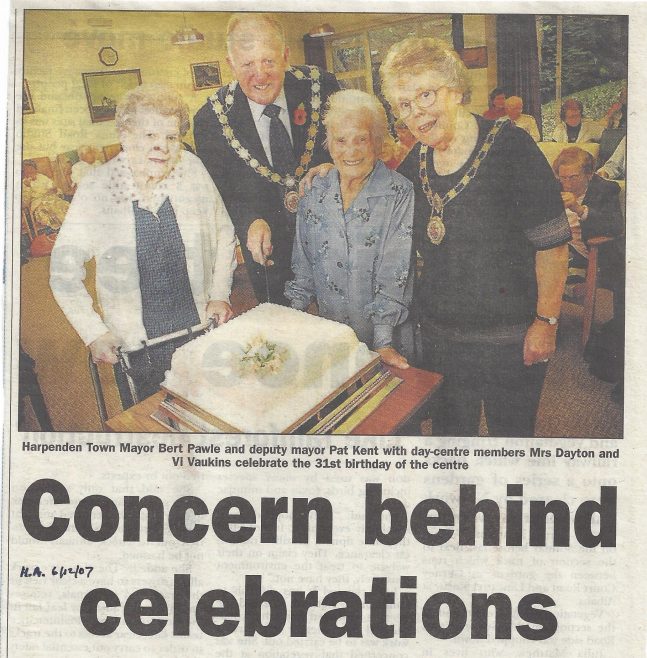 Plans were drawn up for rebuilding James Marshall House, and for refurbishing the Day Centre. However, planning permission for a replacement James Marshall House was refused, and with it the prospects for renewal of the Day Centre. Hertfordshire County Council negotiated with Quantum Care to build Willow Court in Aldwickbury Crescent, as a not-for-profit care home, but the many services offered by Harpenden Day Centre were dispersed, with the Harpenden Trust supporting as many as possible. 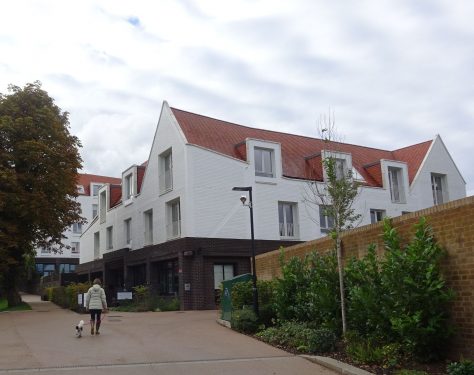 Further plans were eventually approved for the James Marshall site to be developed as privately-owned apartments for residents aged 60+. This has no connection with the James Marshall Foundation or any other Charity. The approval included promises by the developers to include public access to the restaurant and services provided for the residents. The restaurant has opened, but it is not clear at the moment whether other sevices are available to the public. The five-storey apartment block is known as no. 23a Leyton Road.