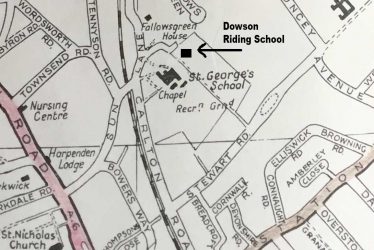 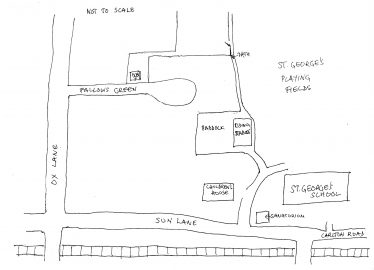 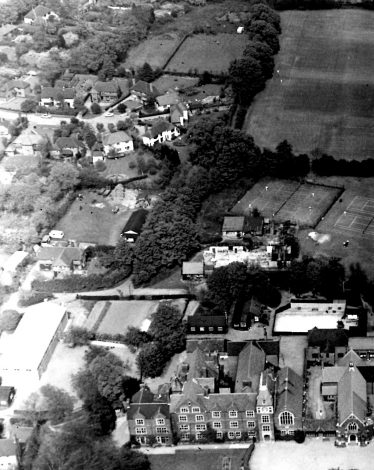 Frank and Anne Dowson owned the riding stables behind St. George’s School where the school boarding house (Crossthwaite) is now. They had no children and devoted their life to their horses and ponies and to teaching children to learn and enjoy riding.

There was quite a large stable area with stalls to house the ponies while preparing them to go out on a ride. The tack room was adjacent to this where all the saddles and bridles were stored, an open area where we used to hang the bridles on hooks so that they could be cleaned and another area at the back where hay was stored. It had an open paddock in front of it. As a child I did not consider where Frank and Anne lived but I’m sure it wasn’t at the stables although they were there from early morning to late evening.

Anne was the one who took the riders out on a hack and was very safety conscious and quite cautions but very kind and encouraging. Learners were taken on a lead rein beside her as she rode a lovely horse with a beautiful temperament.

Frank was not allowed to ride as he had been kicked in the head by a horse in his younger days and although he always wore a cap you could see the dent in his head. He was quite mischievous and when Anne had gone off with the riders those of us who spent time at the stables, with Frank’s encouragement, often got the ponies out that were left behind and did a bit of jumping or racing or games but had to get everything cleared up before Anne returned and not say anything !

Cleaning tack and mucking out

I started going to stables probably from the age of about 8 or 9 and spent part of nearly every day of school holidays there. I only rode once a week but just loved it all. Frank and Anne were so nice and lots of us were encouraged to spend time there if we wanted to. We had to do jobs as well, like cleaning tack and mucking out the stalls but also got to do a bit of free riding with Frank when Anne wasn’t there. Another activity that we were able to do was get up early 5.30 – 6.0 and fetch the ponies from the fields. They were kept at the bottom of Ox Lane in a field in Cold Harbour Lane or off the top of Sun Lane in the field above Harpenden Lodge (home of the Lyddeker family, where the estate and park now is). We used to ride them down to the fields bare back after the ride and fetch them in the morning the same way. Some times depending who was around we had to ride one and lead another. Frank always accompanied us on these trips. I must have been a regular there until I was 17 or 18 and that was in the late 40s and early 50s so it is difficult to remember everything and there may be others who spent time at the stable who have different memories.

I am so grateful to Frank and Anne for the experience they gave me in riding and caring for horses and my love of them that has lasted all my life. I have had many spells of regular riding throughout the years on lots of different horses and ponies which their early teaching enabled me to do. I never managed to persuade my parents to buy a pony which I always dreamed of as a youngster, but I managed to exercise other people’s until well up into my 70s so I was very lucky.

I really don’t know when the stables closed (1) or what happened to the Dowsons as I had moved on but it may be recorded somewhere. It would be nice to know. Perhaps someone has knowledge of it.