Jill Hunt shares some memories of a corner of Harpenden that meant home to thousands in an article in Hertfordshire Countryside, July 1987.*

“It is strangely silent now, this place where once the sound of children’s voices rang. The soft  throb of a tractor is sometimes the only sound, as far across the meticulous green ‘Oval’ at Highfield, it travels its spiral course, spewing out new mown grass in pale green clouds. Ken’s figure, hunched over the steering wheel, twists and turns now and then as he glances behind to check the results of his progress. They have all gone now, almost 4000 of them over the years – children who sought love and security, which by some misfortune had eluded them. A community, all but independent of the outside world, with its own garden produce, bakery, laundry, cobbler, plumber, printing works, groundsmen.” 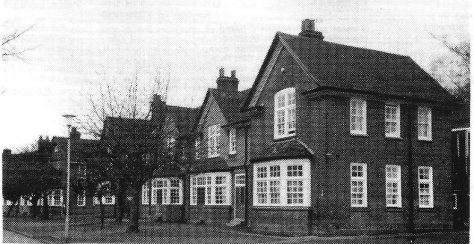 Flats occupied by boys, on the south side of the Oval. Credit: Scan from Ken’s Kingdom, Hertfordshire Countryside, 1987

“An Englishman’s home ……..” the saying goes, but Ken Parker’s is more than a castle, it’s his kingdom. This is a home he shared with countless others, and as he circles his precious sward, his mind must often go back to that November day in 1940 when he and his twin brother ended their journey from Sheffield along the narrow, winding lane that led to the National Children’s Home at Harpenden.

At nine years of age, the vast green oval circled by large red brick houses was awe inspiring. At the Admin Block, with its pillared porch under the big white clock, the welcome was warm, but it was disconcerting to be split up from his twin as Ken was led down the  path between neat privet hedges and under rose arches to ‘Botley’ and Fred to ‘Ashcroft’. 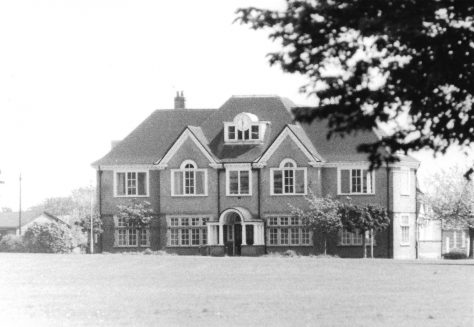 Three Sisters were responsible for Ken’s new family of twenty four boys. One, soberly attired in blue dress, white collar and cap with a prim white bow under her chin along with a grey uniformed ‘probation’ sister and a Candidate (trainee), enveloped in green overalls. No domestics in those days – so all children over seven were expected to help with the chores. Up in the sewing attic behind the clock, nimble fingered Sisters Beatrice, May and Violet produced a never ending supply of clothing for their active and growing charges. The sewing machine still stands by the window, but the shelves and long hanging rail are empty. No busy needles, snipping scissors, no muted voices as you climb the three flights of stairs.

The children were roused each morning at 6.30 a.m. by the clanging of the great fire bell across the campus and by 7.30 a.m. they were washed and dressed ready for breakfast, beds made and mattresses turned before Sister came to check – invariably too late to see the poor, unfortunate house cat expelled unceremoniously through the window, bearing the blame for the occasional wet bed. Cornflakes and bread and butter quickly disappeared, as did the weekly boiled egg on Sundays. Times for their chores before at 8.30 sharp, the Sisters led them to congregate in family groups in the Chapel for morning prayers. Afterwards, the youngest set off for St Nicholas Church School in the village, while the others filed into their classrooms in Bernhard Baron Hall, on the campus, under the eye of the Headmaster, Mr Lockwood. 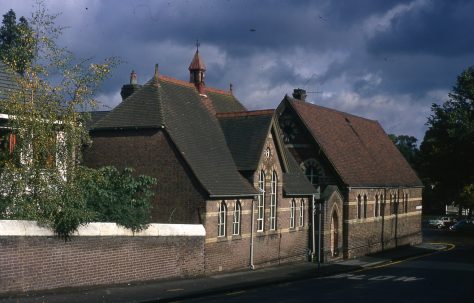 At mid-day, 16 buckets of potatoes, roughly peeled in an ancient machine behind the Admin Block were collected by older boys and Sister ‘eyed’ them ready for the pot. Bill Fordham’s job was to distribute provisions in a two-wheeled handcart, and Ken chuckles, remembering a prank which sent his precious load flying in all directions earning the unfortunate Bill six of the  best the next day.

One day, Ken and his twin swopped flats at tea time for a lark. Undetected, they repeated the  exercise – Fred enjoyed his tea, but as Ken was about to tuck into his he enquired curiously “Where are the saucers?” The blue-clad Sister whirled round, keenly searching he impish face. “We don’t have saucers here,” she said, “And you don’t belong! Back you go to Botley, and you can send your brother back here!” Discovered! And so a rather hungry little boy returned to change places with his more fortunate brother with instructions for the two of them to report to Mr Saul Brown the Governor the next day. 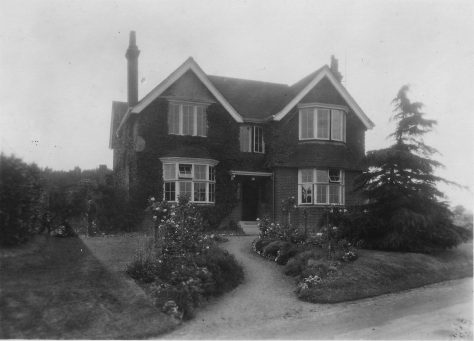 The Governor’s House, at the entrance to Highfield Oval. Credit: LHS archives

Helping the little ones, chores and school were routine at the Home, but there was still time to play though no-one was allowed on that central area of grass except perhaps courting couples, out of earshot perhaps but certainly not out of sight! The woods, which shelter the tiny cemetary for children who died from consumption in the sanatorium up the lane, were out of bounds for fear of stray shot from neighbouring farmers’ guns, but in later years rules were relaxed and boys were free to go there while the girls, always strictly separated from the boys, played in the spinney behind their houses.

After tea, playtime was punctuated every half hour by the fire bell, summoning the younger ones first until the last at 8.30 p.m. so that even the eldest were in bed by 9 oclock.

Perils of having no ‘pass’

As teenagers, Ken and the others looked forward to excursions into the village, but before they could go, passes had to be signed by the Sisters and the Governor, something  not forthcoming if they’d misbehaved, or worse, played truant without one! It was pretty embarrassing to have orders to return home flashed across the cinema screen when someone ‘split’ on  you, and a formidable task, scrubbing the whole of the Bernhard Baron Hall floor area having been caught returning, absent without leave! Saturday, of course, was no day to go missing! Every Saturday afternoon at 2 oclock (sic) sharp, each and every one at the Home would be required to be present on the playground behind the school, and if one was missing, all must remain until that one was found.

Pranks were inevitable, of course, like the pyjamas flying bravely from the flag pole and the sight which met the Sisters’ horrified gaze after a night in the shelters during the war. There in the half light of dawn, hanging from the elms in the centre of the oval, a German airman, still attached to his parachute. It looked real enough – until the very realistic model was anxiously lowered to the ground. The culprits were never found!

You could supplement your sixpence pocket money by 2/6d a month working in the garden, there were scouts and guides, A.T.C., sports days and cups to win, records to break as Peter Shipley did, cross country running with athletes like Doug Phillips and Fred Pinkney, and Roy Hurd’s gymnastics. There were pets to care for, rabbits, calves, geese, goats and donkeys – one of whom, Lancelot by name, calmly ate the tulip tree at the gate one day when he wasn’t transporting manure in his little green cart. Even now on occasion Lancelot’s naughty successors, Robin and Toffee take a lot of catching when they escape from the confines of the orchard.

Sundays were special, worship in the chapel and before it was built in 1928, services were held in what was affectionately known as the ‘Tin Tabernacle’ a corrugated iron structure. The choir sang regularly, members coming from all sections and age groups of the Home. There was even cake for tea on Sunday. ‘Sandcake’, so called because it was dry, with ingredients so scarce during the war. Made in the bakery on Tuesday, they said, distributed on Thursday, and discarded on Sunday! 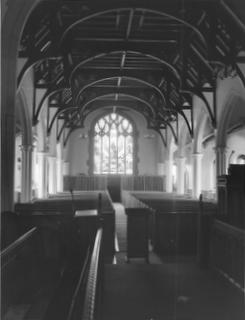 Even more special were Christmases. The ritual of Sisters woken with morning tea and carols, the Christmas Service in the Chapel, the Governor and his family doing the rounds and the toys and special things to eat that always seemed to be magically found from somewhere. Lots of love and laughter – and help from outside. Everyone stayed at least until after the festivities even those with parents and homes elsewhere, and if it snowed, there was fun outdoors too – and every family had a tree. Every window shone brightly and fires kept burning, even once when coal ran out and resourceful senior boys collected it personally from the station yard borrowing a neighbouring farmer’s horse and cart. High days and holidays, monthly parties for all those with birthdays, Open Days, holiday exchanges with those branches near to the sea and camps for the older lads, all were part of the life here at Highfield.

Yes, Ken remembers it all. His childhood, his adolescence, and as a young man, a groundsman, his marriage to May who was herself a Sister. Treasured at their home is a bible presented to May when she was ordained as a Sister after training. On it is engraved a dove in a life belt, signifying Andrew, the fisherman, and the words “To Seek and to Save that which is Lost”, a motto seldom heard nowadays and as Ken still tends his lonely kingdom with loyalty and pride, so the N.C.H.* continues giving support to those in need.

Where are they now, the 4000? Wherever, no matter what changes time and strangers bring, they will remember with affection and even gratitude, I think, the place they will always call ‘The Home’.

NB: NCH is now known as “Action for Children”.

The editors came across a copy of Jill Hunt’s article by chance, and by even greater chance, were put in touch with her in June 2015. In her reply she describes how she came to write the article:

It came about because, working in a secretarial capacity at the London & Home Counties Branch of NCH, I used to drive into The Oval in the morning, a lovely situation to work in,  and I would wonder what stories these buildings and grounds could tell if only they could speak. Ken was a gem, who would do anything for anyone; he would make sure the office was warm, every light bulb worked, ice and snow cleared before we arrived on the scene, and he had such pride in our surroundings.

I knew he had been there since childhood and it occurred to me, he was the one who could tell me about it. So I asked him, and he happily invited me to come to his home, one of the NCH staff houses just across from the Oval entrance, to meet his wife, May, who had been one of the Branch’s Sisters, caring for the children in one of the houses around the Oval.  o, armed with my shorthand notebook, I went to see them. May was lovely, ready with cups of tea and biscuits to welcome me.

“Tell me about your arrival here, Ken”, I asked – and I think those may have been the only ones I uttered, because between the two of them, each reminding the other of happenings during their lives at the Home throughout the years, they told me this story. They certainly needed no prompting, and they had a fascinating story to tell, as you can see, and I shall always be grateful to them.

Having translated my notes and put it all on paper, I felt it was such a lovely story, perhaps others might be interested so I sent it to the Hertfordshire Countryside magazine and they published it. You know the rest. Except, that in response to their invitation to readers to comment, the magazine printed two pieces which I have attached to this e-mail, just in case they may be of interest to someone. They will be added as ‘Comments’, Ed.