Memories of the NCH printing school 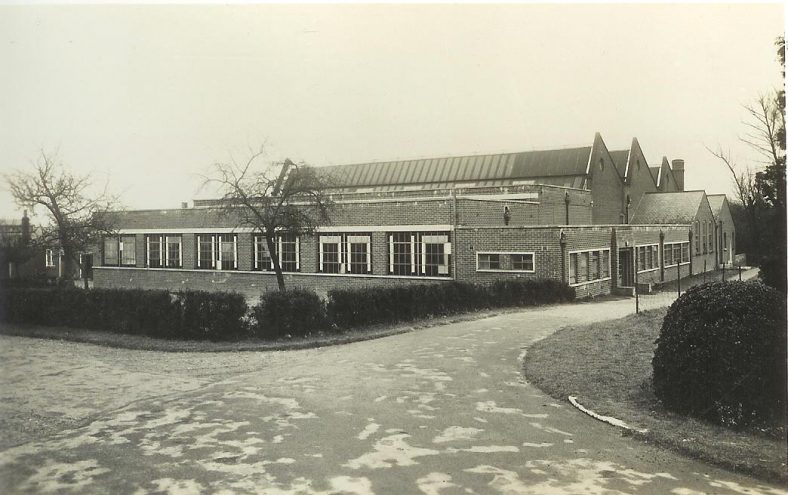 From its founding in 1871, the National Children’s Home & Orphanage attached great importance to vocational training. When the Harpenden branch of the NCH was opened in 1913, the printing technical school attached to the previous headquarters building, in Bonner Street, Bethnal Green in London’s East End, was relocated to Highfield Oval in Ambrose Lane.

The printing school building remains there today; after extensive refurbishment which was necessary to make it weatherproof, it is used as a lecture and assembly hall by YWAM (Youth With A Mission), the present occupants of the Highfield Oval site. During the 1950s, when Alan Hamblin was an apprentice at the printing school, the front of the building housed the offices of the manager – at that time Mr Basil Beck, who lived in Sauncey Avenue (and whose son Michael provided supplementary information for this article). There were also two secretaries, one of whom was Marjorie Coburn, sister-in-law of History Society founder member Amy Coburn. Next to the offices was a classroom with 12 desks, where apprentices attended lectures preparing them for their City & Guilds printing trade examinations.

Behind were the main parts of the school, whose function combined the training of boys and girls from the branch in the various skills of the printing trade, with the production of most of the NCH’s books, publications and other printed matter. Printing for the Harpenden Trust charity, including its annual Christmas Appeal envelopes, was also undertaken. 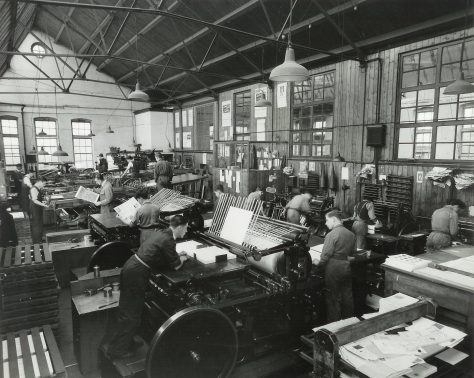 In the machine room, around 20 boys worked, under the supervision of overseers Walter Milligan, Jessie Haylor (both of whom had served apprenticeships at Bonner Road) and Frank Bickerdyke. 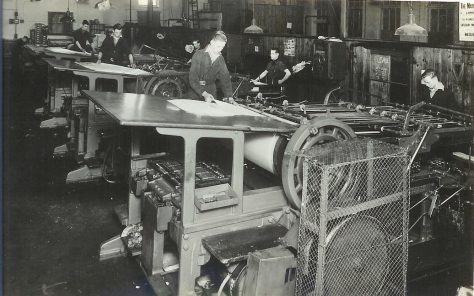 The room was equipped with seven large printing machines: two old Wharfedales, three Miehles and, in the early 1950s, a newly-acquired Heidelberg. 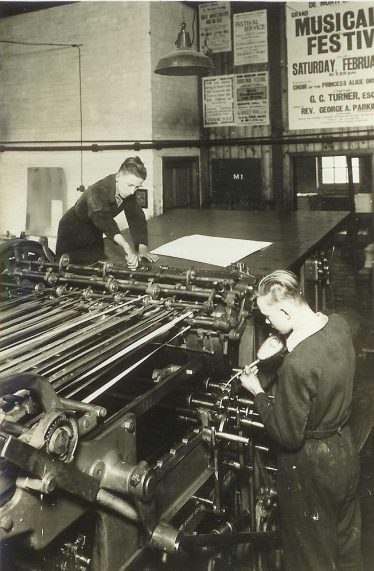 There were also seven smaller platen machines under the charge of another former Bonner Road boy, Eric French. 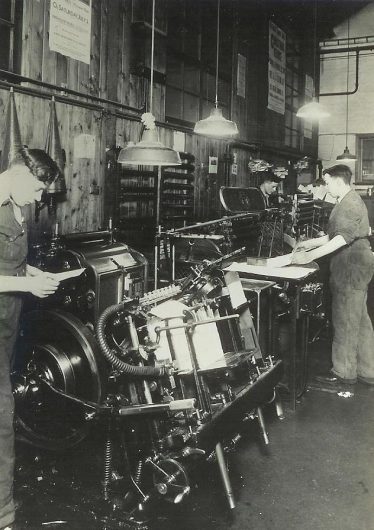 In the composing or typesetting room, where another 20 boys were employed, under the supervision of Messrs Rycroft, Shotter and Glover, were a range of monotype keyboards and many frames of typematter, much of it kept for reprint use. An elderly Mr Pluck, who had also worked at Bonner Road prior to 1913, was employed as proof-reader.  An annexe off the composing room housed the monotype caster – a ‘mini foundry’ of the kind which characterised all printing works in the days of hot metal print technology. 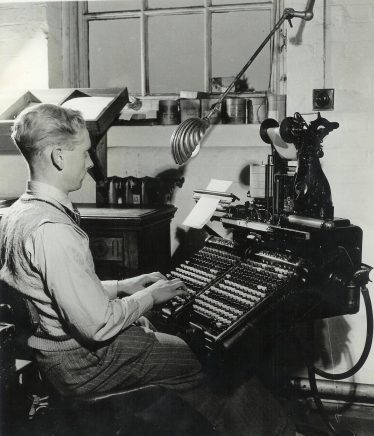 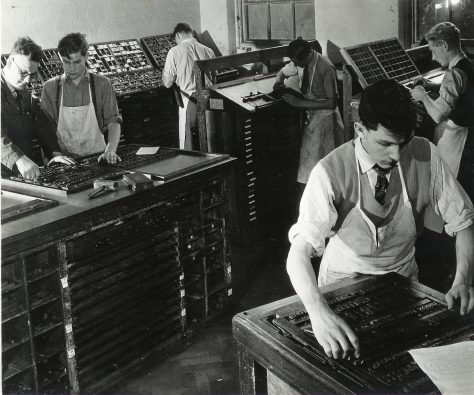 Composing room – Alan Hamblin is 2nd on the left

Another old-stager from Bonner Road days was ‘Golly’ Allgood, overseer of the one or two boys in the bindery and folding department, where the tradition of hand bookbinding was maintained. But most of the bindery trainees were girls, supervised by Ethel Howard, who had joined the Highfield Oval printing school back in 1919. 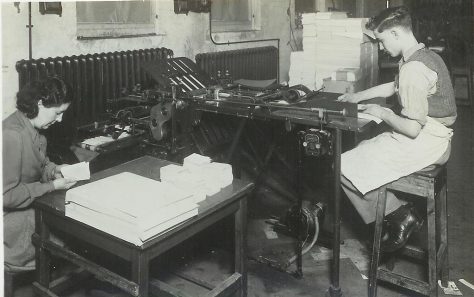 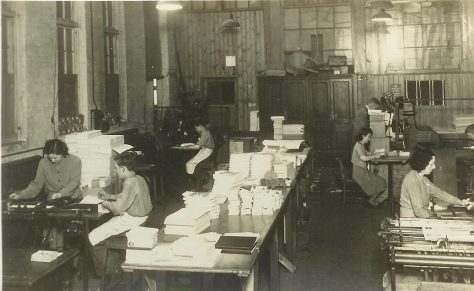 The two large guillotines in the bindery were worked by Stan Summerfield and Wilf Abbiss.

Work began at 8.00am, which was perhaps not too onerous for trainees, especially younger ones whose living quarters were in Ashcroft House, on the same NCH site, under the care of a Mr and Mrs Turner.  Older apprentices were provided with hostel accommodation nearby in Harpenden. They nevertheless were all required to clock in; the clocking-in machine was at the entrance to the composing room. Wages were deducted for every 15 minutes late.

Machine room overseer Walter Milligan wrote the words of the so-called printer’s hymn, entitled ‘The Knights of the Press’ which was sung at the annual NCH printers’ annual social, held each February.

The words ran as follows:

At the same event a game of indoor hockey was traditionally played in the branch’s Bernard Barren Hall, between composing room and machine room apprentices. 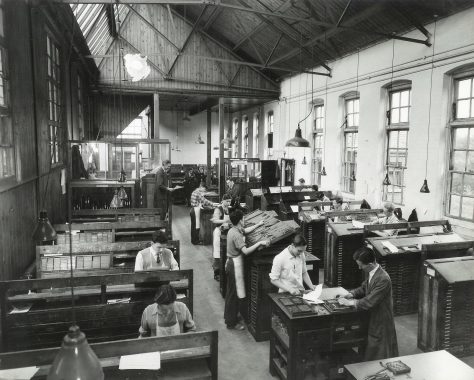 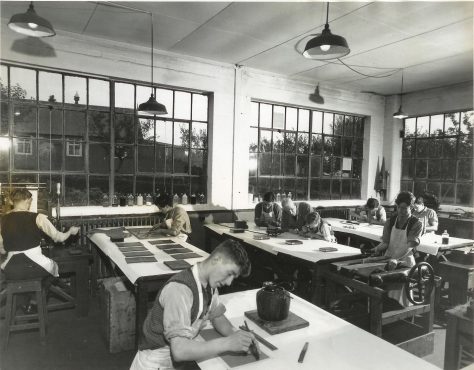 By Alan Bunting, based on information from former apprentice Alan Hamblin.